While this is set in recent years, Red Sparrow could very easily be mistaken for a Cold War-era spy thriller by John Le Carré or those of his ilk. At the center is Jennifer Lawrence as Dominika, a former Russian ballerina who has had to move on to other career choices when her ballet career is cut brutally short. She is sent by a well-meaning but corrupt relative slash government official to a school for spies, which she disdainfully calls “whore school.” There she’s taught to use her sexuality as a weapon and the rest of her body as well. Her assignment is to make contact with American agent Nate Nash (Edgerton) but whether or not she is following orders remains to be seen.

This doesn’t particularly add anything to the espionage thriller genre but it doesn’t disgrace itself either. There are plenty of twists and turns in the plot, enough so that the studio sent an e-mail pleading with critics to reveal as little about the plot as possible which in this case is justified – the less you know about what actually happens, the better your enjoyment will be of the film.

The surprising thing about the movie is star Jennifer Lawrence. She has been for several years now one of the most reliable and talented actresses in Hollywood, but this one she falls quite a bit short. Her Russian accent is unbelievable and it slips throughout the movie. Lawrence is a lot of things but she is not a ballet dancer; she doesn’t move like one and any woman who has been through the kind of training that lands you a spot on the Bolshoi is going to have a certain elegance and grace in her every movement.

This is pretty much standard spy stuff, although granted with a surfeit of graphic mayhem, torture and yes, rape. I think some women, particularly those who are sensitive to how women are portrayed as sex objects, are going to have some serious problems with this. It’s not quite misogynistic but it’s close. This is one well worth skipping which is a first in J-Law’s otherwise glittering career. I guess she’s just due for a misstep. 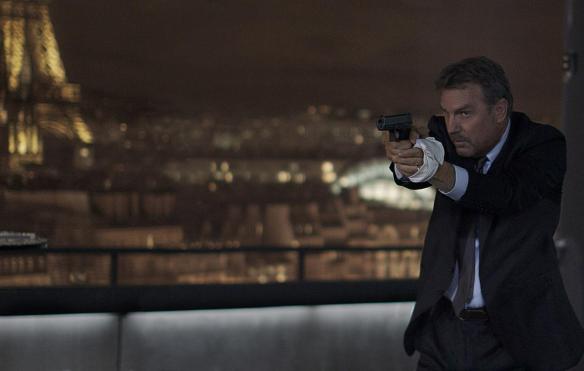 The ties that bind are often stretched, if not severed, by the needs of our careers. Success requires a certain amount of attention that is usually stolen from that which we turn on our homes and families. It is from there that we rob Peter to pay Paul.

Ethan Renner (Costner) has been living that life longer than he can count. It has cost him his wife Christine (Nielsen) and his daughter Zoe (Steinfeld) who live in Paris and rarely speak to him and find no real reason to seek that kind of thing out. Of course, Ethan has a somewhat unusual career – he’s an assassin for the United States government.

He has been sent to take out the Albino (Lemarquis), the right hand of a German arms dealer nicknamed the Wolf (Sammel). However, the meticulously set up hit goes sideway when the Albino recognizes one of the agents (Le), dispatching her in a particularly gruesome fashion. Ethan himself gives chase and has the Albino in his sights but collapses, nose bleeding and barely able to breathe. He manages to put a bullet in the leg of the Albino before passing out.

It turns out that Ethan isn’t well at all. He has a brain tumor that has spread into his lungs because, you know, the brain and the lungs are connected. He doesn’t have much time left to him; a few months at most. Faced with his own mortality, Ethan decides that killing for his country doesn’t have the same appeal and decides to spend what time he has left reconnecting with his wife and daughter.

While he tells his wife about his condition, he keeps that information from his daughter. Zoe is a typical teenage girl; sneaks out to go party with friends, check. Underage drinking, check. Argues with her mom like cats and dogs, check. Dresses inappropriately, check. Subject to wild mood swings that defy logic and reason, check. Yup, typical teenager girl.

Ethan is doing his best but it’s not a smooth integration into their lives. However, when Vivi Delay (Heard), a fellow assassin, shows up with an offer of an experimental drug that might give him a significantly longer life span in exchange for finishing his job and taking out the Wolf and the Albino, he leaps at the chance. He goes after the Albino’s driver Mitat (Andreoni) and finds him to be a family man who commiserates with Ethan’s dilemma with Zoe.  Through the hapless Mitat Ethan looks to work his way up the chain until he gets his man.

Unfortunately, the miracle cure has a few side effects that always seem to rear their ugly heads at the most inopportune moments. Ethan, who’d distanced himself from his own family so that the ugliness of his job doesn’t touch them, finds that they are being drawn in anyway. The whole point of taking this cure was so that he could have more time with Christine and Zoe but it only takes one well-placed bullet from one of the Wolf’s men. A bullet through the brain still has no cure.

This is fairly pedestrian espionage stuff. We’ve seen similar things with Jackie Chan, Vin Diesel and the Rock in the lead and with similarly mixed results. Costner isn’t really known for being an action star, although he has done a few films in his career that have required that element and to be honest, he can be quite good in that kind of role.

In fact, Costner is really the best thing this movie has going for it. He’s likable and down to earth, so we get a spy/killer who isn’t suave, who isn’t refined but is kind of rough around the edges. He’s had to reinvent his career to a certain extent, becoming more of a character actor as of late rather than a leading man but make no mistake, he’s still one of the most likable leading men in Hollywood history and he remains so here. His relationship with Steinfeld as Zoe is one of the movie’s high points – it’s genuine and most parents of once and present teenagers will tell you holds some of the same ups and downs that real life parents of teens are all-too-familiar with.

Heard is a terrific actress who is thrown into a part that is just misconceived from the get-go. She appears periodically in different wigs and looking like she just got off the runway at Milan, chain-smoking with a sardonic grin and far too young to be a master spy yet here she is. In fact, she oozes competence so much that one wonders that with her skills why does she need Ethan at all (the answer is that Ethan is the only one who’s actually seen the Wolf and might recognize him). Still, while I get the sense she had fun with the role, it’s just so badly laid out that it becomes distracting for all the wrong reasons.

The hallmark of a Luc Besson movie is well-done action sequences and there are several here that will keep action fans if not happy, at least not walking out of the theater. There’s nothing here that’s overly imaginative or challenging but it at least is professionally done so there is entertainment value throughout. The Wolf and the Albino, while having nifty monikers, lack any sort of menace. They both scowl a lot and other than the one scene where the Albino executes a female agent, you don’t get a sense that they pose any threat to Ethan or anyone else in the movie. They’re more or less just goals for Ethan to achieve and it’s more of a game of hide and seek rather than spy versus spy.

REASONS TO GO: Costner and Steinfeld are solid. Some decent action sequences.

FAMILY VALUES:  Plenty of action, a bit of sexuality and a fair amount of foul language.

TRIVIAL PURSUIT: While filming in Belgrade, Costner was given an audience with Serbian Prime Minister Ivica Dacic.

COMPARISON SHOPPING: From Paris With Love