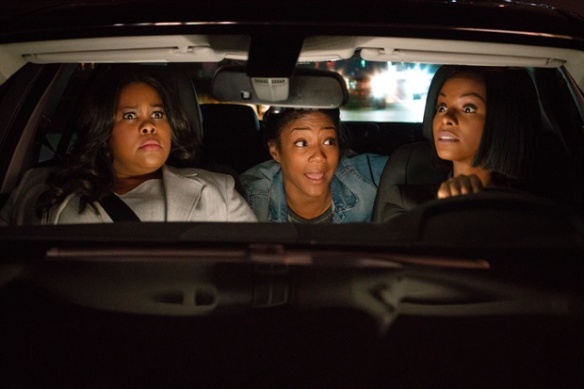 A buncha girls in cars.

Tiffany Haddish is one of the hottest comedians in the world. Tyler Perry is literally a brand name in African-American cinema. It would seem to be a match made in heaven. Instead, it’s a godawful mess.

For one thing, Haddish is basically an extended cameo. She plays Tanya, the recently released from prison sister to affluent, successful Danica (Sumpter) who has just landed a big contract at the marketing firm she works at, and is long-distance dating Charlie (Brooks), a man she has never seen or been in the same time zone with. Tanya thinks she’s being catfished – ironically (or not) a program on MTV, which is owned by Paramount’s parent corporation. Tanya even gets the hosts of Catfished (Joseph and Schulman) to investigate. Meanwhile, there’s lovesick Frank (Hardwick), the coffee house owner who is completely smitten with Danica but doesn’t quite measure up to Danica’s succinct list of qualities her husband must have. Apparently in Tyler Perry’s world, all single women have such a list.

The problem with the movie is that it really isn’t very funny, and when you’re talking a rom-com, that’s half the promise. Oh, there are a few momentary chuckles – mostly supplied by Haddish – but she’s a fish out of water here. This really isn’t a movie that utilizes her talents very well and quite frankly, there have been damn few of them that she’s been in that have. It’s like she’s trying to out-Madea Madea and we all know that’s just not possible.

Sumpter does a lot better. She’s a natural rom-com lead and while she looks somewhat flustered when she’s with Haddish, she does the upscale African-American woman maybe better than anyone. Sadly, the plot goes meandering into all sorts of different territories – a Perry trademark, and like most of his films it hits and misses. This one is much more of a miss; it’s one of the weakest movies in the Tyler Perry catalogue and it shouldn’t have been. I think he would have been better served to make a movie around either Haddish or Sumpter – but trying to do both doesn’t serve the film well, and since Haddish is absent from nearly the entire second half of the movie, it leaves audiences giving puzzled looks at their TV screen, wondering where their star went to. I’ll tell you where she went – she’s on an extended coffee break in Frank’s shop. Watching her do that would have made a better movie than this one.

REASONS TO SEE: Sumpter has real talent and should be getting better parts.
REASONS TO AVOID: Too many rom-com clichés. Too much overacting from Haddish.
FAMILY VALUES: There is profanity (including sexual references) as well as sexual situations and some drug material.
TRIVIAL PURSUIT: This is Perry’s first film for any studio other than Lionsgate.
BEYOND THE THEATERS: Amazon, AMC On Demand, AppleTV, Epix, Fandango Now, Google Play, Hulu, Vudu, YouTube
CRITICAL MASS: As of 2/29/20: Rotten Tomatoes: 24% positive reviews: Metacritic: 39/100
COMPARISON SHOPPING: Why Did I Get Married?
FINAL RATING: 4.5/10
NEXT: Murder Death Koreatown

This is not your daddy’s Santa Claus.

We’ve all seen origin stories of the big guy in Red before. No, I’m not talking about Shazam! I’m talking about the real big guy. Santa. Claus, even.

This delightful animated feature has the distinction of being the first animated feature to be distributed by streaming giant Netflix (after a brief theatrical run) and it will have the added bonus of making animated feature aficionados wish that Netflix would have made it more widely available in theaters, because the animation is that gorgeous, with a hand-painted look that hasn’t been seen since the halcyon days of Disney, which is where director Sergio Pablos cut his teeth, by the by.

The film is about Jesper (Schwartzmann), the indolent scion of a politically connected and wealthy family. Jesper, the son of a Central European country’s postmaster general, is coasting his way through life, shirking work whenever possible and looking forward to using his family’s political connections to maintain his lifestyle of personal butlers, espressos on demand and silk sheets. However, his father has different ideas. He exiles his son to Smeerensburg (which is based on a Finnish town that no longer exists), a town above the Arctic circle where no letters have been mailed in years.

It turns out there’s a reason for that. The town is run by two families that have been feuding for centuries, the Krum family whose matriarch (Cusack) absolutely hates the patriarch (Sasso) of the Ellingboe family. The two family heads have recruited the children into a vicious cycle of hate and pranks which gives the film a kind of Looney Tunes feel and also a kind of warped satisfaction as the lazy Jesper is often the butt of the children’s tricks.

Through a convoluted set of circumstances, Jesper meets Klaus (Simmons), a lonely and isolated woodsman who has deliberately isolated himself for reasons that are made clear later. He has a gift for wood carving and eventually delivers a toy to a young child whose melancholy drawing touched his heart. Jesper, recognizing a scam when he sees one, induces the kids to write letters to Klaus to get him to send them toys; he just needs six thousand of them to be released from his exile. He utilizes Alva (Jones), a teacher who came to a town where none of the kids attend school, to teach the kids to write letters. She has resorted to converting the school to a fish market in order to make ends meet and save up enough to get out of that crazy town. But as the kindness of Klaus begins to affect the children, Mrs. Krum and Mr. Ellingboe begin to plot to end this change which threatens the status quo.

The movie starts out a bit slowly and the early Looney Tunes section might pale in comparison with classic cartoons, but it picks up steam as it goes along and never fails to charm. Kids will be entranced with the lovely images and adults will find the movie heart-tugging – the ending in fact is likely to generate more than a few tears from sensitive viewers. I, myself, loved it.

As Christmas films go, this one is certainly superior to the glut of direct-to-home video projects that make up the bulk of what’s available at this time of year. Klaus is the kind of movie you and your kids will want to see again and again, year after year. That’s the kind of Christmas gift that keeps on giving.

REASONS TO SEE: The animation is magical. The film is charming throughout, with the ending being absolutely wonderful.
REASONS TO AVOID: It’s a bit of a slog during the first third.
FAMILY VALUES: There is some rude humor as well as mild animated action.
TRIVIAL PURSUIT: This is the first hand-drawn animated film to make use of CGI lighting techniques to give it almost a 3D feel.
BEYOND THE THEATERS: Netflix
CRITICAL MASS: As of 12/8/19: Rotten Tomatoes: 92% positive reviews: Metacritic: 63/100.
COMPARISON SHOPPING: Santa Claus is Coming to Town
FINAL RATING: 7.5/10
NEXT: The Boy, The Dog and The Clown