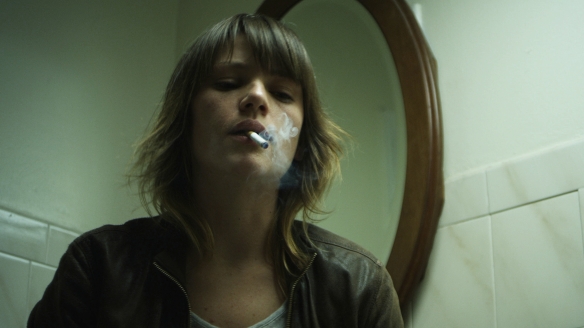 Nancy is all smoke and mirrors.

It doesn’t take much to annoy most of us. Petty little cruelties can prey on our minds. Most of the time we just brush it off and simply classify the perpetrator as a jerk and move on. Once in awhile however something just captures our brains and we get obsessed by the injustice, determined to exact our measure of triumph out of a situation in which we feel wronged.

Paul (Rogers) is a doctoral candidate at Yale, working on a thesis that follows the description of the English political process described by Charles Dickens in his classic novel Little Dorrit. To that end he has his own hardcover in which he has written notes covering the subject.

Life is actually pretty good for Paul. He’s just moved in with his beautiful girlfriend Jen (Lawrence) who is supporting him while he works on his thesis, which he is finally ready to start writing. However as he’s unpacking, he discovers to his chagrin that the crucial copy of the book has been left behind at his old apartment. Therefore he calls his old roommate Nancy (Hendricks) to see if he can drop by and pick up the book.

Days go by and he hears nothing. He is beginning to get frantic. His best friend Charlie (Fontana), a fellow doctoral candidate, urges him to simply drive over to his apartment and knock on the door. s they do, Paul is certain he glimpses Nancy inside but she doesn’t answer the door. The door turns out to be unlocked but Paul feels awkward about going in so he continues to wait.

The cat and mouse game between Paul and Nancy continues, escalating. Nancy does return his call a couple of times but always when Paul is unavailable. Paul is becoming obsessed, certain that Nancy has some sort of vendetta against him. Jen is becoming irritated because Paul is neglecting to do things around their house that he’d promised to do, forcing Jen who is supporting them to have to take care of things that Paul has more time to deal with.

However Paul is too busy dealing with Nancy to really focus on anything else. His faculty advisor, Dr. Bannister (Nelson) is growing impatient; it has been two years since Paul began his doctoral work and he has shown little or no movement in getting his thesis done. She is threatening to have him removed from the program. Paul’s stress is turning to desperation; he needs that book. So finally after a good deal of prodding from both Charlie and Jen, he decides to go in using a spare key Jen had when she used to come by the apartment to visit him and just get the book himself. This plan turns out to be disastrous.

Humiliated and physically injured, Paul’s paranoia about Nancy is reaching the boiling point. Jen, seeing that things have gone far out of control, finally takes matters into her own hands and in her mind (and in any other reasonable person’s mind) resolves the situation. But in Paul’s mind things are far from over…

This isn’t an easy film to sit through. I think that this is best described as a horror film that is going on only in the lead character’s mind. The innovative thing here is that it’s not actually a horror movie to anyone but Paul. Paul sees Nancy as some sort of cruel monster and she’s a vindictive bitch to be sure but Paul is about as passive a character as you’re likely to meet. He is so aggravating that Da Queen, not normally given to such hyperbole, proclaimed him the biggest pussy in the history of movies. She may have a point.

But so many male indie film leads could be described using that pejorative and you wouldn’t be far wrong and I think that part of the filmmaker’s intent is to satirize the somewhat cliché indie  saw of a passive male lead whose life is resolved either by a strong female presence or through some sort of external motivation. As someone who has seen his life transformed by the love of a good woman, I can’t argue that a man can’t find self-confidence and an improved sense of self-worth through that process. I can say though that it is used far too often in indie films of late.

The focus of the movie is on the antagonists Nancy and Paul and somewhat refreshingly it is more vital for those two to have chemistry than for Paul and Jen to have it and in fact that is the case. Hendricks gives a strong performance in a role that is pretty thankless; Nancy really doesn’t have any reason not to give Paul the book other than to inflict punishment for some sort of transgression – I assume it’s because he had the gall to move out on her. Given her actions it’s not surprising that he’d want to.

Even more thankless is the role of Paul. He’s the nominal “hero” of the piece but he’s far from heroic. In fact, the danger here is that Rogers might be too good in the role – he certainly makes Paul an unlikable lead, to the point where Da Queen really didn’t like this movie once. While my wife and I have nearly identical taste in movies, this is one instance where we disagreed somewhat significantly. I liked the movie precisely for the reason that she didn’t – because the filmmakers have the courage to present a lot of unlikable people in a situation that could easily be resolved but isn’t. Real life is often that way.

Maybe I can see a little bit of myself in Paul. I certainly am the sort who avoids conflicts whenever possible and I tend to let life walk all over me. My ambitions tend to be overridden by my shyness and I tend to need a bit of nagging to get moving on things I know have to get done. However I’m nowhere near as bad as Paul is in that regard – I can self-motivate and even if I do procrastinate on some things they do get done in a timely manner, just not in an instantaneous manner most of the time.

Personal identification aside, I can heartily recommend this movie because it is different and the filmmakers are showing how a simple situation can get complicated in a hurry. I admit that the movie has grown more on me than it did make an immediate positive impression and that may well be the case for you, but if you want to try something outside of the usual kind of movie this is a good place to start.

REASONS TO GO: Love the juxtaposition between the paranoid fantasy going on in Paul’s mind and the mundane reality.

REASONS TO STAY: Possibly one of the most frustratingly passive lead characters ever.

FAMILY VALUES:  There’s some brief violence, adult situations, a bit of sexuality and a modicum of expletives.

TRIVIAL PURSUIT: While the film is set in New Haven, it was mostly filmed in Brooklyn and other New York City locations.

CRITICAL MASS: There have been no reviews published for the film for either Rotten Tomatoes or Metacritic.

NEXT: Be Good and more 2013 Florida Film Festival coverage