There are those who insist that we are not alone in the universe. Certainly the law of averages agrees with them; there are so many habitable planets in this galaxy alone that the odds are that life has evolved on at least some of them and of those that life evolved on, the odds are that intelligent life has evolved on at least some of those. Some perhaps even intelligent enough to invent faster-than-light space travel; some perhaps curious enough to explore this big blue marble.

David Huggins at first glance seems like an ordinary 72-year-old man in Hoboken, New Jersey. He works part time at a deli; he’s quiet but personable and radiates a grandfatherly kindness. He spends most of his time painting, a passion of his that at one time he wanted to turn into a career but that never materialized, alas.

David has a strange story to tell; as an 8-year-old living in rural Georgia he began to receive visits from creatures not of this world. As a 17-year-old, he lost his virginity to an alien woman he called Crescent; for six years she would be what he termed his “girlfriend” and they had regular…er, conjugal visits.

He largely forgot about his bizarre past until the episodes began showing up as paintings that he felt compelled to create. He had gone on to marry a fellow artist and had a son (Michael) by her but Michael was apparently not his only child. David recalls a hybrid alien child who Crescent informed him was his child and it was dying. Clearly he was distraught about the situation but it eventually ends with the child surviving; and as it turns out, the hybrid had many brothers and sisters.

Skeptics are going to have a field day with this; Abraham doesn’t do much to argue with any of David’s claims. I can understand why; David certainly seems pretty sincere in his beliefs and while there may be alternate explanations for what David has experienced, they aren’t explored and one gets the sense that Abrahams is giving David the benefit of the doubt and accepting his story at face value. Not every filmmaker would have the objectivity to do that.

One of the things that annoyed me about the documentary was the music. Derk Reneman alternates between Korla Pandit-like organ noodling to electronic burbling. It’s very repetitive and very noticeable which is not what you want out of your soundtrack. However, it’s offset by the visuals of the paintings themselves which Huggins himself admits are heavily influenced by impressionism but aren’t quite in that genre. They are quite interesting albeit a little on the fantastic side. Some won’t connect to them much but art is always – always – in the eye of the beholder.

There aren’t a lot of talking heads in this (other than David himself) until the end of the barely an hour long film and for the most part they all agree that David is a very nice guy and sincere in his beliefs. His son Michael appears and is very diplomatic; one suspects that while he loves his dad he finds his beliefs somewhat eccentric. In any case, Michael has moved to Thailand with his family and seems well-adjusted enough. Conspicuous by her absence is David’s wife Janice who declined to be interviewed for the film. One wonders if the marriage itself is on stable ground or if Janice just finds her husband’s stories annoying. I can imagine it’s a very different experience living with someone who has these tales to tell.

This isn’t an essential movie by any means but it is entertaining and while it is unlikely to change your mind about the existence of extra-terrestrials, it will at least fill up your hour with an unusual take on them. The movie is widely available on VOD (see below) and if you enjoy biographical documentaries about unusual people or if you’re just reasonably interested in alien abductions, this might be something new for you to consider.

REASONS TO GO: The viewer gets the sense that Huggins is absolutely truthful or at least believes himself to be. The paintings have their own strange beauty.
REASONS TO STAY: The score is often annoying and cheesy. The narrative bounces all over the place without a lot of flow to it.
FAMILY VALUES: There is much sexuality and some nudity in paintings.
TRIVIAL PURSUIT: This is Abrahams’ first feature-length documentary as a solo director (he also co-directed last year’s On the Back of a Tiger.
BEYOND THE THEATERS: Amazon, Fandango Now, Google Play, iTunes, Vimeo, Vudu, YouTube
CRITICAL MASS: As of 12/13/17: Rotten Tomatoes: 88% positive reviews. Metacritic: No score yet.
COMPARISON SHOPPING: Communion
FINAL RATING: 6/10
NEXT: Boss Baby 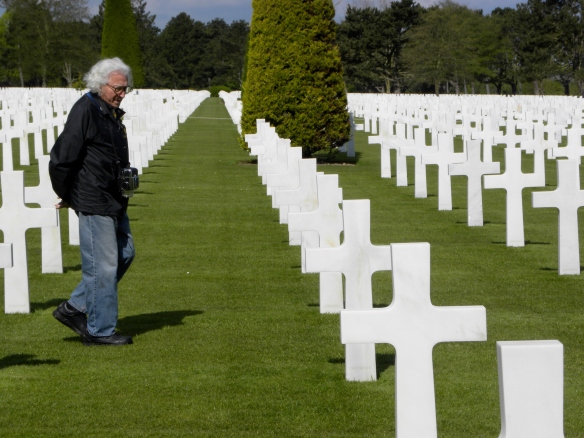 Soldiers are a special sort of breed, one to be admired immensely. Not only are they willing to lay down their lives for their country but they often return home damaged – particularly during times of war. They are forced to do things that go against everything they are taught (i.e. Thou Shalt Not Kill) and they see things – horrible things – that reflect humanity at its absolute worst.

Tony Vaccaro was barely out of high school when he was drafted to serve as an infantryman in the Second World War. Orphaned at a young age in Italy, he left that country and moved to New Rochelle, NY when the Fascists took over. While in high school, he developed an interest in photography and when he was drafted, applied to the Army Signal Corps to take photographs for them. He was turned down, told that he was too young for the Signal Corps. “I’m too young to take pictures,” he reflects in the documentary about his 272 days in the service of his country during which he took more than eight thousand photographs, “But not too young to kill.”

At one point he finds a soldier frozen in the snow. Curious as to whom the victim was, he is horrified to discover it is Henry Tannenbaum, a childhood friend. Years later, Tannenbaum’s son Sam saw the picture of his father at an exhibition of Vaccaro’s work and called up the photographer. When Tony found out who was on the other end of the line, he wept but for Tannenbaum, the picture gave him some closure and made his father, whom he had no memory of, more real to him. The two men became friends and visited the site where Tony found Henry’s body. Ironically, the place is now a Christmas tree farm (Tannenbaum is Christmas Tree in German).

One of the hardest photographs he ever took was that of a German woman, who had been raped and murdered by Allied troops after she’d been found with a bazooka, and then stabbed in her vagina with a bayonet. At first Tony was horrified and he removed the blade and covered the dead woman up. However, he went back and put her back the way she was when he found her and snapped the picture before then covering up the body and removing the blade once again. He had set out to document his experiences and he felt it wouldn’t be true to his mission if he didn’t document that as well, but he remarked it would be the most difficult of all the pictures he’d shot, including that of Tannenbaum.

In an era where photographs were routinely staged, Vaccaro’s pictures stand out because they were real. While sometimes soldiers would refuse to have their pictures taken by outside photographers, Tony was trusted. He was one of them, a brother. They would pose for him sure but they also allowed him to turn his cameras on them when they were fighting for their lives and the lives of their brothers. No other photographer in any war, before or since, has gotten as close to the soldiers fighting it as Vaccaro did. The incredible pictures he took reflect that. War is undoubtedly hell, the kind of hell that only those who have been to the front lines of war can understand. The photographs of Tony Vaccaro help those who have never been to war to gain at least a little bit of understanding.

Vaccaro is front and center here and he reminisces about some of the things he took pictures at from the places he took them in 70 years later. We see him on the beach at Normandy where he was part of the Allied invasion on Omaha Beach; the quaint French village which was largely untouched by the fighting; the woods where a horrific battle was fought. His memory is incredibly clear for a 94-year-old man.

His interviews are augmented by commentary by contemporary combat photographers who are singularly admiring of the job Vaccaro did, often going from firing his M-1 rifle to grabbing his camera and snapping pictures. In one incredible moment entitled “The Last Step of John Rose” an infantryman throws both hands in the air as a mortar explodes behind him. Shrapnel is already lancing through his body and with his next step he will crumple to the ground. “Suddenly, life comes to an end and gravity takes you,” Vaccaro reflects. “Giving up life, we all go down to earth again. All of us.”

After the war, Vaccaro stayed in Europe, unable to return home. He was caught in the grip of what is now called Post Traumatic Stress Disorder, although they didn’t discuss such things then. He put his negatives in storage and left them there until recently; even though he had documented his experiences, he was not disposed to sharing them although eventually he did. He would eventually continue following his passion for photography, becoming a fashion and celebrity photographer for Life magazine and others.

But despite a lifetime photographing beautiful things and beautiful people, he remains close to the pictures that haunted him from the time he took them until now. “There is beauty in tragedy,” one of the commentators intones and there is truth in that. The picture of a frozen soldier in the snow is awful to contemplate but has a certain serene beauty to it that is hard to ignore. So is this documentary, which is worth looking into.

REASONS TO GO: The photographs are absolutely extraordinary. Vaccaro is still emotional about his time on the front lines and that emotion only enhances the film.
REASONS TO STAY: Those sensitive to death and mayhem may find the photographs too disturbing.
FAMILY VALUES:  There is some profanity some gruesome images of war and brief nudity.
TRIVIAL PURSUIT:  The Argus C3 35mm camera that Vaccaro used throughout the war cost him $47.50 as a used (or secondhand) camera back in 1942.
BEYOND THE THEATER: HBO Go
CRITICAL MASS: As of 1/4/17: Rotten Tomatoes: No score yet. Metacritic: No score yet.
COMPARISON SHOPPING: Fury
FINAL RATING: 7.5/10
NEXT: Collateral Beauty