You’ve probably seen this one before; a billionaire decides to unleash a world-ending catastrophe being opposed by a dedicated spy of undeniable physical skills. Then again, saving the world isn’t what it used to be.

In this hot mess by veteran Hong Kong action director Alan Yuen, social media extreme sports star Zhao Feng (Wang) literally drops in on a meeting of criminal gangs who are delivering the gas to the billionaire in exchange for the (wait for it…you guessed it…(wait for it)…Holy Grail. Indiana Jones would be rolling in his grave if he had one. Graham Chapman certainly is.

Feng is rescued from the gun-toting baddies by Bruce (Jovovich), a stone-faced agent for the Order of the Phantom Knighthood (I’m not making this up) and who now recruits Feng into the Order to help them steal the Grail from its current resting place in the collection of a Hungarian squidillionaire and keep it safe while protecting the world from the crazed Iron Fist (McInnis) who frequently talks to his dead wife’s eyeball, which he keeps preserved in a jar. Doesn’t everybody?

Feng is joined in his quest by a ragtag team of other novices; Miao Yan (Pinna), a cop with anger management issues, Ding Shan (Xu), a somewhat eccentric genius and crackpot inventor, and LV (Liu), an unemployed doctor who worships Ding and cheerfully tests his dangerous inventions. Feng’s own exaggerated ego may come back to haunt the team as they race against time and the odds to save the planet. Can these rookies succeed where seasoned pros have failed?

Like many Hong Kong action films dating back to the 80s and 90s, there is an absurdist streak that is rampant in the film, something that Hong Kong audiences tend to accept a bit better than their American counterparts. However, Yuen takes it to new heights (or depths) in this case with sight gags that fall flat and quips that lose something in translation. And speaking of translation, the distributors elected to dub this rather than subtitle it which is not always a good idea. Unfortunately, some of the signs and titles go untranslated which is frustrating to those who don’t read Mandarin, and we get the sense that the translation may not be all its cracked up to be.

But most folks watch these sorts of films for the action sequences and those are in general right on the money. Feng may be an insufferable boob whose face you may want to punch ten minutes into the movie, but Wang (or his stunt double) is a pretty able action star which does take some of the sting out. Jovovoich, ever the consummate pro, does what she can here until her character is sidelined way too early in the movie and she is more or less out of the picture from then on.

The CGI tends to be pretty weak here, but from what I can tell Chinese audiences tend to be a lot less discriminating in that regard, so take that for what it’s worth. There is some entertainment value here, but American big-budget action fans are likely to find this primitive, dumb and unsatisfying, but those who have already embraced Hong Kong action films for the delights that they are may find this a worthwhile investment of their time.

REASONS TO SEE: Some nifty action sequences.
REASONS TO AVOID: The lowbrow humor wears on you as the film goes along.
FAMILY VALUES: There is plenty of profanity, sexuality and nudity, adult themes and drug use.
TRIVIAL PURSUIT: The movie was released in China in 2019, but did mediocre business which may account for it not getting a Stateside release until now.
BEYOND THE THEATERS: Amazon, Fandango Now, Google Play, Redbox, Vudu, YouTube
CRITICAL MASS: As of 4/25/2021: Rotten Tomatoes: 23% positive reviews; Metacritic: No score yet.
COMPARISON SHOPPING: My Spy
FINAL RATING: 6/10
NEXT: Slalom 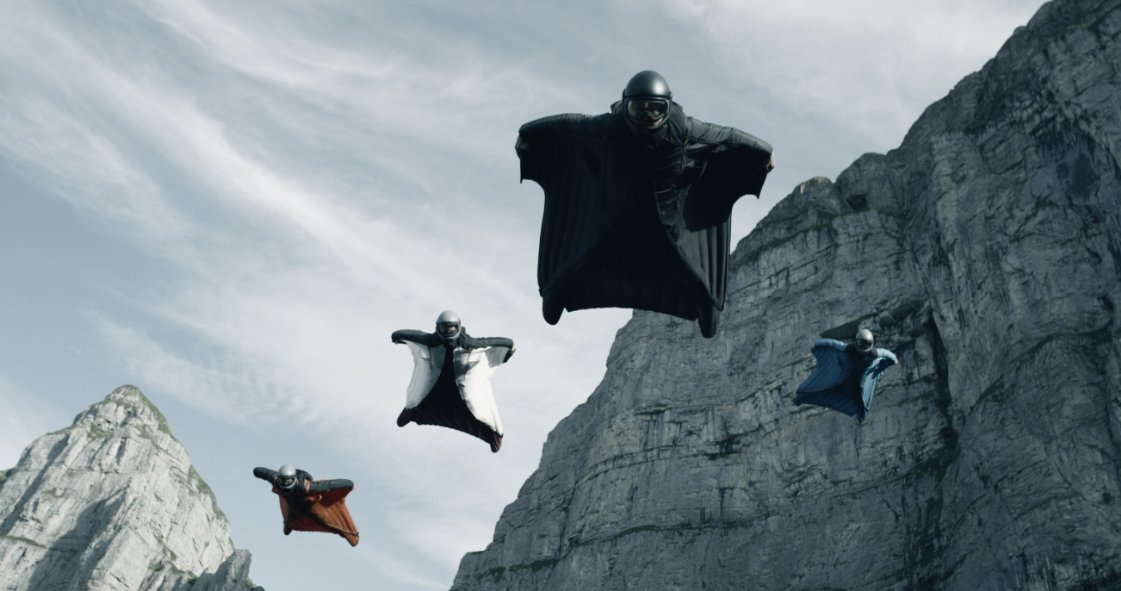 Attack of the flying squirrels.

In 1991, Keanu Reeves and the late Patrick Swayze toplined one of the most iconic action films of that decade – Point Break – and now, two decades later, a remake is in theaters. I suppose that was inevitable. In the spirit of “bigger better more,” the Ex-Presidents are now not merely surfers but extreme athletes and world class ones at that.

Johnny Utah (Bracey) is an FBI agent. He wasn’t always one. Seven years ago, he was a YouTube warrior who wanted nothing more than to film extreme motocross stunts that would get him hits on the venerable Internet video channel, but something goes wrong and a friend winds up paying the ultimate price for Johnny’s hubris. Now, he is looking at a daring diamond robbery in which the thieves escape via parachute. Later, they grab some currency from a plane, drop the bills into an impoverished Mexican village and escape via a daring sky dive into a gigantic cave. Utah, being from that world, deduces that the criminals are trying to complete the Ozaki 8, a list of extremely demanding tasks meant to test the limits of the human spirit while at the same time honoring the forces of nature.

When Johnny finds out that there are ginormous waves occurring in the Atlantic, he is certain that the thieves will be there. He is dispatched to the scene under the wing of Agent Pappas (Winstone) from the UK office. He sees a whole flotilla of ships in the region with thrillseekers attempting to surf the waves that are the size of five story buildings. Johnny was never quite as skilled a surfer as others and when he attempts to surf one of the waves, he ends up going to the bottom, only to be rescued by Bodhi (Ramirez), who takes him to a huge yacht owned by Pascal al Fariq (Kinski), one of those insanely wealthy people who have more money than they know what to do with – so they get other people to tell them what to do with it.

As Johnny gets to know Bodhi and his crew, including Grommet (Varela), Roach (Schick), Chowder (Santelmann) and the lovely Samsara (Palmer), he knows he’s found his thieves but he has to prove it. Going against orders, he infiltrates the group and goes with them to ski down insane mountain ranges and put on flysuits to jump off of mountains. Eventually he earns their trust – well, at least the trust of Bodhi and Samsara, the latter of whom he ends up in bed with – but by this time he has begun to change his mind about their motivations and perhaps sympathize with them. So when push comes to shove, which side will Johnny end up on?

This is very much a Keanu Reeves movie without the benefit of Keanu Reeves in it. As Johnny Utah, Bracey resembles Heath Ledger facially but resembles a young Reeves in line delivery and not in a good way. He’s a bit wooden and stiff in his performance. I’m not sure whether that has to do with the writing or Bracey’s ability as an actor. Hopefully it’s not the latter.

The writing is a definite problem. This is the most bro-tastic movie you’ll see, unless the threatened Bill and Ted sequel comes together. You will never hear the word “brother” used so much in a single movie that doesn’t have two males with the same mother in it. It’s definitely a film loaded with testosterone and bro-bonding and bro-mancing is the order of the day here.

I can handle that but dumb is not as easy to dismiss. The plot grows more and more preposterous as the movie goes on and one begins to see through the Bodhi character as a selfish jerk spouting off New Age aphorisms; why would anyone in their right mind follow a guy like him? He talks about giving back to the poor while murdering middle class police officers and endangering innocents all to attain his personal goal. Of course, this is a different time now and people do worship at the altar of the almighty mirror but I didn’t get that feeling from the original film.

Let’s face it; the 1991 film had something in spades that this movie has little of – fun. The original was an entertaining ride. While the stunts here are impressive – and they are impressive – there’s no soul to them. There’s nothing here that makes me feel like I’m having a good time and why on earth would you go to a movie where you weren’t having one?

REASONS TO GO: Nice stunt sequences.
REASONS TO STAY: Dumb and dumber. Too much bro-ism. Ham-fisted acting. Wastes great locations.
FAMILY VALUES: Violence and language, some stupid ideas that nobody should remotely try to imitate, a little bit of sex and a little bit of drugs.
TRIVIAL PURSUIT: This was the first film Teresa Palmer acted in after giving birth to her son, coincidentally named Bohdi.
CRITICAL MASS: As of 1/12/16: Rotten Tomatoes: 8% positive reviews. Metacritic: 34/100.
COMPARISON SHOPPING: Chasing Mavericks
FINAL RATING: 3/10
NEXT: Joy