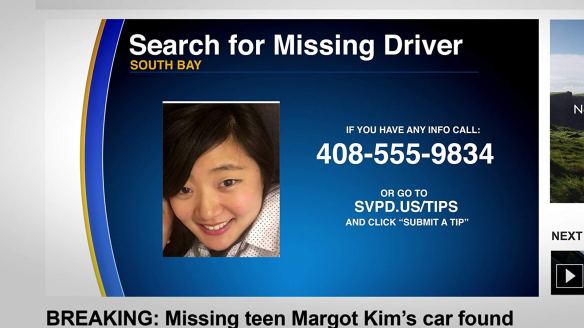 Somewhere you never want to see your daughter’s photo.

Every parent’s nightmare is for their child to go missing. In a world filled with predators who lurk disguised as would-be friends on social media sites, it is all too easy for a naïve youngster to get in over their heads in a situation that could prove to be dangerous.

David Kim (Cho) is a widower who hasn’t quite come to grips with the death of his wife and has become, in many ways, a helicopter parent, hovering over his daughter Margot (La) – the only family he has left other than his brother Peter (Lee) – to prevent the possibility of him losing her too. But when she doesn’t return home after an all-night study session and after some inquiries he discovers to his horror that she left the study session early, he calls the cops. Helpful detective Vick (Messing) gets his case and suggests he search through her laptop, which she had left at home (another ominous sign), to find out who she is close to and start contacting them.

The more David looks into his daughter’s online life, the more he realizes how little he really knew his daughter. With time ticking away and only a precious few clues as to her whereabouts to peruse, David grows more desperate.

The entire film is seen through laptop screens, smartphone screens, surveillance footage and news broadcast – very much a product of the 21st century. This could have been extremely gimmicky and towards the end it starts to feel that way, but first-time feature director Chaganty keeps things pretty fresh; he uses actual websites and apps in an effort to play to the target demographic who live their lives online. The problem with that is it is going to horribly date this movie in a matter of just a few years and it will lose its relevance quickly.

Still, Cho’s performance as a grieving husband and terrified father is universal and he is as good as I’ve ever seen him.  The director’s point of how rather than being connected by the Internet, we have actually grown more isolated and fragmented, is well-taken. Unfortunately, all the good will the film builds up is nearly lost with a preposterous ending that will lead to much face-palming, even with the online crowd.

REASONS TO SEE: Cho delivers the most powerful performance of his career. Really plays up the disconnect of the digital age.
REASONS TO AVOID: Jumps the shark a bit at the end.
FAMILY VALUES: There is a fair amount of profanity, some sexual references, adult thematic content and some drug references as well.
TRIVIAL PURSUIT: The firm where David works, AppEnsure, actually exists. It was founded by Chaganty’s father and both his parents are executives there.
BEYOND THE THEATERS: Amazon, AppleTV, Fandango Now, Google Play, Sling TV, Starz, Vudu, YouTube
CRITICAL MASS: As of 1/11/20: Rotten Tomatoes::92% positive reviews, Metacritic: 71/100.
COMPARISON SHOPPING: Unfriended
FINAL RATING: 7/10
NEXT: Mile 22