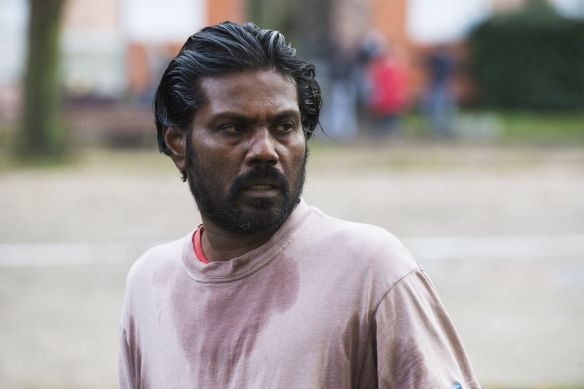 The choices of a refugee are never easy.

The issue of refugees from Asia and the Middle East in Europe is a real hot button topic these days. It was one of the key points that caused Britain to leave the European Union and the remaining countries in the Union continue to wrestle with the issue, trying to balance humanitarian concerns with an overwhelming of services in dealing with the influx of new residents.

The civil war in Sri Lanka is winding down and the Tamil Tigers, a fighting group of mostly adolescents but also young men is on the losing side. One of their number is fearful that his participation as a soldier in the Tigers will get him jailed and/or executed so he decides to flee the country. He needs a false passport and gets one for a man and his family, all of whom were killed in the war. The newly re-christened Dheepan (Antonythasan) needs a wife and daughter to make the illusion work; he recruits Yalini (Srinivasan) who is just as eager to get out of Dodge, and orphan Illayaal (Vinasthamby) who has nowhere else to go. The newly minted family takes a boat and heads to France.

They get settled in what appears to be government housing on the edge of Paris. The apartment blocks are overrun by gangs and drugs, much the same as they are here. Dheepan gets a job as a caretaker for the blocks; he often has to dodge drug deals and gang meetings to get his job done. Yalini, who is forced to don a veil when in public even though she isn’t of that religious persuasion, takes care of a disabled old man who turns out to be a former gang member whose apartment is used as a kind of office and conference room for his former gang. Illayaal starts going to a public school where she has issues fitting in – nobody wants to play with her and she reacts the only way she knows how. She also has to learn how to eat with silverware, something she didn’t have to do in Sri Lanka.

The violence they escaped however finds them as the gangs around them erupt into open warfare. The fragile bonds of this family are beginning to dissolve and Yalini is ready to leave France altogether, but still, against all odds, the forced relationship is beginning to take – if the violence doesn’t rip them apart first.

Audiard is one of France’s premiere directors of crime dramas, often taking themes that Martin Scorsese has used and giving them his own twist. This one is superimposed with a timely political issue that seems to be one of Europe’s most pressing concerns at the moment. We get to see the issue from the inside, as the refugees struggle to fit into a society that fears and mistrusts them and in fact despises them. It is clear that all they want is to live in peace but that isn’t always possible in this world.

Antonythasan is a real find. His eyes are extremely expressive; they reflect mournfulness, anger, frustration and occasionally, hope. He is generally disheveled and unkempt but is a handsome man underneath it all as his character is a good man underneath all the wariness and pain. Dheepan has real demons in his past and they are always evident – through his eyes.

Srinivasan is new to the acting game, but she also delivers a raw, uncompromising performance. Her character isn’t always the nicest and she gamely allows the nastier characteristics to be shown as is without glossing it over. In many ways, it’s a brave performance depicting brave people going headlong into the unknown with an uncertain future. It is true that they felt compelled to do it for some pretty overriding reasons but nonetheless one has to admire people who are willing to do that to find a better life. Not all of us could manage.

The objection I have to this film is that the third act eventually becomes an action hero shootout with Antonythasan Schwarzeneggaring it through the last ten minutes or so. After all of that, the ending itself is an abrupt reversal of tone, making three in about fifteen minutes. Even the most skillful directors would have a hard time pulling that off effectively and Audiard certainly has the skills, but unfortunately it doesn’t work here, at least not for me.

Even with that said, this is an impressive movie. It really forces you to see things from the refugee’s point of view and that’s a point of view we rarely get to see amid all the rhetoric of pro-refugee folks who can be condescending about the actual immigrant, and of course the anti-refugee crowd who tend to demonize them as potential terrorists and criminals. Here, Audiard seems to suggest, the refugees have more to fear from the natives than the other way around. I’m not sure that’s true in every case, but it is certainly something to consider.

REASONS TO GO: A crime drama with social commentary thrown in. Searing performances are delivered by the leads. The film addresses a real cultural concern. This is a very human film.
REASONS TO STAY: The third act turns into an action film which is a bit jarring. The daughter’s situation is neglected a little bit.
FAMILY VALUES: There’s some violence, a bit of foul language and brief sexuality and partial nudity.
TRIVIAL PURSUIT: Antonythasan was actually a member of the Tiger Tamil as a boy and made corrections to the script in places.
BEYOND THE THEATER: Netflix, Amazon
CRITICAL MASS: As of 10/8/16: Rotten Tomatoes: 89% positive reviews. Metacritic: 76/100.
COMPARISON SHOPPING: The Woman in the Fifth
FINAL RATING: 8/10
NEXT: The Disappointments Room