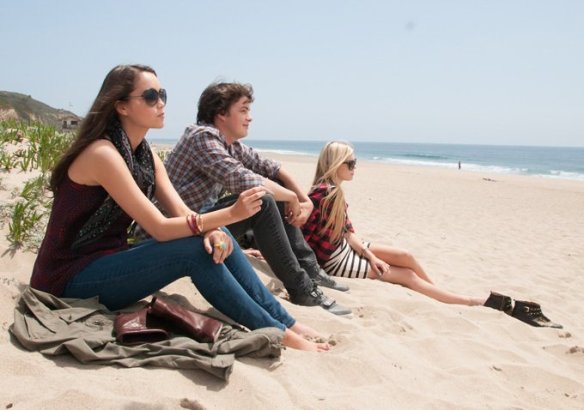 Life is a beach for the spoiled and the privileged.

It’s hard for some to recognize what America has become. Celebrity-obsessed, fame-driven, materialistic and entitled. In many ways we’re a nation of spoiled brats.

None more spoiled than the Bling Ring, a group of bored, privileged sorts who yearn to be celebrities. Rebecca (Chang) is the ringleader, more or less. She meets new kid Marc (Broussard) and find themselves with much in common. One thing is a talent for larceny as at a party the pair steal things from unlocked cars of other partygoers.

When Marc mentions offhandedly that a wealthy acquaintance is about to leave town, Rebecca spots this as an opportunity to make a big score. While Marc is reluctant – this is a friend, or at least someone he knows after all – Rebecca overcomes his misgivings and the two steal a handbag, which Rebecca notices is the same one as her fashion idol, Lindsay Lohan, owns. The two steal a Porsche and use the cash they steal to go on a shopping spree that allows them to buy the luxuries that they couldn’t previously afford.

Soon, they’re hanging out at posh clubs where celebrities like Kirsten Dunst and Paris Hilton hang out. They discover that Hilton is going to be out of town and decide to find her address and check it out. With a key conveniently left under the doormat, they gain entry and find wall-to-wall swag, so much there’s no way she’ll notice any of it missing. Rebecca begins to show off some of the jewelry she’s stolen to her friends Nicki (Watson), Sam (Farmiga) and Chloe (Julien). Unsurprisingly, the others want in.

They continue to go on what they think of as shopping sprees in the homes of celebrities who they can confirm are out of town – among the victims are Audrina Partridge, Megan Fox and Orlando Bloom. Unfortunately, the kids may be bold but they’re not bright; they’re seen on security cameras and brag about their bling on social media. This leads the cops right to them.

Coppola, who grew up surrounded by famous directors (Francis Ford, her dad, and Marc, her brother) and actors (Nicolas Cage, her cousin and Talia Shire, her aunt), has the experience to put a personal edge on the film and the directing chops to make it interesting, but curiously as frenetically paced and glamour-conscious as the movie is, there’s an oddly flat quality to it. The lead actresses all seem like their eyes are glazed over, not quite drugged but almost like they’re staring into a different place than the rest of us see. It’s a bit disconcerting.

Watson, the best-known of the young actors playing the crooks also does the best job. Her Nicki is by turns bored, peer-pressured, demanding and self-delusional. Like all of the other characters, she’s truly unlikable and her value system is virtually non-existent. These girls (and boy) are all about self-gratification and achieving fame without earning it; it’s no wonder one of the real perpetrators ended up with a reality TV show; the mentality of becoming famous for being famous is irresistible to these girls.

While Nicki’s new age mom (Mann) is proof that shallow can be genetic (or at least environmental), it’s really hard to find anything that smacks of a redeeming quality for any of them. When the poop hits the fan they turn on each other like rats. They have no empathy for the people whose homes they are invading, only a lust for designer clothes, high-end watches and of course whatever the loose cash lying around can buy them. This is the true entitlement generation rather than the welfare recipients that Fox News misidentifies in that regard. These young people believe that fame is something that should be handed to them rather than earned. I think most famous people would assure them that fame is a double edged sword and maybe these kids have learned that by now.

Coppola displays the culture of celebrity, material possession and fame obsession that we have degenerated into quite dispassionately and without judgment or comment, although perhaps by displaying the ultimately empty pursuits and absent moral compasses may be in itself a kind of judgment. We are left to watch, horrified perhaps or maybe just plain disgusted as these kids show the worst qualities of our modern society; whatever remorse they might have had seems to be more in line with being caught rather than in having done something wrong.

Because the characters are so without redeeming qualities it is difficult to find anything to relate to here, except maybe by relating to the polar opposite of what these kids are, which is harder work. I wonder how many young kids will see something of themselves in the Bling Ring; I suspect that those who are most like them will not. Most of these sorts of people can (and often do) look at themselves in the mirror all day long, but fail to see the ugliness that’s reflected there.

WHY RENT THIS: Trainwreck; you just can’t look away. Scathing indictment of our shallow society.
WHY RENT SOMETHING ELSE: Characters so unlikable that audience has nothing to identify with. Occasional bouts of “Look ma, I’m directing!”
FAMILY VALUES: Lots and lots of bad language, plenty of drug and alcohol abuse (by teens) and some sexually suggestive conversation.
TRIVIAL PURSUIT: The scenes set in Paris Hilton’s home were shot in her actual home.
NOTABLE DVD EXTRAS: There is a featurette about the real Bling Ring, hosted by the author of the original Vanity Fair article that inspired the movie, as well as an interview with Paris Hilton, one of the victims of the crimes, and her decision to allow her home to be used in the film.
BOX OFFICE PERFORMANCE: $19.2M on an $8M production budget.
SITES TO SEE: Netflix (DVD/Blu-Ray Rental only). Amazon, iTunes, Vudu
COMPARISON SHOPPING: Spring Breakers
FINAL RATING: 6.5/10
NEXT: Results