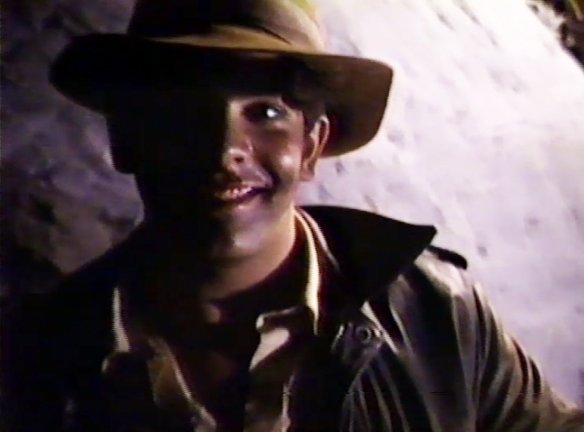 The dreams of our childhood are often set aside in favor of those things that as adults we are required to do; to create a family and home of our own, to earn a living, to raise children. Those dreams don’t die completely; they stay with us, often as regrets which is what unanswered dreams generally become.

For a trio of boys in Mississippi in 1981, that dream was the Steven Spielberg/George Lucas collaboration Raiders of the Lost Ark. This tribute to the serial pulp adventures of the 1930s really captured the imagination of these boys and inspired them. For Eric Zala and Chris Stompolos, the solution was simple; make their own version of Raiders but shot for shot like the one Spielberg directed. And, that summer, they set about doing it themselves.

For seven more summers and several winter breaks as well, they did just that. Stompolos, who played Indiana Jones, aged from age 12 to 19 onscreen; Zala (who played Belloq and was director for the venture) went from 11 to 18. They were joined by Jayson Lamb who also stayed mainly behind the camera and did much of the special effects.

They were aided by many adults who gave the kids serious leeway, allowing them to follow their dream although later on when some saw the results of their labors accused their mothers of “bad parenting,” particularly in lieu that one fiery scene set in the Nepalese bar owned by Marion Ravenwood that they created in the basement of the Zala home nearly burned the house down.

What is striking is how the boys, with zero filmmaking experience, managed to think outside the box to make things work. For example, they substituted the family dog in place of the “Sieg Heil” spider monkey that is used in the Cairo scenes. The boys were too young to drive in the truck chase, so they got someone to lend them a truck without an engine and had someone who could drive (a parental chaperon as it were) haul the truck (you can see the hauling  vehicle in a couple of shots).

The boys eventually got every scene in the movie filmed but one – the scene after Indie and Marion escape the Well of Souls and stop a Flying Wing airplane from carrying the Ark to Berlin, blowing up the plane and creating general mayhem in the process. At seven years in and their friendships frayed to the breaking point (Jayson had already left the project), they decided to call it quits.

But the idea stayed with them and it bothered Zala and Stompolos to a lesser extent that they’d pulled the plug so close to completing their dream. They took the footage they had and edited it together, made a videotape of it, staged a world premiere in their hometown and went on with their lives.

The funny thing about dreams is that sometimes they refuse to die on their own. A copy of the tape made its way to actor/director Eli Roth of the Hostel franchise. He was blown away by what he saw and arranged to have the movie shown during a meal break at Harry (Ain’t It Cool News) Knowles’ annual birthday celebration and film festival the Butt-Numb-a-Thon at the Drafthouse Theater in Austin – Tim League, the influential owner of the Drafthouse was also in attendance.

The audience was so enraptured by the adaptation that they booed when the projectionist stopped the film to prepare for the world premiere showing of a Peter Jackson Hobbit film, no less – and gave the film a three minute standing ovation. League and Knowles were both impressed. The buzz about the movie began to circulate and a cult film was born.

Eventually word got back to Zala and Stompolos, both living separate lives and the two old friends decided to get the band back together again and raised a Kickstarter campaign to fund the filming of the final scene in their hometown of Ocean Springs, Mississippi. Even so, it wasn’t easy; Mother Nature didn’t cooperate and the very pyrotechnic-heavy scene proved more difficult to stage than they’d anticipated, even with a professional pyrotechnician calling the shots.

There is plenty of footage from the Adaptation as well as outtakes and interviews (I’ve been fortunate enough to see the Adaptation twice, once in the backyard of a friend’s house and the second time as part of a Raiders! Event at the Enzian) and while it’s true that the footage of the Adaptation is crude, you do get a sense of the love and care that went into it. Because of copyright laws, it is next to impossible to view the Adaptation theatrically, but it can be done so if you’re interested, contact your local art house theater and have them look into it.

The movie is about the heart and soul of a dream. Kyle Smith of the New York Post, who has distinguished himself as being one of the most clueless film reviewers in the country, sniffed that the venture is like “rewriting Moby Dick in crayon.” For one thing, he oversimplifies the difference between copying and adapting. The boys with no training at all proved to be resourceful and persistent, both traits that should be encouraged rather than torn down. They showed their love for a film that by paying tribute to it, putting their own stamp on it at the same time. Both of them, since this documentary was completed, have formed a production company of their own and quite frankly I’m eager to see what they turn out next (Lamb also works in the industry). Either way, this is the kind of movie that may inspire others to follow their dream, be it remaking a beloved movie shot for shot or making a movie of their own.

REASONS TO GO: One of those movies that sneak up on you and lift your spirits. Fascinating story.
REASONS TO STAY: Not everyone will get why this story is inspiring.
FAMILY VALUES: A little bit of foul language.
TRIVIAL PURSUIT: Zala for awhile lived and worked in Orlando for EA Sports as a game developer.
BEYOND THE THEATER: Amazon
CRITICAL MASS: As of 6/27/16: Rotten Tomatoes: 93% positive reviews. Metacritic: 70/100.
COMPARISON SHOPPING: Burden of Dreams
FINAL RATING: 7.5/10
NEXT: March of the Living