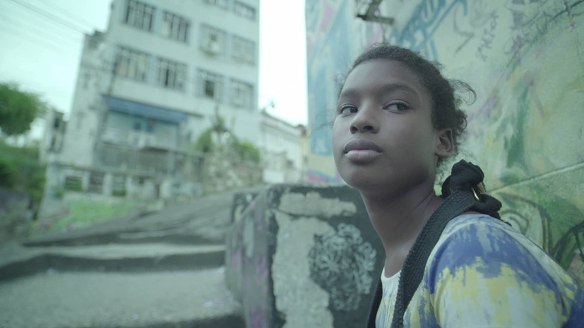 You have to grow up fast in the favelas.

The favelas of Rio de Janeiro have long been the home of the working and poor classes of the city and as such a breeding ground for crime. They have also been a fertile location for some of the best films to come out of Brazil over the years.

Prior to the 2016 Olympic Games in Rio, the Brazilian government decided to crack down on the favelas, making sure that the image of the city wasn’t tarnished. Several of the more notorious crime bosses were rounded up and tossed into jail. Among them is Jaca (Kabengele) who is released just after the closing ceremonies of the Games. He receives a hero’s welcome in the favela for as the boss there he took care of the residents and was their arbiter and go-to guy when they needed help, since nobody else gave a toss about them.

Jaca, however, doesn’t want to resume his old life. He knows that his reappearance has made the man who took over for him after he went to prison, Nelson (Loreto), somewhat nervous. He reassures Nelson that he, Jaca, has no interest in resuming his former life and that Nelson will remain in charge. Nelson, though, isn’t buying it.

What Jaca really wants to do is open up a pizzeria, something that Nelson finds amusing. However, Jaca’s former partner (and brother) Dudu (Logan) isn’t laughing. Dudu is eager to have the position of power and prestige he enjoyed when he was Jaca’s good right hand. Jaca’s wife Andrea (Nascimento) has become a drug addict and sells stuff to get buy, although now that Jaca is out, nobody wants to sell to her anymore for fear of being in Jaca’s crosshairs.

Then there’s Tati (Gil), his 13-year-old daughter who longs to emerge from the shadow of her parents and spread her own wings. However, the cops don’t believe that Jaca has gone straight, neither does Nelson and things are going to blow as soon as the pacification project is discontinued – which will be soon.

=Winters gives us some rich characterizations; most of the main cast are well-drawn and come off as three-dimensional people rather than one-dimensional clichés. Kabengele has a quiet intensity that makes him perfect for the role of Jaca, while Gil expresses a wisdom beyond her years, born of a harsh life in the favela. As for Nascimento, she just might be the most beautiful woman on Earth right now; but she is also an exceptional actress, giving what could have been an unsympathetic role a kind of dignity and pathos.

The camera is always moving in the film, sometimes to the point of vertigo-inducing. Strangely, the pace of the film doesn’t match the kinetic movement of the camera, giving the movie a kind of dichotomy of speed. It is a little bit off-putting.

Still, this is a solid tale of life in the favelas blending a kind of 1930s Warner Brothers gangster aesthetic with gritty modern urbanism. It’s a heady combination that, with a little judicious editing, might have been one of the cinematic highlights of the year.

REASONS TO SEE: Kinetic camera work.
REASONS TO AVOID: Slow-paced despite the above.
FAMILY VALUES: There is profanity as well as some violence and sexual content.
TRIVIAL PURSUIT: Winters is an American director working for the first time in Brazil with a Brazilian cast and crew.
CRITICAL MASS: As of 3/19/20: Rotten Tomatoes: 60% positive reviews: Metacritic: No score yet
COMPARISON SHOPPING: City of God
FINAL RATING: 6.5/10
NEXT: The Dog Doc