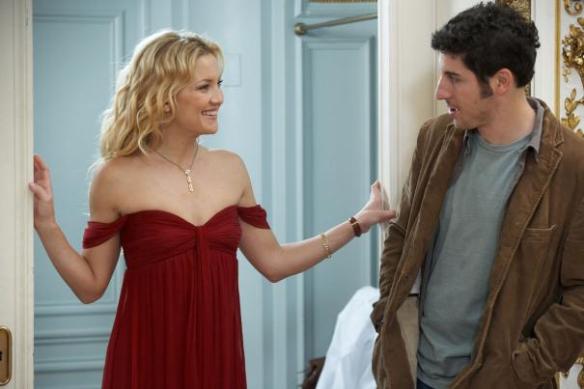 A case of beauty and the beast.

From time to time when a romantic relationship is ended by one of the parties involved, it isn’t because of infidelity or abuse; it’s because the person ending the relationship thinks he or she can do better. When we are the ones being dumped, we fervently hope that they find out quickly how good they really had it.

Of course, it wouldn’t hurt if you had someone help that particular education process along. Enter Tank Turner (Cook), customer service drone by day and relationship rescuer by night. He is hired by various guys who have been given their walking papers to date their exes and show them as bad a time as humanly possible so that they will run screaming out the door – and hopefully, back into the arms of the guys they just dumped.

Tank is exceedingly good at what he does – the date from hell thing, anyway or what his roommate calls “emotional terrorism.” He even has a list of ten obnoxious things he does to more effectively drive home the message that there are far worse guys out there than the loser she just left (and they are obviously losers, otherwise they wouldn’t have to pay someone to be worse than they are). Like anyone who knows how to drive a woman away, he also knows what is irresistible to them and so Tank does okay in the seduction department.

Tank’s roommate is his childhood friend Dustin (Biggs) who’s been going out with Alexis (Hudson) for a very long time. He REALLY wants to be with her forever, but for whatever reason she won’t commit to him. When she decides that she wants to end the relationship and explore other options, Dustin decides to utilize Tank’s service.

This wouldn’t be a romantic comedy if Tank didn’t wind up falling in love with Alexis, as she does with him. This really pisses off Dustin as you might imagine, who tosses Tank out on his ass, leaving Tank to commiserate with his father (Baldwin), a college professor who shows that the apple didn’t fall very far from the tree when it comes to his attitudes towards women.

I could go on about what happens next but you get the picture. It doesn’t take a genius to figure out where this is leading and it takes either a high developed sense of curiosity or a particularly well-developed sense of self-loathing to care.

I don’t mind raunchiness, even for its own sake – it works well in movies like The Hangover and Hot Tub Time Machine. There needs to be either a commitment to just keep pushing the envelope, or some sort of semblance of charm to make it work, however; just recycling dick jokes, urination and vomit gags or judicious use of profanity aren’t enough to carry a movie.

Kate Hudson is a charming actress who not only resembles her mother but is actually tackling roles that her mom excelled at some 25 years ago; it seems criminal to me that she hasn’t really gotten the kind of part that would elevate her career, but quite frankly in the stampede to write the next Judd Apatow comedy I think there aren’t a lot of good roles for women being written and those that are get offered to a select group of actresses first.

There are a lot of online critics who regard Dane Cook with the same wary suspicion that one might regard a pit bull dripping foam from his jaws, but I’m not one of them. I like his standup routines and although I’m willing to admit his film career has been wildly uneven thus far, I’ve actually enjoyed his work in Dan in Real Life and Waiting. This won’t go down in history as one of his shining moments, but he does the best he can with a part that’s really unplayable.

This is the kind of movie that makes me gnash my teeth, not because it’s so bad but because it’s just good enough to tantalize me with the thought that it could have been better. It’s got a decent premise, a solid cast and a veteran director; what it doesn’t have is enough to fill in the gaps and keep the audience entertained the way the aforementioned movies did. There’s enough that I liked about My Best Friend’s Girl that I can recommend it to those who think Dane Cook RAWKS and to those who like raunchy sex comedies; to those who don’t like either you might want to think twice before renting this.

WHY RENT THIS: Hudson and Biggs aren’t bad actors and Alec Baldwin can make even a bad role seem better.

WHY RENT SOMETHING ELSE: Decidedly un-funny and inescapably misogynistic, this movie is funnier in concept than it is in execution.

FAMILY VALUES: The raunch factor is fairly high with plenty of foul language, sexual suggestiveness and some nudity. Definitely not for the after-church crowd!

TRIVIAL PURSUIT: In the scene where Cook grabs and squeezes Hudson’s behind, a stunt tush was used.

NOTABLE DVD EXTRAS: There are a whole lot of features ranging from Professor Turner’s system of rating girls to one on the usage of Boston as a location. If you are interested enough in the movie, you may find some of them notable.