Crotchety old Jacques (Cox) owns just such an establishment in the center of New York City. Slovenly, suspicious, mean-spirited and set in his ways, Jacques limits his customers to 13 regulars and frowns on outsiders whom he contemptuously refers to as “walk-ins,” chasing them out with a bottle of vodka with a stream of ketchup in it in response for a request for a Bloody Mary with organic tomato sauce.

After his fifth heart attack, he finds himself sharing a room with homeless young Lucas (Dano) who is as kindly as Jacques is curmudgeonly. Jacques having a brush with mortality knows that his body will not sustain his lifestyle for much longer, and has begun giving thoughts to his legacy. He realizes that one thing he wants to remain after he shuffles off this mortal coil is his bar and determines to take in Lucas, who has nowhere else to go, as the heir apparent to his grandly named but less impressive on the inside House of Oysters.

Lucas, who was in the hospital after attempting suicide, is amiable enough to the idea although much of Jacques’ worldview is puzzling to him. “Never be nice,” he growls after Lucas treats one of the regulars with kindness. The world according to Jacques is a harsh place full of people who will take advantage of every fracture of weakness that your facade displays and to Jacques kindness equals weakness.

Lucas for his part is learning the niceties of bartending as well. “A good bartender always knows what his customer wants before he even knows it,” says the old school Jacques and Lucas very much takes this to heart. For his part, Lucas teaches Jacques that the way to make it through life isn’t necessarily through uncompromising adherence to one’s principles.

Into this mix one rainy night comes April (Le Besco), a stewardess afraid of flying. This is an egregious violation of Jacques’  longstanding “no women allowed” rule for the bar. This is enough to get his erstwhile protégé banished from the bar along with April, a fellow lost soul Lucas has fallen in love with. But what will become of Jacques’ legacy?

Icelandic director Kari, best known for his indie film Noi the Albino is shooting for a grimy look. The movie looks like it was filmed through a lens that hadn’t been cleaned in years. This is meant (I think) to be more of an allegory or a fable than something realistic and true to life despite the gritty feel. For one thing, I can’t imagine any hospital letting a kid who’d just attempted suicide just walk out of a hospital without at least some sort of plan for him to stay in a safe environment, not in a dingy old bar with an old man who just might be psychotic.

Cox is one of those character actors who almost never turns in a bad performance even when handed a turkey of a script. This one has quite a few flaws in it and inhabits the bar with eccentrics right out of the Lovable Movie Drunks for Dummies book. Cox interacts with all of them as if they were written by Shakespeare.

I tend to blow hot and cold with Dano. He has turned in some fantastic performances but also a few groaners as well. Here he is on the good side; his character has clearly been wounded deeply by some unnamed trauma in the past and while he doles out random (and sometimes not-so-random) acts of kindness, he sees himself as unworthy of life. Some of the kindest people I’ve ever known are the hardest on themselves.

There aren’t really any big laughs here and that might well be by design. One of the faults I have with this movie is I don’t think they are set on whether this needs to be a comedy or a drama and so tries for something in between. Not that combining the two can’t be done well, but I think the movie would have been better-served at picking a path and sticking with it.

I can recommend just about any movie with Brian Cox in it and a lot of them with Pau Dano in them. This one I think has just enough depth to it to be worth a look-see for those who haven’t caught it yet but I wouldn’t recommend putting too much effort into it; there isn’t enough here to make it worth digging to find.

WHY RENT THIS: Good performances from Cox and Dano. Gritty where it needs to be.

WHY RENT SOMETHING ELSE: Ceaselessly drab. Quirky more than funny.

FAMILY VALUES: A fair amount of cursing and a disturbing image.

TRIVIAL PURSUIT: Kari, born in Paris to Icelandic parents who moved him back to their home country at the age of three, is also a member of the band Slowblow.

NOTABLE DVD EXTRAS: As with most Magnolia home releases, there is an HD-Net making-of special. 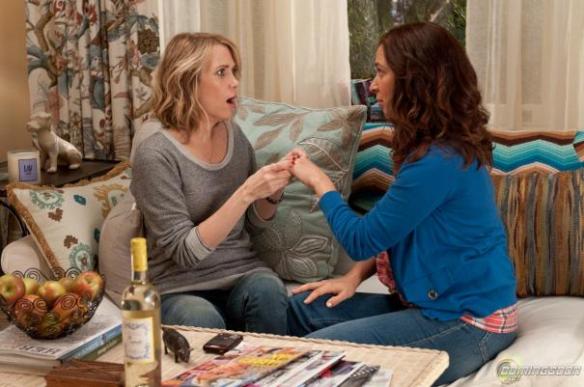 For losing the bet, Wiig has to give Rudolph a manicure with her teeth.

There’s something in the female hormone that just goes ballistic when it comes to weddings. Smart, capable, logical women turn into absolute emotional maniacs when confronted with the nuptials of a friend. Gather together an entire bridal party and you have enough cattiness and one-upsmanship to fill up thirty seasons of “Project: Runway.”

Annie (Wiig) and Lillian (Rudolph) have been the best of friends since childhood. Annie’s going through a bit of a rough patch at the moment. Her bakery, co-owned with her then-boyfriend has gone belly-up and her ex walked out out on her, leaving Annie holding the bag. Deeply in debt, she works at a jewelry store owned by a friend of her mom and rooms with a pair of English siblings, Gil (Lucas) and Brynn (Wilson) who would make Ellen DeGeneres homicidal. Annie is the regular booty call of Ted (Hamm), an egotistical jerk who wants no part of Annie other than to get his rocks off and Annie is more or less accepting of this relationship.

Things are looking up for Lillian however. She is engaged to her sweetie Doug and she wants Annie to be her maid of honor. Annie is only too happy to do it, not realizing the expense and frustration that goes hand-in-hand with the job. The bridal party includes Megan (McCarthy), Doug’s big-boned sister who shoots from the hip and has a somewhat skewed view of life; Rita (McLendon-Covey), Lillian’s cousin who is married with three kids and is horny as all get out; Becca (Kemper) who’s a newlywed and blissfully in love and finally Helen (Byrne), the wife of Doug’s boss and one of those rich people who thinks the world not only should revolve around them but in fact does.

Of course, Annie tries to keep costs under control but that’s simply not possible with Helen around. Annie and Helen regard each other with wary distrust, each vying for Lillian’s affection and to be top dog in the pack. As Annie initiates disaster after disaster (a pre-dress fitting meal causes a very nasty case of food poisoning which leads to a scene that isn’t for the squeamish and a drunken incident on a plane to Vegas for the bachelorette party which results in Annie not only making a fool of herself but for the plane not to reach its destination) the strain grows in her relationship with Lillian. Not even reconnecting with her mom (Clayburgh) and connecting with a sympathetic Irish cop named Rhodes (O’Dowd) can help Annie in her downward spiral towards an inevitable rock bottom.

This was produced by Judd Apatow and early indications that this is going to be another big box office hit for him. Like most Apatow movies, there is a good deal of vulgarity and a tendency to not skimp on sex or cussing which is the kind of thing that some folks are going to shy away from.

There are some genuine laughs here, and Da Queen pointed out that any woman who’s ever been involved with a wedding – their own or someone else’s – is going to find a lot of common ground here from the bridal party back biting to the absolute disasters that befall any wedding.

This is Wiig’s first leading role and the SNL veteran shows that she has the ability to be a charming and sympathetic romantic comedy heroine. Not only is she sexy and beautiful, she’s got great comic timing and she gets the audience squarely behind her for the most part, even when she’s sabotaging her own best friend in a fit of self-pity.

McCarthy often steals the show here and could wind up being the Zach Galifianakis of this little posse. Plus-sized women get the shortest of shrifts from Hollywood and it would be a shame for someone this talented and this funny to not turn a performance like this into a stepping stone to bigger and better things.

Byrne plays the tightly wound Helen note-perfect and while I haven’t seen much of her in comedic roles (she’s best known for the cable hit “Damages”) she has a future in comedy as well as drama. O’Dowd has also been receiving raves for his role and could well wind up as a leading man somewhere down the road although he seems better suited to comedy than drama.

The movie overuses the awkward situation as laugh template, leaving me feeling uncomfortable more than anything else. However, thankfully, there’s enough genuine humor here and coupled with the genuine chemistry between Wiig and Rudolph (honed by years of working together on SNL) makes for a movie that hits the right notes most of the time. It’s good to see a movie that primarily focuses on the female point of view that can be enjoyed by both sexes equally – that’s a fairly rare bird in the Hollywood aviary.

REASONS TO GO: Enough laughs to keep things moving along. Good chemistry between Wiig and Rudolph.

REASONS TO STAY: Some of the bits go on too long. A few too many awkward moments masquerading as laughs.

FAMILY VALUES: A whole lot of bad language and tons of sex, not to mention a few disgusting images.

TRIVIAL PURSUIT: This was Jill Clayburgh’s final film before she passed away from leukemia last November.

HOME OR THEATER: No need for a big screen on this one.