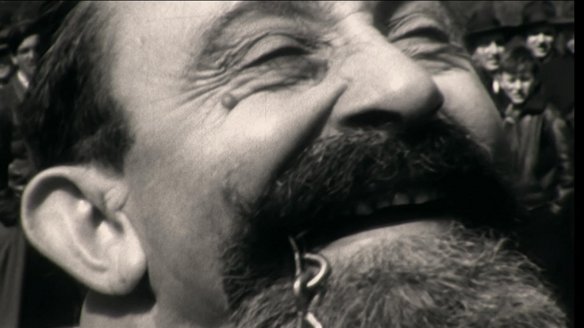 In this Internet age, we make heroes of people who do crazy stunts on skateboards, dirt bikes, mountain bikes, or simply taking dumb risks for 15 minutes of Internet glory. Back in the roaring 20s and Depression-era 30s, that particular function was fulfilled by vaudeville and the circus, where stunts of derring-do were routinely performed in theaters all over the world.

Feats of strength were certainly audience grabbers at the time but few could match the marvel that was Joseph Greenstein. Known by his nickname “The Mighty Atom,” he stood 5’4” tall and weighed 148 pounds soaking wet. He is as far from the traditional muscle men as it’s possible to get but he still performed amazing exhibitions that even today can’t be replicated easily. One of his feats was to bend a horseshoe; a modern strongman attempts to do so in a Florida lab but is unable to match what Greenstein did routinely into his 80s.

The movie centers around a 1967 radio interview that Greenstein did for WNBC in New York. The film adds interviews of his sons and grandson, fans and disciples in the muscle man (and women) community, experts on the nature of human bio-physiology and assorted spectators and interested parties. There are some diversions such as a story about a woman who seeing that the car her father was working on had slipped its jack and was crushing him lifted the 1.5 ton car off of him and pulled him to safety.

Greenstein’s success wasn’t brought on by muscle mass but rather by mental focus. As a young boy he contracted tuberculosis (which had already taken the life of his father) and he wasn’t expected to live more than a year. He got it into his head after seeing posters of strong men in a local shop that the strength these men possessed might be able to save him. He pleaded with a wrestler in a travelling circus to train him and the man took pity on him and invited him to join. Greenstein spent a few years on the road with the circus learning proper nutrition and how to focus mentally and use that focus to do amazing things.

He eventually returned home to Poland to marry and unable to find work immigrated to Galveston, Texas. There he started his own business – a gas station. Greenstein’s son Mike recalls the time when Harry Houdini, travelling through town, got a flat tire. Greenstein was summoned to change the tire and he did so without the use of tools or a jack. Astonished, Houdini’s manager brought Greenstein to New York to work on the vaudeville circuit and once he began to make some real money, he sent for his burgeoning family which now included six sons.

Besides his size, another unusual feature about Joseph was that he was Jewish and as his grandson wryly relates, there weren’t a lot of Jewish athletes at the time. Greenstein was proud of his heritage and was a devout member of his congregation for the rest of his life.

I will say the movie is entertaining although not vital; the archival footage verifying some of Greenstein’s legendary exploits which included preventing a plane from taking off using only his hair, biting through chains, bending nails, horseshoes and steel bars as well as hammering nails into plywood with his bare hands is absolutely riveting. In the footage Greenstein looks positively grandfatherly and somewhat of an academic which he was; he also marketed salves, lineaments and nutritional supplements that he created himself. He was also well-versed in the science of nutrition long before it became fashionable.

The overall tone is that Greenstein is proof that a human being can do anything he or she put their minds to, even the impossible. It kind of makes me want to go out and see for myself what I’m capable of, not a bad feeling to have after watching a film.

REASONS TO GO: A fascinating look at strength and how much of it is not physical at all.
REASONS TO STAY: Like many documentaries, there is an overuse of talking head footage.
FAMILY VALUES: This is completely suitable for general audiences.
TRIVIAL PURSUIT: The movie was directed by the grandson of the Mighty Atom.
BEYOND THE THEATERS: Amazon, Google Play, iTunes, Vimeo
CRITICAL MASS: As of 11/14/17: Rotten Tomatoes: No score yet. Metacritic: No score yet.
COMPARISON SHOPPING: Inside the Burly Q
FINAL RATING: 6/10
NEXT: The Beguiled (2017)