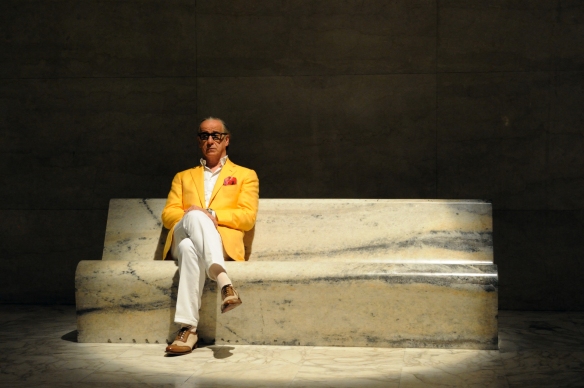 Toni Servillo looks suave and debonair even when taking a break.

There are those who remember the films of the great Italian director Federico Fellini with great fondness. Others look back at his films with annoyance. Fellini wasn’t one to inspire insipid emotions; you either loved his work or you couldn’t stand it. There was no middle ground with him. There hasn’t been a filmmaker like him since and although there have been a few films that could be classified as Fellini-esque, there were none that anyone could really say “this could have been made by Fellini” of. Until now.

Like the film considered to be Fellini’s masterpiece, La Dolce Vita, this film is set in the upper class of Roman society, the wealthy who go to parties that border on the surreal. Middle aged men dance with younger women. Older women dance with younger men. In Rome, the Eternal City, the one thing that isn’t eternal is youth. Those who are losing it hold onto it with their fingernails.

Jep Gambardella (Servillo) is celebrating his 65th birthday and has become aware that his time ahead is growing much less than his time behind. At 26, he had written a novel, The Human Apparatus that established his reputation – but hadn’t written a novel since. He contented himself by being the King of the Roman High Life – the man whose appearance at a party would instantly make it a success. He supports himself by interviewing artistic sorts for his editor, a kindly and wise little person with blue hair. Jep is beginning to suspect he’s wasted his life and determines to stop doing things he doesn’t want to do.

He gets involved in a relationship with an aging stripper named Ramona (Ferilli) that to his surprise is more friendship than sexual – he has over the years had plenty of sexual adventures, including one with the melancholy Orietta (Ferrari). Much of this self-reflection is brought on by the revelation that a former lover has passed away. She’d left him unexpectedly and without explanation some 40 years earlier and married another man. After her death, her husband had found her diary and discovered to his shock that it was Jep who was the love of her life and that she considered him, the man she spent her entire life with, a pleasant companion.

That’s really all there is to plot. In the interest of full disclosure, I have to say that I went into this movie expecting to hate it. I’d heard from friends and colleagues that the movie was at best a disappointment and at worst a pretentious mess. In fact, Da Queen did indeed wind up really loathing the movie but that wasn’t the experience that I had. Watching the movie, I was well aware of its faults – the movie is shamelessly pretentious in the sort of way that almost defiantly invites criticism. It is also way too long and the coda not worth the wait.

Still, I found the movie mesmerizing. In many ways, it’s a love letter to Rome itself – full of beauty that is unsurprising but with little hidden gems that only give access to those in the know. Sure the people depicted here are shallow with the delusion of being intellectual. Most of Jep’s circle is passing middle age into old age and they are going there kicking and screaming. They have all lived lives of hedonistic emptiness, going from party to gallery opening to art exhibition to dinner with little else in mind but to see and be seen.

The movie hits you with unexpected insights which caught me by surprise, much of which has to do with understanding how Romans view themselves and their place in the world. There is a world-weary melancholy to the movie which comes from being the heirs to an ancient empire that once stretched across the world but has changed and become secondary to superpowers like America and China. Jep’s self-awareness is critical to understanding the film; he is fully cognizant that he has lived an empty life and continues to live it. He knows that he has spent much of his time observing life rather than taking part in it. He has become insular, a man whose life revolves around the next party and whose reputation as a bon vivant is everything.

Near the end of the movie we are introduced to Santa (Merli), a 104-year-old nun who is while technically not a saint, referred to as such. She appears almost mummified, her jaw open wide in an expression you might find on the entombed but she has a gentle soul. In one of the movies best moments, a flock of migrating flamingos makes a stop on Jep’s portico following a dinner party he has thrown in her honor. Santa whispers with an expression of rapt joy that she knows the Christian names of each one of the birds. Then she blows a little puff of air and off fly the flamingos. Rome is ever a Catholic environment.

This is a movie of contradictions. Crazy pretentious but unexpectedly insightful. Beautifully photographed but with an eye to the ugliness of human nature. Artful yet crass. Serious yet with an absurd sense of humor. Spiritual but also hedonistic. Yes, I will admit that this is a movie that requires a good deal of effort to love. This isn’t a movie to be taken lightly nor is it as frivolous as it appears to be on the surface. It demands to be taken on its own terms and either you will or you won’t – that’s entirely up to you. If you do, however, you may well be rewarded with a glimpse inside the Roman soul that is rarely revealed to outsiders. In that sense, this is a masterpiece and there are those who agree plainly – it did beat out the incredible Danish movie The Hunt for the Best Foreign Film Oscar at the recent Academy Awards  Do I think it is a better movie than The Hunt? No, I can’t say that it is in all honesty but it is certainly a very, very good movie if you are willing to allow it to be.

REASONS TO GO: Moments of insight and thoughtfulness that sneak up on you. Gorgeous images and cinematography. If you love Fellini, this is for you.

FAMILY VALUES:  There is graphic nudity and a good deal of sexuality and sensuality. There’s also some drug content and a smattering of foul language.

NEXT: Our Film Library begins!

As you can see, film directors really do have a God complex.

The creative process is a tricky one. The moment you put pen to paper, image to film, something dies a little bit. It is not a pleasant process; it is violent sometimes, turning savagely on the artist.

Guido Contini (Day-Lewis) is one of the most acclaimed film directors in the world, certainly in the Italy of the mid-1960s. Referred to affectionately as “Maestro,” he has been on a bit of a cold streak of late, his last two movies having been as he put it “flops.” His latest, Italia, starring his regular leading lady Claudia Schaeffer (Kidman), is meant to put him back in the drivers’ seat. At least, his producer (Tognazzi) hopes so.

Guido, on the other hand, is falling apart both personally and professionally. He is suffering from an excruciating case of writer’s block and has been unable to write down a single word or idea about the movie with filming set to begin in only ten days. He is under enormous pressure from his producers, the studio and the press; after another banal press conference at his home base of Cinecitta Studios in Rome, he flees to a spa on the Italian coast.

There his personal shortcomings begin to catch up to him. Guido is a charming womanizer; he married Luisa (Cotillard), his first leading lady and is having an affair with Carla (Cruz), who is also married. He confesses his anxieties to his friend and therapist of a sort Lilli (Dench) the costume designer. All of them show up at the spa, throwing his marriage into disarray – where it was heading anyway. He is having flashbacks of his late mother (Loren) and Saraghina (Ferguson), a prostitute he had known in his youth. To make matters even more complicated, an American reporter (Hudson) with a passion for his style makes it clear she wouldn’t mind sharing his bed. What’s an artiste to do?

Director Marshall won an Oscar for Best Picture for Chicago and no doubt the producers were hoping that lightning would strike twice. After all, this was a Tony-winning musical based on the great Italian director Federico Fellini’s masterpiece 8 1/2. Unfortunately, this musical simply doesn’t measure up to Chicago. Whereas Chicago didn’t take itself terribly seriously in many ways, Nine certainly does, full of sequences that take place in Guido’s tortured mind that come off as self-indulgent. Perhaps that is as well, since Guido clearly is guilty of that particular sin.

My issue is that if you’re going to have a musical, the music should be memorable, no? Unfortunately, there are no songs here that are going to make you rush out and buy the soundtrack. The closest number that comes to it is ”Be Italian” as sung by Fergie – who knew that she would be one of the best features of this movie – and even that number is sabotaged by an egregious misuse of sand. Clearly the movie would have benefitted from an Andrew Lloyd Weber who, for all his detractions, definitely knows how to write a song that will stick with you.

When the musical numbers are the weakest part of your musical, you know you’re in trouble. The movie is saved by the depiction of Fellini’s Rome, taking you back to an era of Vespas, skinny ties, sophisticated women in cocktail dresses and cool Ray-Bans on the faces of suave men. Also, any opportunity to see Sophia Loren is worth taking. Ms. Loren is in her seventies now, but she still grabs your attention every time she’s onscreen. Modern movie goddesses like Kidman and Cruz simply can’t compete.

Because the musical numbers take place in the sexually-obsessive Guido’s mind, most of the women are clad in lingerie during them. Normally I don’t object to that kind of thing but you eventually come to a point of overload and quite frankly while I admire Judi Dench as the great actress she is and believe she is a beautiful woman, seeing her in a bustier trailing a feather boa the length of a Winnebago behind her was just disconcerting.

Even so, I enjoyed myself somewhat despite the many failings of the movie, which I guess is damning it with faint praise. If the music had been better, perhaps Marshall might have had something here but quite frankly, he was sunk before he even rolled cameras. I think Guido might have understood that completely.

REASONS TO GO: Recreates Fellini’s Rome very nicely. Sophia Loren is the epitome of Italian glamour and worth seeing alone. Day-Lewis does a credible job in a role he probably shouldn’t have taken.

REASONS TO STAY: The musical numbers are not terribly memorable, despite all the glitz and lingerie. Too over-the-top in places.

FAMILY VALUES: Lots of lingerie, incessant smoking and a lot of sexuality make this not a kid-friendly musical.

HOME OR THEATER: In order to more closely replicate the Broadway experience I recommend you see it on the big screen.