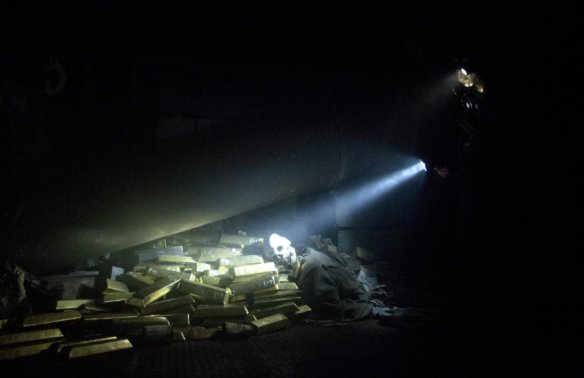 For ratcheting up the suspense, few venues rival that of a submarine. A handful of submariners, trapped in a metal tube below the sea where one tiny mistake, one critical bad break can quickly turn things into a bad day for those aboard.

Captain Robinson (Law) has been cashiered for the underwater salvage company he has worked for nearly 20 years, a victim of robotics. As it turns out, sending unmanned drone subs to the bottom is far less dangerous and far more practical – and economical – than sending humans to investigate wrecks. For his service, they give him a parting sum of 8,000 pounds. That’s just over $12,000 U.S. That isn’t a whole lot of gratitude.

Robinson has no family; they left him because he essentially was never home. His ex-wife Chrissy (Whittaker) and his son Martin (Barry) have lives much better than the one he could have provided them. He misses them both terribly.

So he does what any good red-blooded Scottish man would do; he finds the nearest pub and drags a couple of his fellow unemployed mates to drown their sorrows in a pint or six. And then, he hears something interesting from one of his fellow captains (Ryan): that shortly before being terminated, he located the wreck of a World War II Nazi U-Boat in the Black Sea in Georgian waters. That wreck is very likely the one that sank in 1940 carrying an enormous amount of Nazi gold that Hitler had been sending to Stalin to keep his then-ally in the fight. Because of certain geo-political realities, the salvage company hasn’t been given permission to bring the treasure up yet, but if it is what they think it is the prize is worth many millions of dollars.

So Robinson hits on the nutty scheme of salvaging the wreck himself with a crew of others. Daniels (McNairy), an accounting sort who was also let go from the salvage company, thinks that he can get financing from the mysterious Mr. Lewis (Menzies) so that they can rent and refit an old Soviet attack sub and go grab the treasure waiting on the bottom.

Aiding him are some of his mates as well as a few Russian submariners who know how to run the Russian sub; there’s also the son of a friend, Tobin (Schofield) who Robinson takes a fatherly interest in and the unstable Aussie diver Fraser (Mendelsohn) who is like a loaded gun in a crowded room but the best when it comes to salvage.

Taking the rickety boat down to the bottom is dangerous in and of itself but with the Russian fleet above due to the dubious legality of what they’re doing, things are a lot more dicey. What’s worse that as things start to get more real, some of the men begin to crack. They will have to work together just to make it back home, let alone get the gold which if they do find it, well, you can add greed to the equation that no matter how you write it means that not everyone is going to get out of this alive.

This is a reasonably taut and well-made thriller. Law makes for a pretty solid lead here, making Robinson a believable leader that would inspire most anyone to have confidence in him – when he’s not taking insane risks to get all the gold to the surface. Law has been making some interesting choices of late in the roles he’s been choosing, and this is a very good thing. He’s been challenging himself, playing a Cockney safe cracker, a manic Internet blogger, an ethically challenged doctor and an officious Russian military man along with this somewhat angry sub captain with a “Screw the Man” attitude and an access from deepest darkest Aberdeen.

Macdonald, who has directed such fine films as The Last King of Scotland shows he knows how to keep the tension nice and high. Once the sub sets sail, the movie really hits its stride although there are a few too many scenes of sailors sitting around and reminiscing about their lives. I don’t have a problem with character development which these sorts of scenes often provide but it needs to be more concise given the very tense atmosphere. Some of the information that you get about the background of the characters isn’t really germane to the plot and quite frankly, not all of it is all that interesting. We get that sailor A is lonely, or having financial difficulties, or loves the sea. We just don’t need to have a ten minute conversation about it.

There are a lot of twists and turns and while the plot twist isn’t necessarily innovative, it is nonetheless a big game changer and very welcome when it kicks in near the end of the movie. The script is well-written, giving very logical reasons to why certain things happen the way they do without having totally random events occur, or turn the captain into Superman. This is an example of a good sub thriller that is intelligent, well-written and still tense as all get out. This hasn’t gotten a whole lot of attention or support but it is certainly worth checking out. It’s no Das Boot – then again, what is? – but it is a satisfactory new entry into the genre.

REASONS TO GO: Some nice tension. Doesn’t always go the way you expect it will.
REASONS TO STAY: Should have trimmed about 20 minutes. Too many conversations about personal lives that add little value to the plot.
FAMILY VALUES: Lots of foul language, some fairly gruesome images and a bit of violence.
TRIVIAL PURSUIT: The sub used in the film is an authentic Soviet-era submarine which is normally moored in the river Medway in Kent.
CRITICAL MASS: As of 2/10/15: Rotten Tomatoes: 83% positive reviews. Metacritic: 62/100.
COMPARISON SHOPPING: U-571
FINAL RATING: 7.5/10
NEXT: Paddington