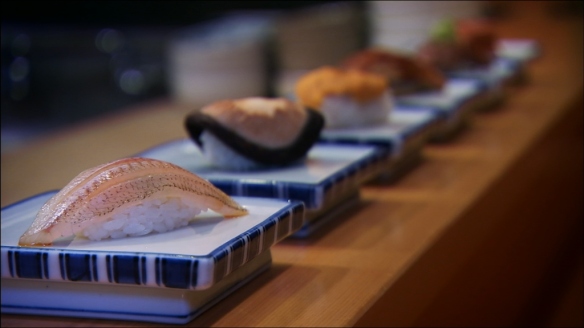 The tasty simplicity of sushi.

It really wasn’t that long ago that I couldn’t understand the appeal behind sushi. Raw fish? White rice? Yeccch. I resisted eating the stuff for a very long time. Then, at a party where that was all that was being served food-wise and I was desperately hungry, I finally broke down and tried it. I loved it. I became an instant sushi freak and have been for decades now.

Sushi started life as a cheap Japanese street food and has morphed into a multi-billion dollar industry. It has become one of the most popular dishes in the world, with places like China and Brazil beginning to discover it. It is insanely popular in Australia and even Europe has embraced the fish and rice delicacy.

In Japan, sushi chefs undergo rigorous training, a seven year process that requires two years alone to learn to cook the rice properly. High end knife stores in Japan supply the highly specialized sushi knives which are required to be razor sharp. Here in the United States sushi has popped up all over the country, even in the landlocked Midwest. The demand for sushi chefs continues to grow almost daily.

Demand for sushi has outstripped supply and entire species of fish are beginning to wobble dangerously towards extinction, primarily the bluefin tuna which is a highly prized species. While some limits have been enacted on fishing the species, the fact that a single bluefin can bring as much as $400,000 at market in Japan means that fishermen aren’t too choosy about following these laws.

This documentary tackles both sides of the subject, with a brief history of sushi and a look at how sushi restaurants operate in Japan, showing sushi chefs making an early morning visit to the world’s largest fish market in Tokyo; from there it moves on to the sustainability issue, how spiking demand for sushi has led to overfishing and overpricing of fish.

The first part of the movie can be a bit dry; the second half a little bit preachy. Both sides have a lot going for them, from the fascinating look at sushi preparation, and how it moved from street food to global phenomenon. This part of the film may indeed give you an appetite for sushi but the second half might well kill it. Hall isn’t able to integrate the two portions of the movie well, despite the smooth transition. Although both sections are interesting and important on their own, for some reason they are jarring when brought together. It’s like one half is saying “sushi has an honorable tradition” and the second half is “sushi has caused a great evil;” it’s sort of schizophrenic.

We do visit with the owners of Tataki, a San Francisco sushi restaurant that uses product from sustainable fisheries exclusively (which a number of other West Coast restaurants have begun to do). We also talk to scientists and oceanographers who warn that the ecosystem of the ocean has already been thrown out of kilter and reiterating grim statistics from other documentaries concerned with overfishing that  by 2048 the supply of seafood will be exhausted at current rates, a catastrophic eventuality that could lead to starvation as many cultures, particularly in Asia, rely on the sea as a main source of food.

The message of the film is not to stop eating sushi but to eat it responsibly. Make sure that your favorite purveyor of the dish gets their supply of fish from sustainable sources; if they don’t, urge them to do so. Of course, not all sushi restaurateurs know for certain if their sources are sustainable; if not, urge them to find out.

It is not too late to reverse the course of overfishing and responsible politicians and fishermen are already taking great steps to do so. Sushi lovers can also do their part by being aware of what they are eating and where it came from. While the movie here makes that important point, some may find that it uses a sledgehammer to make it when a gentle nudge would have done.

WHY RENT THIS: Draws attention to overfishing and the serious peril that bluefin tuna are in. Some nifty info about sushi chefs and restaurants.
WHY RENT SOMETHING ELSE: The two thrusts of the film don’t blend well together. A little bit preachy.
FAMILY MATTERS: Some fish blood and guts.
TRIVIAL PURSUITS: Following the release of the film, Chevron had the case tried in an American court, claiming fraud and corruption; raw footage from the film, not included in the final cut, was submitted as evidence in the case.
NOTABLE HOME VIDEO FEATURES: There is an image gallery included.
BOX OFFICE PERFORMANCE: $5,757 on an unknown production budget.
SITES TO SEE: Netflix (Streaming only; DVD rental coming soon), iTunes, Amazon
COMPARISON SHOPPING: The End of the Line
FINAL RATING: 6/10
NEXT: Vacation