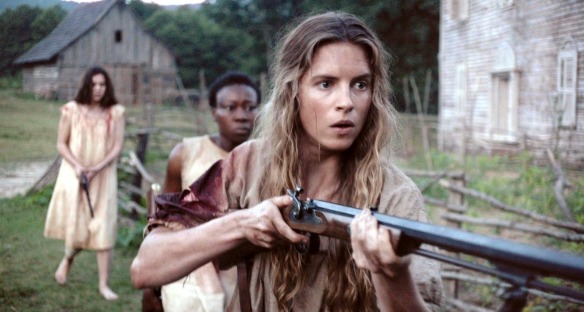 Augusta, get your gun!

When we think of war, we think of the men (and lately, women) on the battlefield, the ones actually shedding the blood and dying for their cause. We rarely think of those left behind to take care of things while their kinfolk are off to war.

As the Civil War was coming to an end and William Tecumseh Sherman was making his inexorable march to the sea, three women on a bucolic South Carolina farm were desperately trying to survive. Augusta (Marling), the eldest, is the most practical and the hardest working. She has come to realize that her daddy and her brothers are not coming back and that whatever they have to eat is what they grow and what they hunt, so she’s getting to business.

Louise (Steinfeld) is a teenager, spoiled by her place as the younger daughter of a wealthy plantation owner. She’s used to be coddled and cared for, her every little whim taken care of by someone else. She’s never worked a day in her life and still thinks that once the war is done and the Yankees vanquished, things will return to the way they were.

Mad (Otaru) is a slave that has become indispensable, strong and tough by years as a slave but compassionate for the girls that were once her mistresses. She, like Augusta, knows the war isn’t going well and hopes it will come to a swift conclusion so that her man Bill (Pinnock) will come home to her and help her tend this farm.

When Louise gets bitten by a raccoon, Augusta realizes that medicine will be needed or Louise might die. She stops at a neighboring plantation, only to discover horrors that she never could have imagined. She continues on into a nearby town which is mostly deserted except for a kindly bar owner (Dennehy) and a compassionate prostitute (Nuttall) – and two scouts for Sherman, Henry (Soller) and Moses (Worthington). Henry has lost any sense of decency; he’ll kill anything that moves and rape anyone who’s female and will drink anything that will banish such demons as men like this possess. Moses is looking for love in all the wrong places and by all the wrong means. The two had recently murdered a white woman they’d raped, a carriage driver and a passing slave. When Augusta gets away from them, they decide to track her and follow her back to the farm. What they don’t know is that the women don’t plan to give up without a fight.

Barber has a keen eye and an understanding of setting a mood; often his scenes are shrouded in midst or bright sunlight depending on the mood. He uses a lot of stunning images to get across more than any dialogue could tell; for example, early on he shows a flaming carriage pulled by terrified horses in the night. The spooked equines are galloping as fast as they can to escape the flames, not realizing they are pulling their own destruction with them. I don’t know if you could get a better metaphor than that.

Marling is becoming one of my favorite young actresses; she’s very poised in her roles (this one included) and seems to have a very good sense of which projects to choose as I haven’t really seen her in a movie that doesn’t showcase her talents well yet. She has the kind of self-possession that Robin Wright has always carried, which bodes well for Marling’s future.

Steinfeld who is no stranger to period pieces isn’t given as much to do, mainly acting the spoiled brat and then the frightened young girl. When backed against the wall Louise comes out swinging but for the most part she’s been used to depending on others all of her life and not on herself; the chances of Louise surviving the post-war South will depend very much on her ability to find an eligible husband.

Otaru is a real discovery. I hadn’t heard of her before, but she holds her own and then some against two very capable young actresses. She is mostly silent throughout the beginning of the movie but she has a couple of long speeches in the movie that really give you a sense of who Mad is and what drives her.

Barber also knows how to ratchet up the tension to high levels and the second portion of the movie is basically up to 11 on a scale of 1 to 10 in that regard. There are those who may say that there’s too much of a good thing in the tension department, but I would guess that Alfred Hitchcock might disagree; while this isn’t Hitchcockian in the strictest sense, I think the Master of Suspense would have approved of this. Some of the cliches of the genre however are very much in evidence, maybe a little too much so.

I found myself completely immersed in the film and committed to the story, which is exactly where you want your audience to be. While there are a few missteps – some stiff or awkward sequences by some of the actors, an overuse of an unconscious hero waking up just in the nick of time to save one of the others – by and large this is a beautifully crafted, intensely thrilling work of cinematic art. Definitely one to keep on your radar.