Dave Matthews – not the guy with the band.

One thing that nearly all of us have in common regardless of race, creed, nationality, religion, gender or any other defining statistic is the need to be loved. We all want it; to be in the company of someone whose emotional connection to us is as deep as ours to them. To live out our lives with the one person we feel safest with, who accepts us as we are and who makes our hearts beat just that much faster when they walk in the room.

Those with Asperger’s Syndrome are no different. Asperger’s is a mental disorder in the autism spectrum, although it is high-functioning; often you won’t know from talking to them that they have any disorders at all. Asperger’s affects the ability to read nonverbal communication and makes social interaction much more different and frustrating. So much of courtship has to do with non-verbal cues; an Asperger’s sufferer won’t be able to pick up on any of them.

David V. Matthews lives in Pittsburgh and has his own style which some may write off as quirky. He’s a gifted writer, an artist and a bit of a bon vivant in the sense that he can captivate a room with his personality. He was diagnosed with Asperger’s at the tender age of 41, which came as a bit of a relief – his mental tics and eccentricities now had an explanation beyond “that’s just something David does.” There was a reason for the way he behaved and the difficulties he had relating to others.

At the same time, it also meant – to his mind – that there was something broken with him, which can be a scary thing. Suffering from clinical depression myself, I know that feeling, alone in the dark when once you’ve discovered that you have this issue, you wonder “What else is broken in me too?” Asperger’s is not something you can take a pill and are then able to deal with social situations normally any more than someone with depression can take a pill and be happy.

David has tried a lot of different things to find love, including going to mixers that his support group throws, leaving quirky fliers around Pittsburgh essentially advertising himself as a romantic possibility for lonely ladies, to online dating through the service OKCupid. He is a handsome enough man although now pushing 50, most of the women available are single moms, divorcees or women who have either not had the time for a personal life or the inclination for one.

Sokolow divides the movie by holidays which is an interesting way of organizing the footage, but effective. She doesn’t pull punches here; watching David sometimes flounder in social situations makes you want to yell out advice to the screen. Then it hits you.

None of us are born with a manual that tells us how to attract the opposite sex. Mostly what we go through is a system of trial and error, emphasis on the latter. All of us, myself included, can recall painful episodes of wasted opportunities, catastrophic mistakes and missed chances when it comes to romance. We all have had painful experiences that have (hopefully) taught us for the next time around. We can all relate to what David is going through, but whereas those without Asperger’s can learn from their experiences, so too can David and others with Asperger’s but only in a limited sense; if they miss non-verbal cues the first time around, they’ll miss the same cues the second.

David, like many Asperger’s patients, has an atypical speech pattern; in David’s case, it is clipped and hyper-precise. This sometimes makes him sound condescending when I don’t think that’s really what his intention is at all. He also has a sense of humor that runs to the surreal and absurd; not everyone will connect with David as a person for these reasons. Some will find him to be overbearing but some will also find him to be the coolest person in the room and judging from what I saw over admittedly just over an hour of footage I would tend to characterize him as the latter. Of course, that’s all instinct on my end; your results may vary.

We can all see ourselves a little in David for the most part. Trying hard, sometimes too hard to connect with others only to be faced with disappointment and rejection time and time again, we pick ourselves up, dust ourselves off and launch ourselves back into the fray. Not all of us find the right one, at least not right away, but we keep on trying. You admire that about David; he knows that he is playing the game of love at a disadvantage but he perseveres. To use a sports metaphor, he’s the Muggsy Bogues (a 5’3″ point guard for the Charlotte Hornets who was the shortest player in NBA history) of romance.

The movie has a sweet ending that will put a grin on your face when you leave the theater which is priceless; it will also teach you something about Asperger’s and the everyday lives of those who live with it or have loved ones who do. Although the movie feels slow-paced at times, the short running time makes that a bit more tolerable than it might ordinarily. Still with all that, Aspie Seeks Love will get a favorable reaction from you solely depending on how you react to Matthews, and how you react to him says a lot more about you than it does about him.

Incidentally, you can connect further to Matthews at his blogsite where you can read excerpts from his forthcoming novel. You’ll be glad you did.

REASONS TO GO: Sweet ending. A real warts-and-all look at a real world issue. Educational about Asperger’s Syndrome for those unfamiliar with it.
REASONS TO STAY: Matthews’ personality may take some getting used to by some. Laid-back feel and pacing may not appeal to everybody.
FAMILY VALUES: Some adult themes..
TRIVIAL PURSUIT: Sokolow began as an indie rock performer with a critically acclaimed album Something About Violins to her credit; this is her first feature-length film after directing several shorts.
CRITICAL MASS: As of 4/15/15: Rotten Tomatoes: no score yet. Metacritic: no score yet.
COMPARISON SHOPPING: David and Lisa
FINAL RATING: 6.5/10
NEXT: The Keeping Room 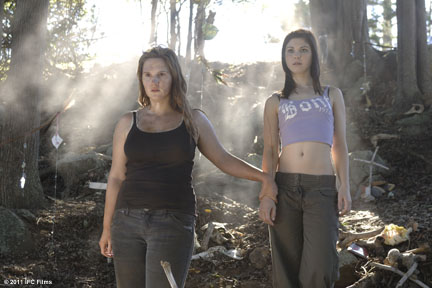 Very few of us are genuinely happy with who we are. Some of us long to change certain things about ourselves, be it our physical appearance or our own natures. Sometimes this self-loathing leads to a hatred for everyone who at least on the surface appears to have everything we want.

Rachel Barber (Bell) is one of those that looks to have everything anyone could want. Beautiful and graceful, training to become a ballet dancer who one day will dance for a world class company, happy and well-adjusted, she has parents (Pearce, Otto) who adore her and a handsome boyfriend named Manni (Chittenden) who is head over heels for her.

Caroline Reid (Bradley), who was once Rachel’s babysitter, is in the other class. She isn’t conventionally pretty, struggles with her weight, and has less of a bright future before her. Her parents’ divorce really affected her deeply and from that arose anger issues that have given her a hair-trigger temper, prone to rages that are truly terrifying. Her father (Neill) is wealthy and distant, tending to be more critical than loving although he does love her in his own way.

When Rachel fails to return home after dance practice, her parents are alarmed. This just isn’t like their daughter at all. The police seem disinterested in finding their girl; they chalk it up as a runaway situation, which mystifies Manni who tells her everything but didn’t tell her that she had any idea about running off. Even Caroline, surly at best, expresses concern. The Barbers, desperate to find their daughter, decide to search on their own with the police scarcely willing to help.

Tragically, the Barbers are searching in vain. Their dearest Rachel is already gone, brutally murdered at the hands of her trusted friend and former babysitter Caroline. The deed was done as part of a twisted, psychotic attempt of Caroline to transform herself into Rachel, the only way the girl thought she had of ever having the things she wanted.

The movie is told from three differing points of view; that of the Barbers, of Caroline and of Rachel herself. North, in an attempt I suppose to take some artistic license, jumps wildly between time frames which is often confusing. Still, North gets the benefit of some riveting performances.

Bradley, an Irish actress, was someone I hadn’t seen much of (if anything) prior to this film but she nails the role. You feel like you as a viewer are walking on eggshells every time Caroline is onscreen; she can be sweetness and light but can explode into a volcanic eruption of rage without warning or cause. Her self-loathing is palpable as is her need for her father’s acknowledgment, something she can never get – the way she wants, in any case. You never really understand the motives, but then you can’t really understand crazy unless you are a lunatic yourself.

Pearce and Otto are two of the most dependable actors working today and as the parents their grief and worry consume them, sometimes leading to conflict between their characters. They are both sympathetic but imperfect adding a touch of realism to the film. It isn’t always easy to watch them, but it never feels anything but genuine.

Speaking of realism and genuine, the murder scene is quite horrific and very tough to watch. It doesn’t pull any punches and there’s nothing about it that is clean or easy. I very much suggest that those who are easily upset by those sorts of things to think twice before viewing.

This is definitely a flawed film but it is still quite good nevertheless. North excels at keeping a sense of tension even when it is obvious what is about to occur or what has already occurred. For those of us in America who are mostly unfamiliar with the case (it was front page news in Oz so Aussie readers may be far more familiar with the events in the film than us Yanks) there is an element of suspense that is well-appreciated. Like the Barbers, North doesn’t always do the right thing here but she does her best and even if she makes mistakes they are at least honest ones. She has a good deal of talent and I look forward to seeing what the future has in store for her.

WHY RENT THIS: Extremely well-acted. Tense and suspenseful, even though it is pretty obvious even to those unfamiliar with the case how it’s going to end up.

WHY RENT SOMETHING ELSE: Time jumping confuses the viewer unnecessarily. Tries too hard in places.

FAMILY VALUES: The movie is intense in places and the murder scene might be too much for the sensitive. There’s also a few instances of foul language.

NOTABLE HOME VIDEO EXTRAS: There are some cast interviews that get highly emotional.