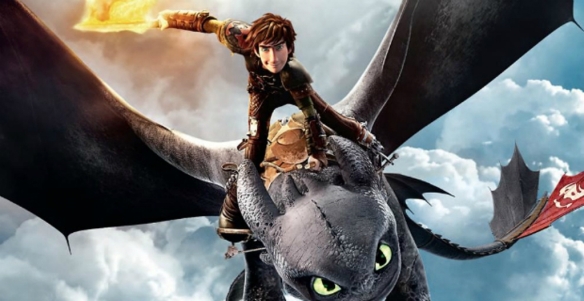 Hiccup and Toothless are flaming mad.

Becoming who we are is no easy proposition. It’s a search of discovery and the answers can be elusive, particularly when we’re not especially sure who we want to be.

The movie takes place five years after the first one. Hiccup (Baruchel) has been successful in integrating dragons into the daily life of Berk which has become a much happier place as Vikings and Dragons are living in harmony. Dragon riders show their stuff in highly contested dragon races (a kind of combination between Quidditch and Rollerball). While his father Stoick (Butler) is eager for his son to take over the family business and become chief, Hiccup spends much of his time making maps of the surrounding islands, expanding the world the Vikings have lived in into a much larger place. He is also continuing to invent things, in this case a flying suit so that he can soar with his best friend Toothless (Thom) as they explore.

Unfortunately, finding out what else is out there in that wider world can be a good and bad thing. For Hiccup, the good is in finding a Dragon Rider whose ice-riddled island hides many secrets including more dragons than anyone has ever seen in one place – and their human protector, Valka (Blanchett) who turns out to be Hiccup’s mother. This is something of a surprise since Hiccup had heard all his life that Valka had died protecting him from dragons when he was a baby but it turns out that Valka, who had always defended dragons to a Stoick who was deaf to her pleas had left in order to protect her family from the dragons – and vice versa.

On the bad side, Hiccup and his girlfriend Astrid (Ferrara) as well as their buddies Snotlout (Hill), Fishlegs (Mintz-Plasse), Tuffnut (Miller) and Ruffnut (Wiig) have also discovered a tracker named Erit (Harrington) who captures dragons for the villainous Drago (Hounsou) who wishes to create a powerful dragon army under the control of his gigantic Leviathan dragon who can control the dragons – and whom Drago controls through torture and violence. This is a challenge the likes of which Hiccup has never had to face and when a tragedy strikes Hiccup closer than he could have possibly imagined, he will have to find the strength to lead his people to overcome this threat – or else lose their dragons and their freedom forever.

In many ways, this isn’t a typical summer animated feature, although it appears to be the most likely to be the kidflick hit of the summer at first glance. The tone here is much darker with a main character being killed and the abuse of animals being a central theme. That may have made some parents wary to bring their kids to the multiplex for this one, which has underperformed at the box office although it seems likely to be profitable enough to warrant further sequels. I’m sure DreamWorks Animation executives were expecting windfall profits considering that there would be no animation competition this summer essentially other than from the sequel to Disney’s Planes which although a surprise hit didn’t look especially promising as a blockbuster.

Baruchel’s nasal, deadpan delivery is perfect for the character of Hiccup and while he isn’t nearly as awkward as he was in the first movie, continues to have a kind of gawky, outsider quality that is endearing. Butler endows Stoick with plenty of proud papa and – when he discovers that Valka is alive after all – tender love and caring. Craig Ferguson also returns as Gobber, mainly as comic relief.

While I thought the first film was really meant for smaller kids, this one isn’t so much. I get the sense that they wanted to grow up along with their core audience and while younger kids will still be delighted with the variety of dragons and their often goofy behavior as well as the cartoonish depiction of humans (this isn’t photorealistic CGI animation by any stretch), the kids who fell in love with the original will have matured some and the movie gives them credit for that and treats them accordingly. That’s a pretty refreshing point of view for a genre which often reads as a giant advertisement for toys and merchandise geared at kids.

I’m giving this a rating just a smidge under the first film because I think that parents may want to be wary about letting the more sensitive and immature young ‘uns in their brood see this – at least one little tyke at the screening we went to had a very adverse reaction to one of the darker scenes in the movie. I also thought the plot could have used a little more originality but essentially those who really like the first one will really like this one and those who didn’t care for the original will feel the same about the sequel. They’re essentially interchangeable in many ways but I will admit that I am much more intrigued to see How to Train Your Dragon 3 than I was to see this one.

REASONS TO STAY: The dragons are often too cartoonish. May be too dark for the impressionable.

FAMILY VALUES:  A bit of animated cartoon action and some rude (but not offensively so) humor. There is a moment in which a young man deals with an event that might be upsetting for really young kids.

TRIVIAL PURSUIT: DeBlois, who co-directed the original, accepted the sequel on the condition that he be allowed to direct a third film to make up a trilogy. The third film is already scheduled for June 17, 2016.

NEXT: Dawn of the Planet of the Apes