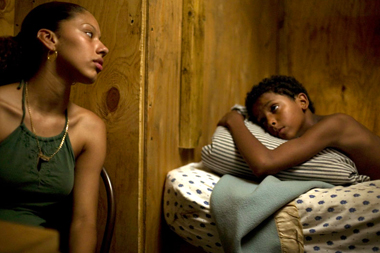 It’s a street like so many others around the world. Auto repair places cheek by jowl with illegal chop shops; pushcarts selling deep-fried goodies from native countries. Garbage lines the streets. There are no sidewalks and children play in the junk yards as if they were playgrounds. This could be a backwater third world country, but it’s not; it’s Willets Point in Queens.

Ale (Polanco), age 12, and Isa (Gonzales), age 16, live on their own on this very street. The owner of an auto body shop (Sowulski) has rented a room in the back to them with a couple of cots to sleep on. They are on their own and have nothing. She works in a food truck by day and sells her body to truckers by night.

He is a budding entrepreneur, selling stolen hubcaps to shop owners and M&Ms on the subway platform. He dreams of buying a lunch truck and fixing it up, selling hot meals to the many workers in the local shops. He is very much the man of the house; Isa is pragmatic but frail.

And that’s the plot. All of it. Oh, there are some further details but while none of them shake the room with thunder, they are best experienced just like life – as they come. Bahrani, whose debut Man Push Cart was a critical darling, excels at taking slices of life from places we generally don’t get to see and almost compels us to watch.

He is a worthy heir to Vittorio De Sica, the Italian auteur of The Bicycle Thief and Umberto D. I can’t really say for certain how realistic his portrayal of Willets Point is, but it feels that way. He used a lot of people in the neighborhood, disguising his production as a documentary so that the performances were more naturalistic although of course these hidden performances vary.

Both of the juvenile leads, however, acquit themselves magnificently, particularly Polanco. He plays a savvy little street hustler and apparently that’s a role very different than his own personality. There’s a toughness to him that sometimes breaks, revealing the very vulnerable boy beneath the veneer. The chemistry between him and Gonzales seems genuine (they attend the same school and Gonzales is close friends with Polanco’s sister). Gonzales has some tough scenes – there are no overt sex scenes but she has to play a young girl playing at being a woman; some of the scenes with Gonzales are very moving and she leaves an indelible impression.

Some of the other performances are less successful but it’s hard to tell who is acting and who’s being themselves. Ultimately it’s difficult to assess a lot of the roles because of that factor; let’s just say that I found some people convincing and some not so much. That’s only how they affected me however. Other opinions may vary – and have a bit more insight than mine.

This isn’t a movie for everyone. There are no happy endings (although the ending does have a grace not that leads to a feeling of hope overall) and no dramatic epiphanies. It ‘s just like life; things happens and life goes on. It’s not always pretty but it’s real and sometimes, that helps us navigate our way through our own Willets Points.

WHY RENT THIS: Devastating performances by Polanco and Gonzales. Has an air of realism that can’t be matched.

WHY RENT SOMETHING ELSE: Not all of the amateur actors come through. May be too intense for some.

FAMILY VALUES: There is some sexuality, adult themes, a little bit of violence and plenty of bad language.

TRIVIAL PURSUIT: The auto shop that Isa and Ale bunk in is actually owned by actor Rob Sowulski who plays the owner and the work that Ale does in it is real (he got paid by Sowulski for the work and by the producers for his acting). To prepare for the role, Polanco worked for Sowulski in the shop for six months before filming began.

NOTABLE DVD EXTRAS: Rehearsals for eight of the scenes in the film are shown.

BOX OFFICE PERFORMANCE: $221,227 on an unreported production budget; it’s possible that the film broke even although not likely.

NEXT: Hobo With a Shotgun

Elizabeth Banks and Brooklyn Decker do the Baby Belly Bump.

Childbirth is one of life’s miracles; where a new person is created from sperm and egg. Any mother will tell you that pregnancy is no picnic; there can be serious medical ramifications to the mother and while medical technology has improved, babies – and mothers – still die in the process. Giving birth then is a calculated risk.

On a “Dancing With the Stars”-like show, contestant Jules (Diaz), a Jillian Michaels-like trainer on a “Biggest Loser”-like show, captures the gold along with her dance partner Evan (Morrison). While the tabloids are speculating, the fact is that Alex is more than just a dance partner and it turns out that Jules is pregnant, which will force her to juggle her career as America’s favorite trainer with her pregnancy needs.

Watching the show where Jules triumphs is Rosie (Kendrick) and her roommates. Rosie works on a food truck that shows up in Atlanta parks and at events around town. Working for a rival truck is Marco (Crawford), an old high school classmate of hers. The two aren’t particularly friendly but they make a bet over whose specialty will sell more, they get to talking afterwards, one thing leads to another and she’s pregnant, without even having gone on a single date with him.

Also watching the show is Wendy (Banks), a children’s book author and an advocate for breast feeding. She and her husband Gary (Falcone) have been trying to get pregnant for months without any success. She desperately wants to experience all the things about pregnancy that she’s been writing about but hasn’t had the opportunity to feel for herself. So after a spontaneous tryst during an outdoor movie screening of Dirty Dancing, Wendy comes up pregnant. Gary can’t wait to share the news with his dad.

Her father in law is Ramsey (Quaid), a retired race car driver who is ultracompetitive as a father. He has remarried a trophy wife, Skyler (Decker) and makes no bones over his success as a driver and the money he has. Gary’s joy at announcing his wife’s delicate condition however is tempered when Skyler responds that she, too is pregnant and having twins – Gary is about to have siblings as well as a new child.

Finally, there’s Holly (Lopez), a photographer who loves kids but just can’t have any of her own. She and her husband Alex (Santoro) have decided to adopt an Ethiopian baby mainly because the wait times are shorter. Alex, however, is freaking out about the impending fatherhood thing so on the recommendation of Holly’s friend Kara (McLendon-Covey), Holly sends Alex to join the Dudes group, consisting of fellow dads Gabe (Huebel), Patel (Talai), Kara’s husband Craig (Lennon) and the leader Vic (Rock). To be honest, I’m not sure how helpful Alex found their advice but the camaraderie seems to be what he needs more.

Of course as the weeks and months go by and the due dates loom closer, there will be some issues. Some will find pregnancy nearly unbearable; others will breeze through it. Some will have issues with their partners, others with their own fitness as potential moms. One of them won’t make it to the delivery room. One may not make it out. All of them will find expecting not at all what they expected.

This is based on the best-selling pregnancy guide by Heidi Murkoff and Sharon Mazel, which has been described as the “Bible of American pregnancy” which is a term I find amusing, as if there is a difference between American and Canadian pregnancies. USA Today named it one of the top 25 most influential books of the past 25 years.

Not having read the book, I can’t say for certain whether the movie has captured the spirit of the book. I can only judge it on its effectiveness as a movie. First of all, there are too many plot threads. Now I’m not against showing different aspects of pregnancy – as they do here, but what wound up happening is that we wound up not getting enough time with the characters to develop a whole lot of attachment to them.

It also doesn’t leave the actors a whole lot of time to make much of an impression. Diaz’ character comes off as pretty abrasive, while Banks gets to be something of a caricature. Decker actually seems to make the most headway as a genuinely sweet girl who understands a whole lot more about what’s going on around her than she lets on.

There are some genuine moments of pathos – one in which one of the prospective fathers is terrified that he might lose his wife, and breaks down, unable to even accept the awkward comfort of a fellow dad – and the movie abruptly switches to a scene of Lopez and Santoro in Ethiopia preparing to adopt a baby. It kills the momentum of the film and takes me right out of the emotional power of it, and I was unable to reconnect afterwards.

Admittedly this is going to appeal more to moms and mothers-to-be than those of us who don’t have the correct plumbing. That’s not to say that there isn’t going to be anything to appeal to those of us without wombs; Rock gets to deliver some of his best work in quite a few years and the whole Dude Group thing seems to have been inserted there to give boyfriends and husbands dragged along something to hang onto, although more likely to give their girlfriends and wives something to snigger at.

It’s not that I object to the movie on general principles – pregnancy is a part of life and there has yet to really be a movie that truly captures the pain, the joy, the fear – all of the emotions that go with it. There were moments that this movie did, particularly in the Rosie-Marco story. Unfortunately, too much fluff and padding smothered what could have been a really good movie and turned it into a mediocre one.

REASONS TO GO: At times captures the difficulties of pregnancy.

REASONS TO STAY: Too many storylines. Relies too much on cheap laughs.

FAMILY VALUES: While yes this is more about pregnancy than sex, there is some content that is a bit on the crude side. There is also some bad language which you would expect from someone who is in labor.

TRIVIAL PURSUIT: Most of the extras who appear to be pregnant (both in Atlanta and Ethiopia) actually were at the time of filming.

FOOD TRUCK LOVERS: Several of the food trucks seen in the movie are actual working food trucks around the Atlanta area.