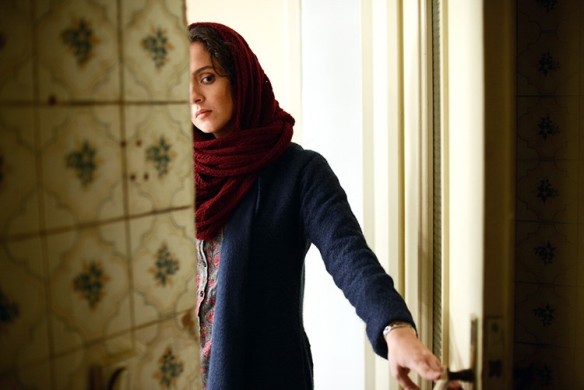 Taraneh Alidoosti peers into a room that no longer feels safe to her.

They say life imitates art, although it is more accurate to say that art imitates life far more often. On the rare occasion when the reverse is true it can be much more devastating than you might think.

Emad Etesami (S. Hosseini) is a teacher of Western literature in an Iranian high school (or its equivalent). Most of his students are practical jokers and a bit on the unruly side. His job is just that – a job. His passion is the stage and his drama club is producing Arthur Miller’s Death of a Salesman with Emad in the lead role of Willie Loman and Emad’s wife Rana (Alidoosti) as Linda Loman, Willie’s wife.

When their apartment complex becomes uninhabitable due to structure damage, Babak (Karimi), one of their cast members, offers an apartment in a complex that he owns. He’s a bit reticent to talk about the previous tenant, who left suddenly, other than to say “she had too many visitors.” What that cryptic remark meant soon became apparent when they discover that the woman in question had left some possessions she refused to pick up…and that she might have been entertaining men in the oldest profession sense of the word.

But that thought takes a bad turn when one night while Rana is alone and in the shower she buzzes in someone she assumes is her husband. Instead, it is someone who leaves her with a concussion and several bruises. Rana denies she was sexually assaulted but she is definitely reacting as if she was. She becomes paranoid, frightened. She becomes less able to leave the apartment even after she is cleared medically to do so. The relationship between Rana and Emad becomes strained. He becomes obsessed with finding out who committed the assault on his wife. He feels guilty for not having protected her. That obsession will lead to a confrontation that will test his basic decency and moral center. In other words, the Tennessee Miller play is being enacted in his life.

This is the most recent (as of this writing) winner for the Foreign Language Film Oscar and the second such award that Farhadi has won (the first was for A Separation). It’s fair to say that he is one of the best film directors in the world at the moment. Like some of his previous films, he takes an ordinary couple and throws something extraordinary into their lives.

It is never fully disclosed whether or not Rana suffered a sexual assault; whatever happened takes place off-screen and we’re left to wonder, as Emad does, whether or not she was raped. Certainly we are led in that direction through most of the film. Emad changes; he becomes obsessed, enraged and occasionally lashes out at Rana. Rana, for her part, becomes paranoid and withdrawn. While our sympathies lie with Emad about midway through the movie (Rana takes out a lot of her anger on him) we watch as our sympathies slowly change sides until Rana becomes the more rational of the two.

We see how bureaucrats in Iran regulate the arts, calling for slight changes in the Miller script that portray the West as decadent and corrupt. We also see how people are careful about expressing what they want to as there are always secret police around. It is the casual fear and paranoia that are part of the daily lives of Iranians that was the most poignant takeaway for me from this film.

Both Alidoosti and Hosseini are big stars in Iran. They are unlikely to ever cross over to American stardom; the current political climate forbids that. They give performances that while not necessarily Oscar-worthy are certainly worth including in that conversation. Alidoosti strikes me as the kind of actress who could easily be headlining major franchise films in a perfect world. This world is not perfect; it was never perfect and Arthur Miller knew that. The imperfect world is what crushed Willie Loman in the first place. Both Rana and Emad are setting themselves up to be crushed by that same world; whether they survive or not is immaterial. What does succeed is that not only do we see the cultural similarities between Iran and the West but we inadvertently become closer to the Iranian people by doing so.

REASONS TO GO: The performances of Alidoosti and Hosseini are strong. There’s some insight here into the repressive regime in Iran. The effect of the assault on all involved is realistically depicted.
REASONS TO STAY: The film moves at something of a slow pace.
FAMILY VALUES: There’s a brief bloody image and adult thematic content.
TRIVIAL PURSUIT: Farhadi chose not to travel to Hollywood to participate in the 2017 Academy Awards due to the travel ban that was enacted by the United States against seven Muslim nations including Iran. When the film won, Anousheh Ansari read a statement by the director explaining his absence.
CRITICAL MASS: As of 3/27/17: Rotten Tomatoes: 97% positive reviews. Metacritic: 85/100.
COMPARISON SHOPPING: Irreversible
FINAL RATING: 8.5/10
NEXT: Wilson