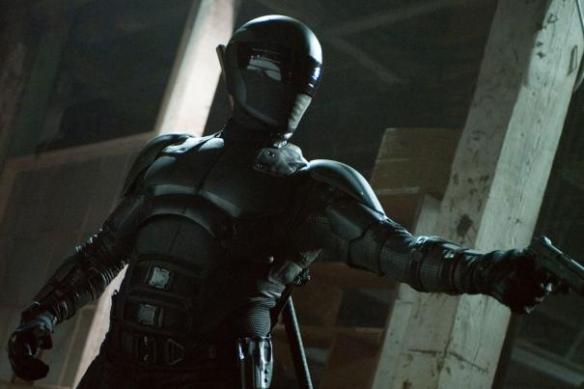 OK, Snake Eyes looks really cool, I’ll give you that.

When you make a movie about an action figure, the basic problem is that action figures are made of plastic and have no real personality. Movies that stick too close to the canon can sometimes run the risk of following suit.

The Joes – America’s elite fighting force, commanded by Duke (Tatum) and his sidekick Roadblock (Johnson) have infiltrated North Korea and are now heading for sunny Pakistan to secure their nuclear arsenal after their President was assassinated. Unfortunately, the person they should have been worrying about was our President (Pryce) who has been kidnapped and replaced by Zartan (Vosloo), one of Cobra Commander’s (Bracey) top henchmen. He has framed the Joes for the deed.

Now reduced to Roadblock, Lady Jaye (Palicki) and Flint (Cotrona), the remaining Joes soon become aware that Cobra Commander – who has been broken out of maximum security prison by rent-a-ninja Storm Shadow (Lee) and the half-crazy Firefly (Stevenson) who likes to use tiny little explosive firefly robots to do his dirty work. Now the United States is the de facto territory of Cobra and he has a nifty little weapon called Zeus – with all the firepower of a nuclear weapon and none of the fallout. Sort of like the “tastes great, less filling” of modern weapons of mass destruction.

They need to figure out a way to foil the nefarious plan of world domination. They’ll need all hands on deck to do it – including the enigmatic Snake Eyes (Park), trainee Jinx (Yung) and the guy who started it all, General Joe Colton (Willis), the original G.I. Joe.

The first movie in the series, G.I. Joe: Rise of Cobra was considered a misfire. Chu and the studio wanted to take the franchise in another decision – one not so much more gritty than more realistic. The performance-enhancing suits of the first movie are gone and while there are a few gadgets here and there, for the most part this is more stunt-oriented and battle oriented using weapons that are more or less familiar. Sure there are still comic book elements to the movie but then you don’t see an action movie for realistic behavior. There’s a superhuman element to the action hero that is just a teensy bit shy of spandex and a cape.

So is this version better than what they came up with for the first movie? Yes and no. Most of the cast from the first is gone with only Snake Eyes, Duke, Storm Shadow, Zartan and the President returning to the sequel. Adding Johnson is usually a big plus but for once his larger-than-life charisma is pretty much absent which is surprising and disappointing. I don’t know if he was just going through the motions on purpose but it sure seemed to me like he was. In either case this was one of the least successful performances of his career which is bad news since he’s expected to carry the film on his broad shoulders. In his defense, he isn’t given a whole lot to work with.

Also in his defense, the rest of the cast isn’t much better with the exception of Willis, who is nicely understated as Joe and Park, who is completely mute as Snake Eyes. Most of the rest is chest-thumping posturing with a loud rock soundtrack which really was already dated in the 80s when the heyday for chest-thumping action films was.

Even in that situation a movie like this can be saved with eye-popping special effects and/or jaw-dropping stunts. While the effects and stunts are more than adequate, they aren’t quite spectacular enough to overcome the film’s deficiencies.

REASONS TO GO: The Rock is charming as always. Some great martial arts scenes.

REASONS TO STAY: No character development AT ALL. Uninspiring.

FAMILY VALUES:  There’s all sorts of violence from martial arts one on ones to battle sequences to gun fights – and a bit of sensuality and mildly bad language too.

TRIVIAL PURSUIT: The movie was originally scheduled for release on June 29, 2012 but Paramount delayed the film for a year to what they claimed initially was to add 3D effects but later the real reason turned out that they wanted to add more scenes with Tatum in the film as he had become a big star in the meantime and getting him to do reshoots required a long wait.

NEXT: Your Sister’s Sister and the beginning of the 2013 Florida Film Festival!

Sienna Miller has a helicopter to catch.

For the major studios, it’s no longer enough merely to make a movie. There must be merchandise, stuff that will help the bottom line when all is said and done. This is particularly critical for an expensive, big-budget film that the studio is hoping to spin off into a lucrative franchise. It helps when the franchise and merchandise is already built-in.

In the near future, James McCullen (Eccleston), CEO of MARS Industries, an international weapons supplier, has created a brand-new weapon – a missile filled with micro-organisms called nanomites. These little critters consume anything made of metal, and they multiply at an astonishing rate. A single missile can potentially take out an entire city. He has sold four such warheads to NATO, which sends a team led by American warriors Duke (Tatum) and Ripcord (Wayans) to guard the shipment.

The NATO team is attacked by a well-trained, well-armed outfit led by the Baroness (Miller), who apparently once had a romantic relationship with Duke but the two had a falling out after her brother Rex (Gordon-Levitt) – a scientist attached to Duke’s unit – was killed after Duke had sworn to protect him. So here they are, together again in a way, with her soldiers pointing high-tech guns at Duke and Ripcord, the only survivors of the attack. They are rescued, however, by a third team armed with high-tech weapons of their own.

It turns out that this team is a secret military organization comprised of the best of the best, a multi-national force that exists to tackle jobs no one national military can handle. The team is commanded by General Hawk (Quaid) who had asked Duke to join the team four years earlier, but Duke turned it down – no doubt because he was in a funk after Rex’s untimely passing. Duke and Ripcord, impressed by what they have seen, want in but the other Joes, as they’re called, are skeptical. This is the most elite military fighting force on Earth, after all. However, during their training camp they are both so impressive that Hawk feels compelled to bring them aboard.

A good thing too, because the Baroness means to get those warheads for her employer. She and her employer’s personal ninja Shadowstorm (Lee) lead a team of specially enhanced soldiers – they’ve been injected with the nanomites, rendering them completely obedient, impervious to pain and utterly without fear – into the Joe’s Egyptian base, more casually known as The Pit. The raid is successful despite the best efforts of Joes Heavy Duty (Akinnuoye-Agbaje), Scarlett (Nichols), Breaker (Taghmaoui) and Snake Eyes (Park), a mute ninja who turns out to be Shadowstorm’s brother. The new recruits acquit themselves nicely as well. However, the warheads are taken and General Hawk is seriously injured. The Baroness’ team is greatly assisted by Zartan (Vosloo), a sociopathic master of disguise.

The Joes trace the Warheads to Paris, where the Baroness have taken them to her husband, a civilian nuclear physicist (Fitoussi). She forces him to weaponize the warheads and then callously has Shadowstorm kill him. She is definitely not getting a puppy for Christmas!

In any case, the Joes catch up to her and Shadowstorm and chase them through the streets of Paris, but despite their best efforts, they are unable to prevent the Baroness from firing one of the warheads at a national icon of France, which could spread throughout Paris like a terrible virus. The Joes keep this from happening, but they have to find the remaining three warheads and neutralize them before something horrible happens.

Sommers is a talented director, whose Mummy pictures rebooted Universal’s classic horror icon and made for some of the more entertaining movies of the past decade. He has a deft hand at action sequences and it is no surprise therefore that the action here is first-rate. There are also some nifty special effects (the destruction of the Eiffel Tower sequence is one of the most memorable of the entire summer). It’s a fun movie to watch.

The main issue I have with the movie is in the writing. I suspect that the writers felt that the target audience would be young, male and not too picky when it comes to plot, dialogue or characterization. The box office numbers may bear out that decision; certainly my 20-year-old son was enthusiastic about the movie, lamenting that only a P.S.A. at the end of the movie (the animated series was notorious for their weekly Public Service Announcements that were punctuated with the line “Knowing is half the battle” – the line is used here by General Hawk) would have made this a perfect cinematic experience.

As I often do, I must humbly disagree with my son. I think that this could have been a much better movie. The actors are given lines that I don’t think I could possibly say with a straight face, so I do give the acting crew credit. Their characters are pretty two-dimensional for the most part; the only intriguing one was Ray Park’s Snake Eyes, who was, appropriately, mute. Tatum was also disappointing. He seems to me to have a great deal of potential, but I have yet to see him live up to it. He seems more content with wooden performances a la Paul Walker, my least favorite action star. I do have to say that he isn’t given a lot to work with here.

Cliché after chest-beating cliché is spouted by the actors until I felt a need to turn some of those high-tech weapons on the cast. The studio didn’t screen the movie for critics, which is usually a sign that they don’t have a lot of confidence that the critics are going to write positive reviews for the movie and on that point the studio was pretty accurate. I will say that the movie is big dumb fun. Yes, it’s dumb and it could have been a whole lot better, which is frustrating to watch. However, there is enough fun to give it a mild recommendation, but given some of the competition in the theaters right now, it would be completely understandable if you spent your money on a different movie.

REASONS TO GO: Some terrific action sequences are enhanced by spectacular special effects. The futuristic weapons in the movie have a sky-high cool factor. There will be a good deal of nostalgia for those who loved the animated television series, even though the movie is ostensibly based on the comic book series more than the cartoon.

REASONS TO STAY: Absolutely ludicrous dialogue is rendered meaningless by a plot that a second-grader could have come up with. Channing Tatum gives a performance that makes Al Gore look positively charismatic.

FAMILY VALUES: Lots of cartoon violence – if you feel comfortable with your child watching the cartoon series, they should be okay seeing this as well.

TRIVIAL PURSUIT: Brendan Fraser makes a cameo as a training Sergeant who is, according to Fraser, a descendent of his character Rick O’Connell from The Mummy, also directed by Sommers.

HOME OR THEATER: I would recommend the big screen for the action and special effects, but keep in mind that this isn’t the best-written movie you’ll see this summer.