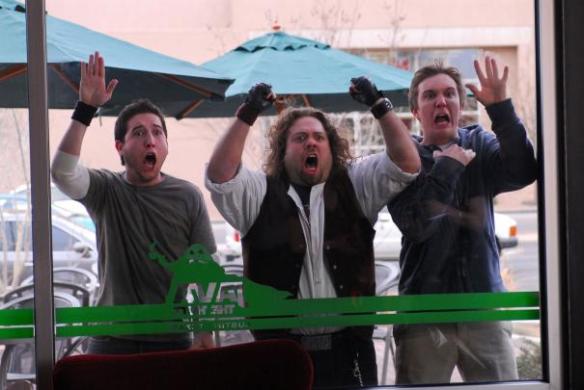 Fanboys on the outside looking in.

Fans have a kind of sweet madness. I’m not talking about the people who follow something on a casual basis; I mean the full-out, balls-to-the-wall, obsessive, dangerously knowledgeable super-fans; the kind that show up at conventions and name their kids after characters in the movies.

This specific fandom that Fanboys is examining is the Star Wars fans. The movie is set in 1998, just prior to the release of Star Wars Episode I: The Phantom Menace and arguably the best time to be a fan of the series – when anticipation had fans jumping out of their skins waiting for the new movie, the first in more than 15 years.

Four school friends who hadn’t been together since graduation meet up at a party; Eric (Huntington), the lone respectable one who was working for his dad’s car dealership which he was expected to take over some day; Hutch (Fogler) who lives in his mom’s “carriage house” (read: garage), Windows (Baruchel) a computer nerd who has a thing for a chat room geek he’s never met and Linus (Marquette), who is somewhat angry about the way things turned out.

It turns out he has plenty of reason to be angry; he has cancer and won’t live to see the next movie in the franchise released. Eric, who was once his best friend, resumes that role and decides that his friend WILL see the movie before anyone else does. The four of them – and Zoe (Bell), a very cool friend that frequents the comic book store Hutch and Windows work at and quite possibly the only girl that could hang with these guys – will drive from Ohio to Marin County, California where Skywalker Ranch is located, break in and watch the movie. Windows’ online crush even claims she can get them the plans to the Ranch which is legendary for its security.

They take off in Hutch’s tricked out van, a kind of rolling convention on wheels, and head vaguely West. On the way they will encounter evil Star Trek fans, the all-knowing Harry Knowles (of Ain’t It Cool News fame) and William Shatner himself as they race the clock to get their dying friend to the ranch. Will it be worth the trip?

Of course, we all know at this point in time that The Phantom Menace was a disappointment but back then the possibilities were endless. The world of fans was anticipating what they thought would be an epic movie and nearly every fan website was in a dither. It was a kinder world.

However, the story of this movie might have made a good movie of its own. The movie was completed back in 2007 but was shelved by studio head Harvey Weinstein who felt the cancer subplot was too grim for the comedy he wanted; he also felt it appealed to a niche audience and not a general one. Both are legitimate points.

Director Newman fought the changes and Weinstein eventually assigned director Steven Brill to reshoot some scenes and re-edit it. Fans went ballistic, launching a campaign to stop the changes, opening MySpace pages (“Stop Darth Weinstein”) and threatening to boycott Superhero Movie en masse. I’m not so sure that was a threat so much as a relief.

Eventually Weinstein relented and allowed Newman to re-cut the movie a third time…only he gave him only 36 hours to do the work. The movie bounced from release date to release date over the course of three years until it finally got an extremely limited release in February 2009 and, as you can see from the box office performance below, died like the Emperor at the end of Return of the Jedi.

It’s kind of a shame because the movie isn’t too bad. It got a critical shellacking which, frankly, illustrates why critics are out of touch with the audience that comes to the movies. People do get involved with their favorite franchises. Laugh and make fun if you want to, but it fulfills something in people, be it Trekkers, Star Wars fan or Twilighters. Those who judge the lifestyles of these people are the ones who really need to get a life.

For the most part, the performances here are okay although there’s nothing here that’s going to supercharge any careers. Baruchel is sweet as Windows and Marquette has some nice scenes as Linus. Mostly, the star power is in the cameos and there are plenty of those, from Star Wars vets Fisher and Williams to Shatner and Rogen (who is amusing as an overbearing Trek fan).

There are a lot of asides that will have knowing fans nodding in satisfaction; I can see how audiences not super-familiar with the Star Wars saga might feel left out a little. However, the movie really isn’t for them anyway. The DVD extras on several occasions call this a love letter to Star Wars but I don’t think it actually ends up that way. It’s more a love letter to the fans, and not just of Star Wars but of all things that excite the imagination and promote obsession. It’s sweet-natured and while not everything works, I am positive that the love is sincere. I’d much rather see a movie like this one than a thousand big budget big star comedies whose sole reason for being is to fatten the bank accounts of those involved. Sincerity trumps budget every time.

WHY RENT THIS: A very sweet homage to fandom, particularly that of Star Wars. Some of the cameos are actually well thought-out.

WHY RENT SOMETHING ELSE: A bit gratuitous in places and the humor – well heck the whole dang movie – is going to appeal to a very limited audience; some of the references will go right over the heads of ordinary folk.

FAMILY VALUES: There is a lot of crude humor, much of it sexual (as you might expect from a bunch of guys who don’t get laid much). There’s also some drug use in the movie, as well as a heaping helping of foul language.

TRIVIAL PURSUIT: The guards at Skywalker Ranch wear uniforms from THX-1138, one of Lucas’ early films (and one he references regularly in subsequent films). The head guard is played in a cameo appearance by Ray Park, who played Darth Maul in Star Wars Episode I: The Phantom Menace.

NOTABLE DVD EXTRAS: There is some webisodes that were available before the movie’s release, as well as a character study but really, most of the extras are relatively mundane as these things go.

BOX OFFICE PERFORMANCE: $960,828 on an unreported production budget; the film was undoubtedly a flop.