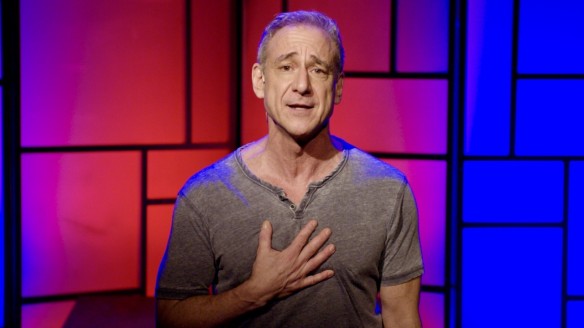 All the world’s an off-Broadway stage.

David Pevsner is a Los Angeles-based actor, comedian and singer who has loved musical comedies all his life. Now, some will stereotype him as a gay man for that – and he happens to be gay – but not all gay men know the lyrics to every song in Cabaret. I suspect Pevsner might.

This one-man show, filmed live, is essentially a confessional about his life which has been sordid at times – he for some time worked as a prostitute even as he was singing on Broadway – fun at times and unbearably lonely at other times, but he narrates the details with a keen sense of humor, and an occasionally bawdy tune, accompanied only by a pianist who harmonizes with him from time to time vocally.

This isn’t for those who are squeamish about gay men having sex, because Pevsner talks about it a lot; in fact even if you’re okay with it might have a “TMI” reaction to the monologues overall, but if you bear with it and check your hang-ups at the door (or more accurately, at the streaming site) you might learn something about human nature and maybe even a little bit about yourself.

=Filmed versions of a stage show live and die by how good the audience response is; Pevsner wasn’t blessed with a particularly vocal audience and at times some of the funniest lines are met with dead silence, which doesn’t help matters much. Pevsner is an engaging performer, self-effacing and without any sort of filter. Some of the songs work, some don’t; some of the jokes work, some don’t but there is no denying that this project comes from Pevsner’s heart.

From time to time Pevsner talks about things in life that are painful, some unbearably so – like the first real relationship he was in that despite the obvious love he had for his partner (and still does, if the show is any indication), the relationship became toxic and he had to give it up. I think we’ve all been through that kind of thing – loving someone deeply who was clearly no good for us and having to give it up to save ourselves from falling apart.

Yeah, I get that at times this comes off like a therapy session for a mature queen, but it takes all types to make a world. I’ve been fortunate enough to be friends with a wide range of gay men in my time (living for 20 years in the San Francisco Bay Area makes that almost inevitable) and while not all of them are like Pevsner, some are and the world is a better place with them in it as far as I’m concerned.

=So will you like this? Well, that depends on how open-minded you are about frank discussions of a gay man’s sexual history, and whether or not you like musical comedies your own self, because there’s a lot of singing and it is very much in the vein of modern musicals. I will confess I’m more of a classicist when it comes to musical theater, but there were things about A Chorus Line that I loved and the music is in many ways in that vein, so be forewarned – this is a bit of a niche video, but if you fit into that niche, you’ll find this entertaining and enlightening.

REASONS TO SEE: Funny and poignant in equal doses.
REASONS TO AVOID: At times feels like we’re listening in on a psychotherapy session.
FAMILY VALUES: There is a whole mess of profanity and sexual references.
TRIVIAL PURSUIT: The show was filmed at the Colony Theater in beautiful downtown Burbank, California.
BEYOND THE THEATERS: Amazon, AppleTV, Fandango Now, Google Play, Vudu, YouTube
CRITICAL MASS: As of 9/15/20: Rotten Tomatoes: No score yet, Metacritic: No score yet
COMPARISON SHOPPING: Wanda Sykes: Not Normal
FINAL RATING: 6/10
NEXT: Class Action Park