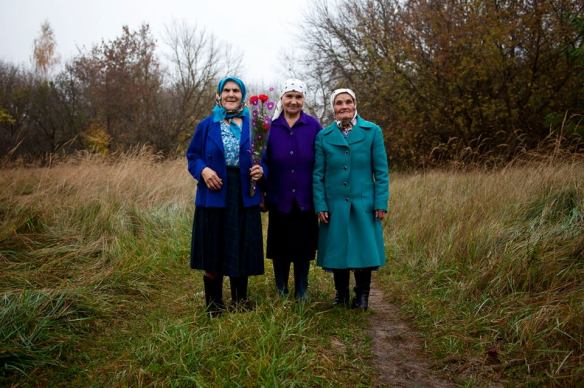 There are desirable places to live in the world – California, the Rhone Valley, Hawaii and so on – but there are some places in the world where I think people would choose not to live; the middle of the Gobi Desert, for example. Death Valley would be another. However, I think at the top of that dubious list would be the exclusion zone around Chernobyl.

When Reactor #4 exploded at the Chernobyl Nuclear Power Plant in the Ukraine on April 26, 1986 it created an area contaminated by radiation containing roughly 1,000 square miles. Those that lived in the rural villages in the surrounding area along with the plant workers whose homes were in the nearby town of Pripyat were forcibly evacuated, often just with the clothes on their backs.

For some, living away from where they’d lived all their lives was as awful a fate as dying of radiation poisoning. Some of the villagers therefore snuck back into the exclusion zone and resumed their lives. Most of them women and nearly all of them elderly, they continue to live in the zone which although not officially supported by the Ukraine is unofficially tolerated; as one aid worker says, they are far more likely to die of old age before the radiation kills them.

Now at this point I should mention that I’m half-Ukrainian on my mother’s side; one of the most important people in my life as a young boy was my maternal grandmother, whom I called Baba. She is someone I continue to regard fondly even now. These ladies – Hanna, Maria and Valentyna are the three focused on here – remind me very much of her, so do take this review with that in mind.

Bogart and Morris follow these ladies through their daily lives, through visits by government scientists researching the radiation in the soil, the water and in the ladies themselves through visits with one another, to receiving their government pensions – which in typical government fashion are late. I am startled to see how verdant the exclusion zone is; while the forests closest to the plant are barren, life seems to be thriving in the outlying area. The babushkas live on the food they grow and the livestock they raise, supplemented by what they can find in the forest which can include things like nuts, berries and mushrooms. They also occasionally go fishing in the local rivers.

They also get visits from other government officials, including one young woman who reluctantly accepts the offer of food and tries to eat as little as possible; she knows turning the ladies down outright would be insulting to them. They treat her with affection, like a granddaughter.

There are other survivors as well, some who continue to live outside of the exclusion zone, all of whom ruefully miss their old lives in their old village. It is pointed out that statistically, the babushkas living in the exclusion zone are outliving those of a similar age who are living outside of it, which only speaks to the powerful influence of living in comforting surroundings.

The stories that these ladies and the other interviewees are riveting; they have lived hard lives even before the accident. The privations of the Second World War and the German invasion, and even worse under Stalin’s policy of forced starvation are recalled with vivid detail. Many of them had husbands who weren’t exactly prizes; they talk ruefully of alcoholism and even beatings. This was part of life for a young Ukrainian wife back in the day.

We also get to meet a group of videogamers from Kiev who, inspired by the game S.T.A.L.K.E.R. which is set at Chernobyl, illegally trespass into the exclusion zone and try to penetrate as far as possible into the zone, making it all the way to Pripyat. They joke around, but what they are doing is unbelievably dangerous. Kids, don’t try that at home – or anywhere else.

It is the story of the explosion itself and the ensuing aftermath that really makes one pause; it is heartbreaking to hear about the chaos and the tears that occurred as their lives were irrevocably changed. The explosion was loud enough to wake most of them, and while they were far enough away from the plant that they didn’t see the actual disaster itself nor suffer the fatal effects of exposure, their tales are chilling enough.

The movie was filmed around Easter, a very big holiday in the Russian Orthodox Church, and we are allowed to tag along as the ladies are taken by bus to worship at midnight mass. This was one of the most moving moments in the film as you can plainly see that the women are affected by the ceremony which is in itself beautiful in the candlelight.

Clearly, the filmmakers have much affection for the babushkas and there is a wistful air to the whole film. These are old women used to hard work and self-sufficiency. Watching them go about their daily routines makes one realize that we have it easy here. While it is delightful to watch them on their cell phones – reception is as you might imagine rather dicey in the exclusion zone – they represent a way of life that is fast disappearing. That these are amazing ladies goes without question, but they are also in a sense very ordinary. I doubt they see themselves as particularly special; they are just doing what they’ve always done, despite the risks. It’s their very ordinariness that makes them special in my eyes; they are just like my Baba and of course, who doesn’t love their grandmother?

REASONS TO GO: Powerful images and scenes. Compelling subjects. Amazing stories about the explosion and aftermath.
REASONS TO STAY: May not appeal to all filmgoers.
FAMILY VALUES: Some thematic material may be a little intense.
TRIVIAL PURSUIT: The filmmakers were required to rotate in and out of the hot zone in order to minimize their exposure to the radiation.
CRITICAL MASS: As of 4/16/16: Rotten Tomatoes: No score yet. Metacritic: No score yet.
COMPARISON SHOPPING: The Russian Woodpecker
FINAL RATING: 8.5/10
NEXT: Norman Lear: Another Version of You 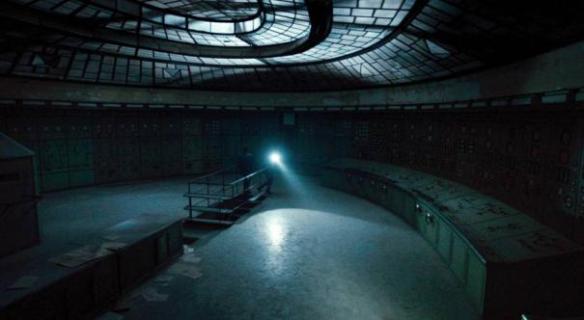 Out of the frying pan…

Some things are just downright bad ideas. Teasing the starving mother of bear cubs is one of them. Calling Mike Tyson a sissy is another. However, you’d pretty much have to put sightseeing at the sight of the worst nuclear accident in history right at the top of the list.

Chris (McCartney), his girlfriend Natalie (Dudley) and her good friend Amanda (Kelley) are touring Europe the way only young people can – like complete idiots. Relentlessly taping everything, acting like goofballs in front of the camera, they head into Kiev to visit Chris’ brother Paul (Sadowski) who has been estranged from his family for awhile. Paul shows them a good time, but the continuation of the tour to Moscow is interrupted when Paul meets an extreme tourism operator named Uri (Diatchenko) who proposes a trip to nearby Chernobyl.

Actually, the trip would be to Pripyat, the town near the plant where the plant workers and their families lived which became a deserted ghost town overnight when reactor #4 exploded on April 26, 1986, giving those who lived there no time to even collect their belongs. The town slumbered in radioactive peace for 25 years, the radiation too high to allow any sort of return until recently. The reactor itself is still highly contaminated and can only be approached in complete protective gear and even then only for a few hours at a time.

For Type A personality Paul, this sounds like his kind of adventure. Cautious Chris, who means to propose to Natalie in Moscow (can anyone say Lieutenant Deadmeat?) is reluctant to go but Paul convinces Amanda, who is a photographer, that she can get the shots of a lifetime in Pripyat so Amanda convinces Natalie at which point Chris caves.

At first it looks like the trip is over before it begins – the army has closed off the town and isn’t permitting Uri, who has conducted several tours there, into the town. However wily Uri knows a back way into town and drives the four Americans, along with Norwegian honeymooners Michael (Phillips) and Zoe (Berdal) into the deserted town.

Most of the vegetation is dead and they find a  mutated fish near a stream on the edge of town (had they stayed a little longer they might have seen a whole lot of ’em) but it’s the silence that’s eerie. No birds, few animal noises of any sort. There are feral dogs running around the area which can be dangerous if there’s a lot of them but nothing too dangerous (other than that big mofo bear that runs through one of the apartment buildings, scaring the bejeezus out of them). That is, until they return to their van and find out that the van won’t start – the leads on the starter have either melted or something is wrong with them – and neither Uri nor Michael can repair it. They call for help but nobody answers. It looks like they’ll have to spend the night in the van. And it soon becomes very apparent that they aren’t alone.

Oren Peli, who created the Paranormal Activity franchise, wrote and produced this (first time director Parker was behind the camera). There are several similar elements here; a microscopic budget (under a million, chump change for most Hollywood productions), unknown actors (unless you count pop star McCartney), a genuinely terrifying premise and shaky, hand-held cameras (at times the angles and shaky-cam perspective make this look kind of documentary-like). However, this isn’t nearly as scary as Peli’s previous film.

For one thing, none of the actors are really memorable, although McCartney bears a striking resemblance physically and also vocally to a young Leonardo di Caprio. Diatchenko also is strong and likable as Uri. The rest are mostly unremarkable but pretty competent.

I accept that for most horror movies to work, there has to be an instance of people doing dumb, stupid or irresponsible things and this film is no exception. I would not, for example, venture into the night from the safety of a closed and locked van armed only with a handgun to investigate strange noises when you are already aware that there’s a bear wandering around. You would definitely not do it if you had special forces survival training, which one of the characters supposedly had.

The monsters – you can pretty much figure out what they are – do not really act consistently which is another problem. In some instances they seem to be stalking the tourists with almost military precision. At other times they are mindless, shambling things out of a George A. Romero movie. We really only see them towards the end of the movie although we certainly know they’re there.

I liked parts of the movie and to be honest, with a little more care in the script, particularly in character development – if I can’t care about the characters, I have no emotional investment in their survival. In this case the audience become voyeurs at a Grand Guignol show and walk away merely feeling dirty instead of entertained, but thankfully there is sufficient entertainment value here. It could have used a lot more tension though – and a little less arguing.

FAMILY VALUES: There is plenty of violence, a surfeit of bad language and some pretty graphic and gruesome images.

TRIVIAL PURSUIT: Oren Peli got the idea for the movie after seeing a photo blog of a girl riding through Pripyat on a motorcycle.

ANTHONY BOURDAIN LOVERS: During a recent episode set in the Ukraine of his “No Reservations” travel program, chef/author Bourdain was taken to Pripyat and saw the amusement rides and vacant apartment buildings. There were no mutants caught on camera for the show however.