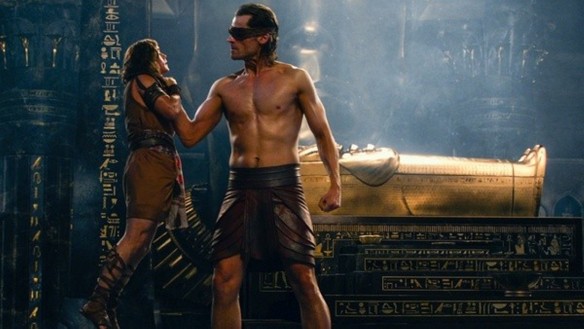 Power corrupts and absolute power corrupts absolutely. What power, dare I say, is more absolute than that of a god? And if that’s the case, does that not make gods the most corrupt of all creatures?

Ancient Egypt had it’s share of Gods and at one time, they not only walked among men but they ruled as well. Osiris (Brown) who rules the Valley of the Nile is getting ready to pass the crown on to his son, Horus (Koster-Waldau). Attending the festivities are Bek (Thwaites), a thief and a bit of a con artist and his girlfriend Zaya (Eaton), a beautiful young lady with an eye for beautiful things.

Also attending is Set (Butler), the brother of Osiris who rules the desert. Having a kingdom of scorpions and sand to rule hasn’t exactly put him in the best of moods and being a treacherous sort, he takes the opportunity to seize power from his brother, murdering him in the process. He also fights Horus and defeats him, plucking out his eyes in the process.

This sets up a despotic rule in which Set enslaves most of the population of Egypt to build obelisks, towers and temples – to Set including one tower that rises higher than any in tribute to Ra (Rush), the sun god more powerful than any other and the father to Set and the late Osiris. Oh, and did I mention that the gods bleed molten gold? Not so much an important plot point as an interesting factoid, that.

In any case, with the architect Urshu (Sewell) designing these monuments to human misery and enslaving Zaya as his personal assistant, Zaya convinces Bek that the only way to alleviate the suffering is to get Horus back in the game and she happens to know where his eyes – well, one of them anyway – is being kept. Bek being the master thief that he is retrieves it but at a terrible cost.

Now with an emotional stake in the game, Bek delivers the eye to Horus in a temple way out in the middle of the desert. At first Horus is none to keen on involving himself in the affairs of humans but he does have a strong streak of vengeance. With the aid of Hathor (Yung), the goddess of love who happens to be Horus’ lover and Thoth (Boseman), the arrogant god of intelligence, Horus and Bek must divine a way to defeat the evil Set and set things right in Egypt but Set has some allies and monsters to throw against the small band of rebels.

This CGI-laden effects fest is directed by Proyas, who has in the past done some memorable work (The Crow, Dark City). He has shown himself to have an imaginative visual sense and that comes out in spades here. What he didn’t have was an adequate budget or a satisfactory script.

The CGI here is for the most part lame and there is nothing that can kill a movie more easily than bad CGI. It mostly looks shoddy and unrealistic, from the elephants hauling stone to the building sites that look like they came from a videogame twenty years ago, to vistas of cities that look like they came from websites ten years ago. I don’t know if the sheer amount of computer images overwhelmed the effects houses that the filmmakers contracted, or if they gave them unrealistic deadlines – or if they simply contracted cheaper effects houses that didn’t have the capabilities to pull off the work (most likely explanation). Whatever the cause, I was constantly pulled out of the movie because the effects were noticeably bad.

The script also has a lot of lapses of logic and is riddled with cliches. If you’re going to do an epic like this, the least you can do is at least try not to cobble together a story that steals elements from other movies, including some that aren’t very good. At times, it seemed like the story existed to show off the visual effects – and we all know how those turned out. And what’s the deal with making the gods slightly taller than the humans (by two to three feet)? It’s distracting and unnecessary. Horus looks like Plastic Man upon occasion; all he needed was the goggles.

At least Butler and Koster-Waldau acquit themselves as well as can be expected; both are dynamic actors who can at least command the attention of the audience. Rush provides some needed gravitas, although quite frankly one gets the sense that he also found the script ridiculous and made an effort to get this over with as quickly as possible. I imagine he won’t be including his work here on any audition tapes.

I will give credit where credit is due; as much bashing of the visuals as I’ve done, some of the visuals have some imagination to them which I can only assume come from Proyas as he has a history of such things. Unfortunately, there’s not enough of that to overcome the fact that this movie looks bad and tells its story badly. Only the charisma of the antagonists really saves this movie from being completely unwatchable which hopefully will translate to better movies for the both of them. 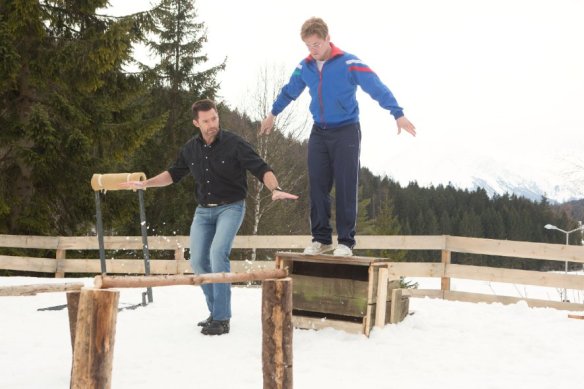 =Michael “Eddie” Edwards is a bit of a folk hero in England. From a young age he dreamed of being an Olympic champion. He never let the fact that he was a crappy athlete get in his way. Inspired to become a ski jumper (since there were essentially no ski jumpers in England), he has to claw and fight and scratch his way to the 1988 Calgary Winter Olympics where he will jump into the ages.

See the trailer and clips here.
For more on the movie this is the website.
Release Formats: Standard
Genre: Sports Biography
Now Playing: Wide Release
Rating: PG-13 (for some suggestive material, partial nudity and smoking)

(Summit) Gerard Butler, Nikolaj Coster-Waldau, Brenton Thwaites, Elodie Yung. When the gods make war amongst themselves, their human followers suffer. The great god Set has taken over Egypt, running it with an iron hand. Only the courageous hero Bek can save the day with the aid of the god Horus, but the two will have to overcome mighty odds.

See the trailer, clips, interviews and a promo here.
For more on the movie this is the website.
Release Formats: Standard, 3D, IMAX 3D
Genre: Fantasy
Now Playing: Wide Release
Rating: PG-13 (for sexual material, some language and smoking)

(Fox Star) Sonam Kapoor, Shabana Azmi, Ali Baldiwala, Alex Kozyrev. The 1986 hijacking of Pan-Am flight 73 in India by terrorists is one of those unforgettable stories that could have been a lot worse. The courage of flight attendant Neerja Bhanot is credited with saving lives aboard that flight; she is a national hero in India and her story is told for the first time on the big screen here.

(Sony Classics) Géza Röhrig, Levente Molnár, Urs Rechn, Todd Charmont. Near the end of the Second World War, an Auschwitz inmate charged with burying the bodies of the dead discovers a corpse that he takes to be his son. Not wanting his son’s body to be burned with the others, he must find a rabbi willing to deliver the funeral rites and help him give the body a proper burial. This is the odds-on favorite to win the Best Foreign Language Film Oscar at Sunday’s award ceremony.

See the trailer and clips here.
For more on the movie this is the website.
Release Formats: Standard
Genre: Drama
Now Playing: Regal Winter Park Village
Rating: R  (for disturbing violent content, and some graphic nudity)

(Open Road) Kate Winslet, Casey Affleck, Chiwetel Ejiofor, Woody Harrelson. A group of dirty cops are blackmailed into pulling off a nearly impossible heist. The only way they can make it work is to call in a code 999, officer down – which would involve killing a fellow police officer. But will they be able to pull it off – and what happens if they can’t?

See the trailer, clips, interviews and B-roll video here.
For more on the movie this is the website.
Release Formats: Standard
Genre: Action
Now Playing: Wide Release
Rating: R (for strong violence and language throughout, drug use and some nudity)