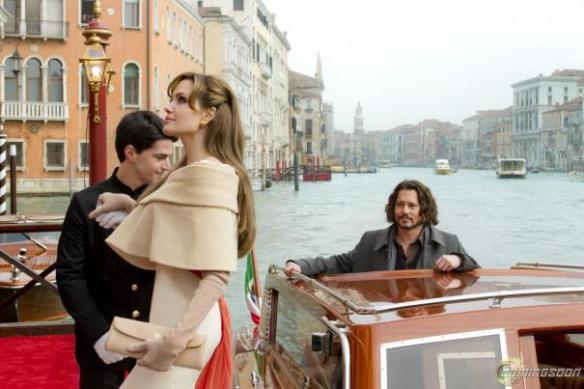 A beautiful mysterious woman on a train. A math teacher from a Podunk junior college in Wisconsin. All the ingredients for a wonderfully crafted thriller in the vein of Charade or any one of a number of Hitchcock movies, and in the hands of an Oscar-winning director could be the makings of a marvelous two hours at the movies.

A beautiful, sophisticated Parisian woman named Elise Clifton-Ward (Jolie) is being watched by the police, in particular a Scotland Yard police inspector by the name of John Acheson (Bettany) who seriously needs to consider a decaffeinated brand. She receives a note from Alexander Pearce, a brilliant larcenist on the run from not only Interpol and Scotland Yard but also from Reginald Shaw (Berkoff), a notorious British gangster who has a predilection of surrounding himself with Russian muscle. You see, Pearce stole more than two billion dollars from Shaw and that kind of thing tends not to sit well with gangsters. Elise is apparently the connection to Pearce that everyone is looking for.

The note tells her to get on the train to Venice and pick out someone with a similar height and build as Pearce and make the police believe that the man she is with is actually Pearce. It appears that the thief has used some of his ill-gotten loot to change his face and even his voice. Nobody knows what he looks like now, not even Elise.

She chooses a very unlikely sort; Frank Tupelo (Depp), the aforementioned Math teacher from the junior college in Wisconsin (making Jolie the mystery woman on the train). The two of them wind up flirting. He is surprised; things like this never happen to him. Still, they share a fine meal and then as the train pulls into the station, they go their separate ways. Frank is certain he’s seen the last of her.

But he hasn’t. As he fumbles with a map in St. Mark’s Square, she pulls up in a boat and offers him a lift. She takes him to a five star hotel, and checks him in as her husband. It is clear they are mutually attracted, but she loves someone else – and his heart has recently been broken. He sleeps on the couch, she sleeps in the bed.

In the meantime, both Interpol and the gangster are closing in on them. Frank has no idea what he’s in for but as thugs with guns come after him and the police sell him to the mobster, he only knows that the deadly game he’s playing he must win because the consequences of losing are fatal.

There are definitely elements to a variety of old-fashioned thrillers, not the least of which are Charade, The Man Who Knew Too Much and North by Northwest. Director von Donnersmarck previously directed the Best Foreign Film Oscar winner The Lives of Others knows his way around a thriller, and while this isn’t the most energetic ones in terms of suspense, it nonetheless keeps the audience on their toes.

Jolie is channeling Audrey Hepburn and Grace Kelly here simultaneously – not an easy feat I can tell you. Her Elise is cool, sophisticated and elegant – she even wears long formal gloves, not something most people wear these days. This is Jolie at her most attractive, and she uses her beauty as a deadly trap. She is the very embodiment of the femme fatale.

Depp can act the stammering, stumbling nincompoop when he chooses to; in fact, it’s part of his charm. I think the part might have been better served with a suave Cary Grant type – not that there are any around like that (maybe George Clooney comes close). Depp fulfills his role competently but there isn’t much chemistry between him and Jolie; a little more passion might have made the movie work better.

The supporting cast is solid, with Bettany as the obsessive cop, Dalton as his angry boss (what is it about superior police officers that they always have to have a bug up their asses?) and Berkoff as the baddie, a role he has more or less perfected.

This is a competent thriller that takes full advantage of its Venetian location, and the charm of Venice is where the charm of this movie lies. Von Donnersmarck has the makings of a great director, although The Tourist won’t go down as one of his signature films. It is, however, at least entertaining and if you’re into watching Angelina Jolie, she is at her best here. Actually, between her work in Changeling and this film, I might have to revise her position on my list of favorite actresses in a more upwards direction.

REASONS TO GO: You can’t get much better in the star power department than this. Magnificent Venetian vistas and the kind of upper crust lifestyles of the rich and shameless we all adore.

REASONS TO STAY: The plot twist at the end isn’t nearly as jaw-dropping as it should have been.

FAMILY VALUES: There is violence a’plenty and a good bit of strong language as well.

TRIVIAL PURSUIT: Jolie stated in an interview that the only reason she agreed to do the movie was because it would be a “quick shoot” in Venice.

HOME OR THEATER: The movie is on a grand scale that demands a big screen.

TOMORROW: How Do You Know