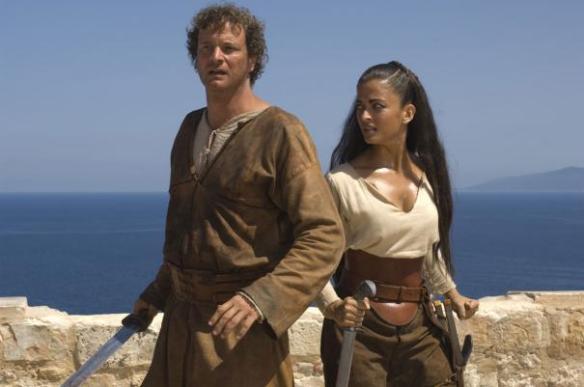 "This island of Capri - I can't imagine anyone else ever wanting to visit. Why are you looking at me that way?"

With the success of Gladiator and 300, it stands to reason that we’ll be seeing more sword-and-sandal epics coming our way. Stacked up against the two movies previously mentioned, The Last Legion doesn’t really belong in that kind of company. However, that doesn’t necessarily mean it should be relegated to the avoid-at-all-costs list.

Romulus (Sangster) is a young boy, the son of the last female descendent of Julius Caesar. His male relatives have ascended to the throne of Rome left and right and have been assassinated. Rome is beset from without by angry Goths, led by Odoacer (Mullan), who has been denied what he believed was his rightful due as defender of the Empire by Orestes (Glen), Romulus’ arrogant father and regent, and from within by greedy, weak-willed Romans.

Orestes gets one of his finest generals, Aurelius (Firth) to be the boy’s bodyguard. Aurelius is less than thrilled about the assignment, but has sworn an oath to defend the boy to his last breath – Aurelius, not the boy’s. Orestes also sends Romulus’ tutor Ambrosinus (Kingsley) packing for having the temerity to encourage the boy to think for himself. That’s simply not what emperors of the known world do.

On the night of his coronation, Rome is sacked by the Goths. Odoacer’s hyperactive second-in-command, Wulfila (McKidd) kills Romulus’ parents and captures the boy. He’s all for killing the last Caesar, but Ambrosinus shows up at the last moment and persuades Odoacer to keep the boy captive – on the isle of Capri. Tough gig.

Aurelius, with boyhood friend Nestor (Hannah) and Theodorus (Siddig), the ambassador of the Eastern Empire, plot to get the kid back. Only a few of Aurelius’ men survived the Goth attack, so Theodorus sends his best warrior to assist. The best warrior turns out to be a woman named Mira (Rai). Together, she and Aurelius rescue the boy and Ambrosinus only to discover that the boy has found ex caliburnus, the fabled sword of Julius Caesar. However, things have changed when they get back to Italy and it looks like Romulus is going to need an army just to survive in this hostile world. There is a legion that has not yet switched allegiance to Odoacer; the fabled Ninth, also known as the Dragon Legion. They, however, are all the way in Britannia, a long journey. Wulfila, having been maimed in the rescue of Romulus, is also hot on the chase and breathing fire of his own.

When you read the plot on paper, it sounds terribly cheesy and in many ways, it is. In all honesty, if you go in and try not to think about historical accuracy too much and accept this as a bit of a fantasy grounded in a few facts, it’s actually not a bad piece of entertainment. Much of the story will seem a bit familiar, and there are clichés up the yin yang but the story was entertaining enough to keep my interest, and the performances solid enough to not strain the bounds of credibility. Kingsley looks a bit like a hippie in his outfit here, but Firth makes a terrific Roman. Rai, one of the most beautiful women on Earth and one of the biggest stars in Bollywood, is pretty hot as a warrior and shows some skills with a sword. Director Lefler cut his teeth on the “Hercules” and “Xena” TV shows so he knows what he’s about in this genre.

In all honesty, I was surprised. Considering that the movie got almost zero publicity during its theatrical release and had its release date pushed back several times – usually the sign of a bad movie – it’s a pretty entertaining. Don’t kid yourself – The Last Legion didn’t make anybody’s top ten lists, but you won’t leave the couch feeling disappointed.

WHY RENT SOMETHING ELSE: Script riddled with clichés. Takes a few liberties with history. Cheap CGI.

FAMILY VALUES: There are some battle sequences and swordfights, but nothing gruesome. Overall, I’d say this is suitable for the entire family despite the PG-13 rating.