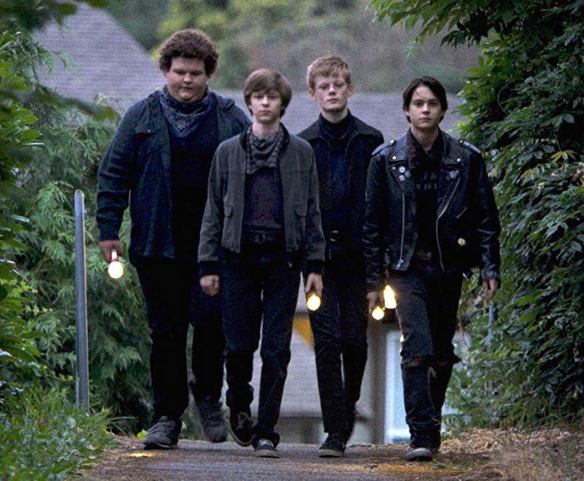 Just a bunch of teenage badasses.

We remember our childhood with a certain tinge of nostalgia. The era we grew up in – be it the 50s, 60s, 70s, 80s, 90s or aughts – live in our memories with a sepia glow of comfort and warmth. Summer nights spent bicycling around the neighborhood with our friends, looking for whatever adventures might be found in the nooks and crannies of where we grew up are precious to us as we grow older, careworn and further away from our youth when anything was possible, before we found out that life isn’t always beautiful.

Davey Armstrong (Verchere) grew up in the 80s in a small Midwestern town which was about as suburban as it got. His dad (Gray-Stanford) worked as a sound man for the local TV news. His best friends were always around the neighborhood and summer was an endless time of hanging out, talking about girls and neighborhood games of manhunt.

It is also a troubling time for his parents who are fully aware that several boys around town have gone missing. Davey is a bit of a tabloid conspiracy nut and most of his friends and acquaintances have heard all about his oddball theories but at least this one is plausible; Davey believes his next door neighbor, Wayne Mackey (Sommer) is a serial killer responsible for the disappearances. His friends – leather jacketed punk Eats (Lewis), rotund Woody (Emery) and smart-as-a-whip Curtis (Grüter-Andrew) are skeptical at first but soon they come to believe in Davey and set out to proving it.

This will involve things like going through his garbage, staking out his house and eventually breaking and entering. But that’s not the only thing Davey is keeping an eye on; his pretty former babysitter Nikki (Skovbye) has a habit of undressing in front of her window which Davey’s bedroom window faces. Her parents are divorcing and she’ll be moving away from the neighborhood shortly; she is upset and Davey becomes her confidante, which ends up dragging her into their detective work. She is also skeptical about Davey’s theory since Officer Mackey is outwardly a very nice guy, but there is also a very creepy side to him. As summer comes to a close and the chill winds of autumn and school beckon on the horizon, Davey and his crew will come face to face with something truly monstrous.

The vibe here is a bit Hitchcock meets vintage Spielberg. While there is very much a tone similar to the hit Netflix series Stranger Things this isn’t exactly the same thing. There are no supernatural elements here and for awhile I had a real hard time convincing myself that this belonged among my Six Days of Darkness collection but then again there’s the last ten minutes which…well, I’ll get to that.

The synth-heavy score certainly sets the tone; the music is reminiscent of John Carpenter’s music from the era. There are also lots of visual cues, from the arcade to the G.I Joe walkie-talkies that the boys use. The parents here are generally well-meaning but clueless which brings in the Spielberg element. The idyllic nature of the environment adds not so much to the era but to the time of life of the protagonists. I think that’s a time of life that we all appreciate.

There are some clichés in the plot and characterization. Those who are familiar with Rear Window or Suburbia will feel like they’re on a well-trodden path and Davey’s group of friends are pretty much standard issue for these sorts of Hardy Boys-type films. Also, the identity of the person behind the disappearances is not that hard to pick out if you’re paying attention.

REASONS TO GO: The last ten minutes of this movie are as good as any you’ll see. The filmmakers keep you guessing.
REASONS TO STAY: There are more than a few clichés here and the killer is fairly easy to spot.
FAMILY VALUES: There is profanity including crude sexual references and some nudity.
TRIVIAL PURSUIT: There are a variety of shout-outs to 80s movies including The Karate Kid, The Thing and the Star Wars franchise.
BEYOND THE THEATERS: Amazon, Fandango Now, Google Play,  iTunes, Microsoft, Vudu, YouTube
CRITICAL MASS: As of 10/28/18: Rotten Tomatoes: 67% positive reviews. Metacritic: 57/100.
COMPARISON SHOPPING: Stranger Things
FINAL RATING: 7.5/10
NEXT: Six Days of Darkness Day Three