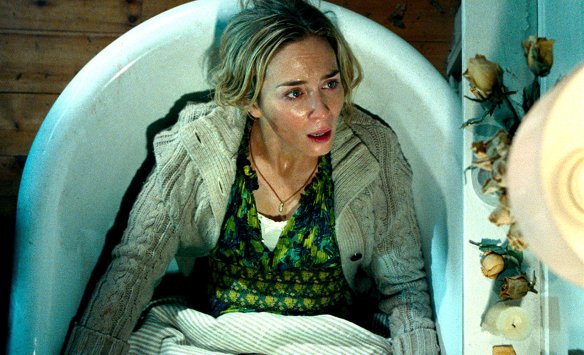 Splish splash I was taking a bath.

Who doesn’t love a little peace and quiet from time to time? Here is a movie that gives you plenty of the latter but not a whole lot of the former.

The premise is fiendishly simple; the Earth has been invaded by insect-like alien creatures who, blind, hunt exclusively by hearing. The slightest noise will bring the down on you and your end will not be pleasant. The Abbott family – papa Lee (Krasinski), mama Evelyn (Blunt), daughter and eldest child Regan (Simmonds) – who in a bit of intentional irony is deaf – middle son Marcus (Jupe) and youngest son beau (Woodward) try to survive in a world where noise is death, a point driven home in the opening scene in a visceral and shocking manner.

Evelyn, to make things worse, is pregnant and her due date rapidly approaches. As any woman will tell you there is nothing quiet about childbirth and certainly nothing quiet about babies. Papa Lee however isn’t willing to say die and has things pretty much figured out – except that almost nothing goes the way he plans it.

The creatures in this movie are terrific; they make logical sense and in fact this is a horror movie that creates its own universe and the rules therein and sticks to them. This is essentially a silent movie although there is ambient noise but it isn’t always quiet. In this space, nobody had better hear you scream.

The performances here are really, really good from Krasinski as the embattled father butting heads with his headstrong daughter and his wife who thinks he’s being too hard on her and Simmonds – so good in Wonderstruck – proves that performance wasn’t a fluke. It is Blunt however who is the most memorable here. Blunt is so emotionally expressive; she acts mainly with body language and facial expression without dialogue to aid her, she communicates directly with her audience without needing subtitles. While I’m not sure Oscar will take notice, she should at least be considered for a Best Actress nod.

Krasinski as a director is promising enough; while he hasn’t broken through to the A-List quite yet as an actor, he once again shows he has the talent to get there eventually. It may turn out that his future lies in directing, which isn’t an easy path to take. Krasinski shows he is more than capable enough to follow that path. Still, it’s hard to dismiss his acting skills, particularly in light of a poignant scene near the end of the movie in which a father’s love shines brightest in the darkness.

This is an outstanding horror movie that is going to end up as one of the year’s best chillers. It’s a shame if you didn’t already catch it on the big screen which is where this would be much more effective; however if you didn’t you at least have the opportunity to see it on your own home video setup. Don’t make the same mistake twice; even if you’re not fond of genre movies you should see this one. Even film buffs are raving about it.

REASONS TO GO: Krasinski the director keeps the tension high throughout and Krasinski the actor once again shows star quality. The monster in this film is outstanding.
REASONS TO STAY: The opening scene may be too shocking and disturbing for some.
FAMILY VALUES: There is a fair amount of violence and bloody images, alongside some children in peril.
TRIVIAL PURSUIT: In the entire film not a single door is opened or closd.
BEYOND THE THEATERS: Amazon, Fandango Now, Google Play, iTunes, Microsoft, Paramount Movies, Vudu, YouTube
CRITICAL MASS: As of 8/13/18: Rotten Tomatoes: 95% positive reviews: Metacritic: 82/100.
COMPARISON SHOPPING: See No Evil
FINAL RATING: 7.5/10
NEXT: Across the River