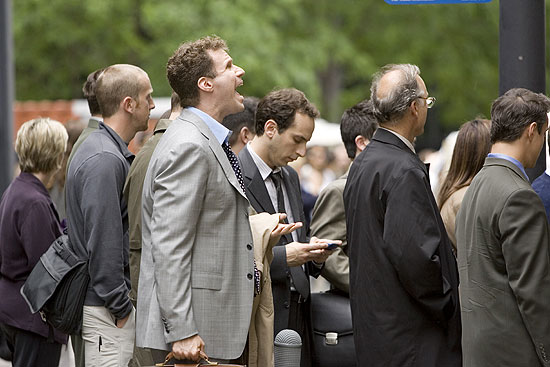 Will Farrell falls prey to one of the oldest gags in the book - the fake falling snowflake.

The implication of the title of this movie is Truth because, after all, that is what is proverbially stranger than fiction. Truth is a very subjective thing, even to filmmakers and perhaps especially so. Indeed, truth is what we make it.

Harold Crick (Ferrell) has no trouble separating truth from fiction. He is an IRS agent, a man used to dealing in facts and figures; everything else comes a distant second. Harold likes his life well-ordered, like the numbers he worships. He has created a world for himself that is quiet, calm and serene. He can walk to the bus stop confident in the knowledge that it will take 53 steps – no more, no less – every time. His life is predictable, and there is comfort in that.

You get the feeling that he is the kind of man that abhors chaos, and when something unusual comes into his life, he is not prepared for it. He begins to hear a voice, a pleasant, educated, well-mannered female voice with a proper British accent. Just the sort of voice most people enjoy listening to. The problem is, Harold is the only one who hears it. Even worse, the voice is narrating what is happening in his life, from counting brush strokes to analyzing how he’s feeling about things. While Harold doesn’t necessarily feel as if he’s being watched, the whole thing is rather creepy.

He goes to psychiatrists, hoping to find an answer but they don’t have one. He talks to government H.R. specialists, but they can’t help him either. He is in the middle of an audit with a spunky baker named Ana Pascal (Gyllenhaal) whom he finds fascinating, but the narration distracts him. At last, when the narrator informs him that his death is imminent, Harold decides to visit a literary professor at the university, Dr. Jules Hibbert (Hoffman). At first skeptical, Hibbert at least has the courtesy to play along. He tells Harold that first, he needs to determine what kind of story he is in; a comedy or a tragedy. The impending death would indicate a tragic fate. Finally, as they are trying to narrow down who the author might be, Harold hears her voice coming from the television. To the professor’s chagrin, it’s Kay Eiffel (Thompson), one of Hibbert’s favorite authors.

For her part, Eiffel has been trying to write her latest book for a number of years without success. She is caught in the middle of a massive writer’s block, and her publishers, trying to help her get her creativity back in gear, send an assistant named Penny Escher (Latifah). At first, Eiffel isn’t very receptive; she’s the kind of woman who likes doing things in her own way. The problem, she tells Penny, is that she doesn’t know how to kill Harold Crick. She’s racking her brain trying to think of the perfect way to do Harold in.

Harold is becoming desperate. He doesn’t want to die, and now he has fallen in love with Ana and she has fallen in love with him. At long last, he finally has a life, but it’s about to be cut short. He has a confrontation with Eiffel, who is completely freaked out at the thought that her character is real. By this time, she has determined how to kill Harold, but now that she knows he’s real, she’s reluctant to do it. She gives Harold the manuscript to read, but he can’t bring himself to; he gives it to Hibbert, who proclaims it her greatest work and his death necessary to making it so. It’s the kind of work that could give people great insight into life and living, but is it worth killing Harold?

I was reminded very much of the work of screenwriter Charlie Kaufmann (Adaptation, Being John Malkovich, The Eternal Sunshine of the Spotless Mind) who is known for writing screenplays that are inventive and challenging with just a hint of the fantastic, and this one also delivers in all those departments. I don’t know if writer Zach Helm was consciously trying to emulate Kaufmann, or was using him more of a role model, but I found this to be a very tight, well-written comedy that challenges the viewer to take a different view of life.

It doesn’t hurt that Will Ferrell gives his best performance to date here. Harold Crick is much more well-rounded and emotionally complex than most of the other characters he’s played, from Ricky Bobby and Ron Burgundy to Buddy the Elf. Like comedians Robin Williams and Jim Carrey before him, Ferrell is stretching himself as an actor and making the next logical step from being a great comedian to being a multitalented star.

He gets plenty of support. Thompson turns a character who could be a cliché neurotic writer into a living, breathing author who has a certain amount of eccentricity, much of which has been brought out by the stress of trying to write a new bestseller. She is ably supported by Queen Latifah, who is very subdued and content to take a more supporting role here. She’s done well carrying movies of late (see Last Holiday) and you get a sense that she is happy to remain in the background and just contribute.

For my money, Dustin Hoffman has the most fun of anyone here. He clearly is enjoying himself throughout, and you can’t help but enjoy yourself with him. He adds lots of nice little touches – being barefoot in his office, taking a Sue Grafton novel to read at the pool, all of which help define his character a little more. Still, I might have enjoyed Maggie Gyllenhaal’s performance the most. She is blossoming into a true lead actress, and I wouldn’t be surprised if we started to see her in much more important roles soon.

Kudos must go to Britt Daniels for a terrific soundtrack. Daniels, the main man for Spoon, also collects several Spoon songs as well as some terrific alternative songs for the soundtrack. Rather than trying to find a group of well-known hits to pad soundtrack sales, Daniels instead gathers songs that fit the mood of the scene nicely, and while some of the bands are well-known in Indie Rock circles, most have little bang past that. No matter; it works real well.

The movie explores mortality and our relationship with it. Harold must cope with his own impending death, and he chooses to live rather than curl up and die. It’s a metaphor, I suppose, for how we all live our own lives, oblivious to the fact that it could be cut short at any moment. Reminders such as this to stop and smell the roses are always welcome, particularly when they are presented as imaginatively and with such great humor as this.

WHY RENT THIS: Farrell and Gyllenhaal make for appealing leads, and they are ably supported. The script is very Charlie Kaufmann-esque in a good way. Terrific soundtrack.

WHY RENT SOMETHING ELSE: Gets a little way out there in some places.

FAMILY VALUES: There is some foul language, some sexuality and implied nudity, but nothing that older teens would consider unusual.

TRIVIAL PURSUIT: Much of the film revolves around mathematics; street names refer to Euclidian geometry, while all of the characters’ last names are of mathematicians, engineers and artists known for art that is a reflection of mathematics. Even the bus line is named after a mathematician.

NOTABLE DVD EXTRAS: There’s an interesting feature on the making of the graphics that enhance the film so nicely.