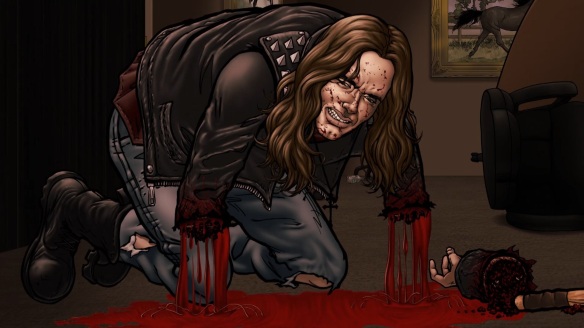 Someone give this guy a hand.

Animated features tend to be fantasy or science-fiction oriented. There are dramas and comedies, to be sure (particularly from Europe), but for the most part there are elements of either one of those genres involved. It makes sense that the horror genre would also be fertile ground for animation, but surprisingly, very few animated features have gone that route.

In this opus, Miriam DeKalb (Lennon) has survived an unthinkable ordeal that has seen all of her siblings killed. Suspected of involvement in the grisly demise of her family, Miriam has been held in the prison wing of the hospital as interrogations by the police have illustrated their disbelief in her story. Then, she is visited by the Gamemaster (Baccarin), an alien being who is able to control time and puts on entertainments in which high-end clients bet on the outcomes. Miriam is given the opportunity to go back 24 hours, armed with the foreknowledge of what is going to happen, and attempt to save her sister and brothers. Should she choose not to, it is likely she will never know freedom again.

24 hours earlier, her father Cyrus (Wise) had gathered them together – sister Kelsey (Hartigan), and brothers Ethan (Haas) and Collin (Siemon) to inform them that he is dying. But rather than using the opportunity to draw the family closer together, their deranged old man – a wealthy arms manufacturer whose run for vice-president of the United States was torpedoed by his children when they informed the press of his many moral failings – chooses to take his revenge for that indiscretion and kill all his children. Sounds kind of medieval (or at least Biblical) to me.

He has locked up the office building and staffed it full of gunmen and set up lethal traps tailored to the weaknesses of each of his children. Miriam tries desperately to tell her siblings what is coming, but that only makes them suspicious that she’s in collusion with Cyrus. To make matters worse, the Gamemaster is changing the rules by changing events from how Miriam remembers them. There are no guarantees that she herself will survive, let alone save her brothers and sister from the maniacal machinations of their father.

Axinn spares no bloodshed and why should he? It’s not like he has to pay for additional fake blood. The problem here is that the various scenarios for each sibling comes off as kind of a lame retread of the Saw series, only much more heavy-handed. Considering that the sky is the limit when it comes to animation, it’s a bit of a drag that Axinn didn’t go more over-the-top here. It feels like a failure of the imagination.

Shatner guest stars as the narrator here and his dialogue is truly cringeworthy. You may be forgiven if you give in to the urge to fast-forward through his narration. It’s not Shatner’s fault; it’s just florid writing. Even Meryl Streep would have a tough time making the narration sound any better than Shatner does.

REASONS TO SEE: Gloriously violent and gory.
REASONS TO AVOID: The story lacks ingenuity.
FAMILY VALUES: There is a ton of bloody violence and gore, rape, nudity and more profanity than you know what to do with.
TRIVIAL PURSUIT: The animation was hand-drawn and took five years to complete. The filmmakers used Archer and Metaloccalypse as inspirations for the animation style.
BEYOND THE THEATERS: Amazon, AppleTV, Fandango Now, Hoopla, Vudu
CRITICAL MASS: As of 11/29/20: Rotten Tomatoes: 67% positive reviews. Metacritic: No score yet.
COMPARISON SHOPPING: The Saw Franchise
FINAL RATING: 6.5/10
NEXT: The Estate

Without law and order, all would be chaos. But who writes the laws and who maintains the order? When the two are one and the same, is it justice or vengeance?

The town of Appaloosa in New Mexico Territory circa 1882 is living without either. The local sheriff and his deputies all disappeared on a routine trip to a local ranch, run by the ruthless Bragg (Irons). In desperation, the town fathers (Spall and Gammon) hire a notorious gunslinger, Virgil Cole (Harris) and his right-hand man Everett Hitch (Mortensen) to become town marshal and protect the town from the increasingly egregious offenses of Bragg’s thugs.

Cole and Hitch make a mark right away when they have a run-in with several of Bragg’s men in the local saloon. When asked to desist from urinating on the bar, they refuse. When told they were under arrest, they guffaw. When told that if they resist arrest or be shot, they resist. When they’re shot, they die.

Bragg is, to say the least, displeased and a wary standoff exists between the vile rancher and the deadeye lawmen. Into this mix comes a young ranch hand who witnessed Bragg murdering the previous marshal in cold blood and is willing to testify. A more devastating development comes in on the stagecoach, Miss Allison French (Zellweger), a widow of limited means and resources who is neither a schoolmarm or a lady of the evening. Instead, she plays piano – and not very well. However, she knows how to use her considerable charms to her own advantage and has the unerring instincts of a survivor. A showdown is inevitable, and the world of Appaloosa will never be the same afterwards.

Harris, one of the finest actors of his generation, hasn’t sat in the director’s chair on a feature length film since 2000’s Pollack and this film couldn’t be more different than the other. There are elements of the old school western to this, but it is firmly New School western as well. It isn’t as violent and brutal as say, Sam Peckinpah might have done it and it isn’t as iconic as Clint Eastwood might have done it.

Instead, this is a movie that is extremely character driven. Virgil is less educated, prone to using words he has difficulty in pronouncing or even remembering; Everett is smarter, quieter, and content to be second banana to Virgil but is as dangerous as a rattlesnake in his own right. Bragg is a steely-eyed villain of the traditional Western, evil because he can be. All three actors in these roles do fine jobs.

At the core of the movie is the relationship between Virgil and Everett, and it is a friendship that is totally believable. Certainly Virgil is not without his flaws, but Everett never questions his boss openly and when he does, only because he sees danger coming. Otherwise, he is fine with letting Virgil do his thing, which sometimes can be unhealthy for those who cross him.

Unfortunately, Zellweger’s Allison is less easy to get a handle on. In these more enlightened times she might come off as manipulative and disloyal, but she is really a pragmatist. She gives her loyalty to whomever can best protect her and provide for her and if something better comes along, she gladly takes it. It’s not a flattering role, but Zellweger bravely assumes it, warts and all.

The big problem with Appaloosa lies in its pacing. Harris is content to let the characters drive the plot rather than the other way around. The advantage to that is that it allows the characters to become real people in our eyes; the disadvantage is that the plot moves along at a fairly majestic place, making the movie feel longer than it actually is. The fact that there are a couple of false codas in place before the final denouement doesn’t help matters.

I will admit to having a soft spot for Westerns. Not because I’m a particular fan of them mind you but because I have a soft spot in my heart for underdogs and no genre fits the description of underdog in Hollywood better than Westerns. They are archaic in many ways and a throwback to a different time and maybe that’s what I like about them most. When well-executed, they are wonderful entertainment. I wanted to like Appaloosa much more than I did, and in some ways, despite its flaws, I still admire it. Unfortunately, I can’t in good conscience recommend it completely because of the egregiousness of its flaws. However, I can say that lovers of good Westerns will find a lot to like about the movie. Those who aren’t so fond of Westerns should mosey on to another choice in the video store.

WHY RENT THIS: Westerns are few and far between these days and ones that give you pause to think even more so. Strong performances by the cast and wonderful cinematography make this a solid effort.

WHY RENT SOMETHING ELSE: The pacing drags in places, making the movie seem longer than it actually is.

FAMILY VALUES: There is some violence and a modicum of harsh language, just enough to make this for mature teens and older.

TRIVIAL PURSUIT: Harris and Mortensen both worked on David Cronenberg’s A History of Violence.

NOTABLE DVD EXTRAS: There are four featurettes here but two worth noting; one on the historical accuracy of the film, mostly to do with costume and set design, and an interview with legendary cinematographer Dean Semler.

Note: While I saw this at the Florida Film Festival, it isn’t scheduled to be released until a to-be-determined date this summer. A full review will be posted on its theatrical release date or DVD release date. In the meantime, here’s a mini-review.

Edward Norton stars in the dual roles of Bill, an uptight but brilliant academic and Brady, an Oklahoma pot grower who is equally brilliant but pot-addled into a life of lesser accomplishment. When Brady gets into trouble with a drug distributor, he lures his identical twin brother Bill home by faking his death. Once there, Bill gets subjected to a life he left behind on purpose and in the process discovers the family he’d turned away from. With a barrel full of excellent performances led by Norton but including director Tim Blake Nelson, Susan Sarandon, Keri Russell, Richard Dreyfus and Josh Pais, the movie takes a startling left turn about two thirds of the way through that is unexpected but delightful. It’s a very well made movie that will grow on you, pot references aside. See it at a film festival near you or at your local art house, or if not, on DVD when it comes out in that format.