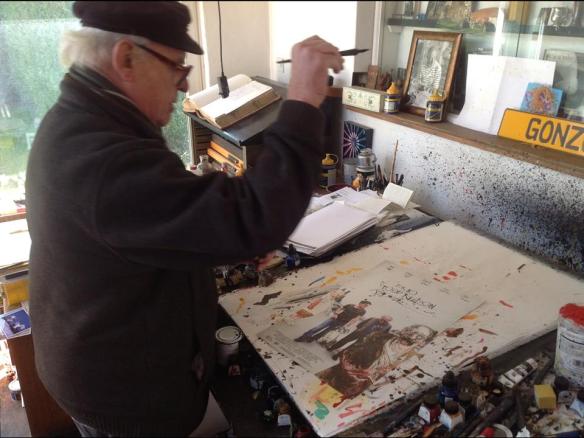 The artist in his workshop.

If you look at the names in the cast of this documentary, you’ll see some of the greatest and most iconoclastic minds of the 20th century. That they are all linked by one famously private British artist gives you an idea of the esteem that he’s held in and the kinds of people who love his art.

Ralph Steadman moved from Great Britain to New York in the 1950s and the following decade met Thompson on a trip to the Kentucky Derby. Steadman would become the illustrator of Thompson’s books and his style and images have become permanently linked with Thompson’s prose. His association with Thompson helped make him essentially Rolling Stone‘s house cartoonist during the glory days of the magazine.

His style which utilizes great big spatters of India ink and other materials is beautiful and grotesque at the same time. We see his technique which is perhaps unique in all of art; when he scatters paint spatters across his canvas, he is almost angry as the liquid hits the surface with an audible SNAP.

Thompson and Steadman maintained a friendship that was often dysfunctional – Steadman hints at the verbal abuse that Thompson would occasionally heap on him – but the genuine affection is evident between both men.

Depp acts as kind of a host and occasional narrator here, appearing onscreen at Steadman’s home and studio in Kent, England to converse, reminisce and utter the word “amazing” again and again while perusing books of Steadman’s artwork while wearing ostentatious hats. I can understand why he’s there – the presence of Depp doubtlessly enticed Sony Classics to distribute the film (which reportedly took 15 years to make) and might be expected to attract fans of the star to see the movie.

Sadly however, the effect of having Depp in the movie is intrusive and takes away focus from the subject of the film. I don’t think that could be helped but frankly, I would have preferred a little less Depp and a lot more Steadman. Steadman doesn’t share a lot of himself to the world; he rarely grants interviews and when he does almost never reveals any personal information. He prefers to let his artwork do the talking for him.

Steadman does make it clear that he sees the role of art as a means to change things for the better, which is admirable. While Thompson did copious amounts of drugs and partied maybe as hard as anyone in history ever has, Steadman did no drugs and focused his attention on social and political causes, many of which were the subjects of his art. His wit is often scathing and generally on the sly side which is on good display here from the opening frames when the Sony Classics logo is displayed in Steadman’s preferred font.

Steadman admires disparate talents like Da Vinci and Picasso, and there is an element of the cave drawings in his art as well, a kind of modern primitivism. The interpretation of art is an individual thing – what I see when I look at Steadman’s work will be somewhat different than what you see. That’s the beauty of art – we see it through our own perceptions and something I miss you’ll latch onto, and vice versa. Everyone interprets art individually.

Along with the Depp thing, I thought the film dragged a bit in places and was tedious in other places. Some judicious trimming would have benefitted the film overall. It is also disappointing that we don’t really get to know Steadman well, although we learn a lot about him. For that alone and for being a fly on the wall as he creates makes the film worth viewing, but I can’t help but think that there should have been a better film made considering the subject matter.

FAMILY VALUES:  A fairly steady stream of foul language, some drug references and brief sexual images in an artistic setting

TRIVIAL PURSUIT: Steadman retains all of his original artwork. The only art he sells are copies or prints of his work which he signs individually.