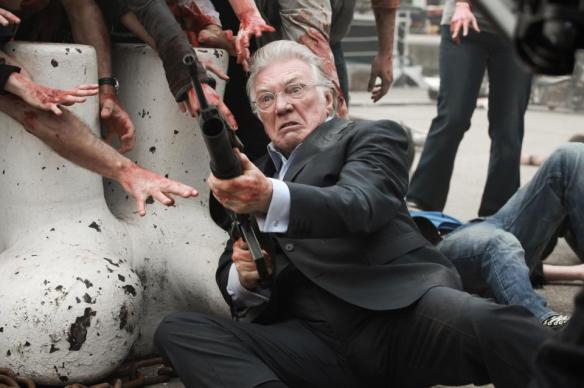 Alan Ford knows what to do with Jehovah’s Witnesses that get a little too aggressive.

Zombies are the new vampires and fortunately none of them are sparkling, although we have had some sensitive boyfriend zombie sorts (Warm Bodies). But they’ve never run into opposition like they would have in the East End of London.

A couple of construction workers working on a condo project unearth a tomb from the 16th century with a warning from King Charles not to disturb the contents within. Being modern day men, of course they do and release a plague of zombies for their troubles.

Another victim of the condo project is a retirement home where rough and tumble Ray (Ford) resides. His grandsons Terry (Hardiker) and younger brother Andy (Treadaway) don’t want to see the residence torn down but there doesn’t look to be a way out – they’d have to buy the property back from its owner and they don’t have that kind of cash.

But they know where they can get it. With time being a factor, applying for a loan is out of the question. They’ll just have to get the money the old-fashioned way – they’ll have to steal it. Of course, while they’ve had the odd brush with the law, neither one of them is exactly a criminal genius. They’ve added a few bodies to their brigade – their sharp-tongued cousin Katy (Ryan), their somewhat bumbling friend Davey (Doolan) and the one legitimate villain – Mental Mickey (Thomas), a veteran of the Iraq war with a steel plate in his skull and a surfeit of viciousness.

During the robbery, the bank manager presses the panic button, bringing down the police. The desperate criminals take hostages – Clive (Gardner) and comely Emma (King). When they go out to face the cops, the cops are all dead and a flock of zombies is chowing down. They get away in the van but Mickey is bitten. They manage to make it back to the hideout and debate on how they’re going to get their grandfather out of the retirement home. They know he’ll want to take as many friends as he can so their van is out of the question, particularly since it doesn’t always start right up. Mickey turns not long after but head shots don’t work with him because of the steel plate. Instead, a hand grenade is stuffed in his mouth. Innovation is key to surviving the zombie apocalypse.

Meanwhile, back at the retirement home, the zombies are swarming and Ray, his girl Peggy (Blackman) and friends Daryl (Selby), Doreen (Hale), Eric (Sutton) and Hamish (Briers) take refuge in the kitchen. With the van out of the question, Andy and Terri “borrow” a double decker bus and head on out to the retirement home with the surviving members of their gang. Even if they can liberate these none-too-spry pensioners from the surrounded kitchen, where can they go?

This is really quite funny more than it is serious horror and gore, although there’s plenty of that. I’d say it’s a comedy with horrific overtones more than anything else. The cast is fairly well-known in Britain with Blackman being the best known across the pond, largely due to her iconic role of Pussy Galore in Goldfinger (and for preceding Diana Rigg in The Avengers – not the Marvel version). The humor is, typical for British comedies, pretty dry although Americans who like their humor over the top will find some gags to love – my favorite was Hamish in his walker being chased by a slow-moving shuffling zombie, complaining “why is it going so fast?” as he plods his way towards safety.

There’s nothing really subtle here at all and they goof on zombie movies not only of the Romero persuasion but also some of the more persistent tropes of the genre. People who are pretty familiar with zombie movies will find a few in-jokes scattered about. Of course these are cockneys for the most part so they use the rhyming cockney jargon (i.e. apple and pears for stairs) that will go sailing over the heads of American audiences. I suspect the average cockney won’t give a crap if it does.

This is entertaining on both fronts – both the comedic and the horrific – that will satisfy fans of both genres. Even Da Queen, not a big fan of horror movies, enjoyed this far more than she thought she was gonna. I understand that the distributors are planning a late summer American release for this – if you see it playing anywhere near you, by all means take the opportunity to see it. It’s one of those delightful hidden gems that you hear nothing about that turns out to be really good and those are definitely one of life’s great pleasures for a movie buff like me.

REASONS TO STAY: Some of the dialogue is difficult for American audiences to figure out.

FAMILY VALUES:  There’s lots of zombie gore goodness, a surfeit of foul language, plenty of violence, a few disturbing images and some sexuality.

TRIVIAL PURSUIT: This would turn out to be the final feature film role for Briers, one of Britain’s most beloved actors (mainly for stage and television).

CRITICAL MASS: As of 5/13/13: Rotten Tomatoes: 73% positive reviews. Metacritic: 51/100; has mostly played the festival circuit after a brief British theatrical release; may be coming to a midnight movie emporium near you.

COMPARISON SHOPPING: Shaun of the Dead

NEXT: Far Out Isn’t Far Enough: The Tomi Ungerer Story