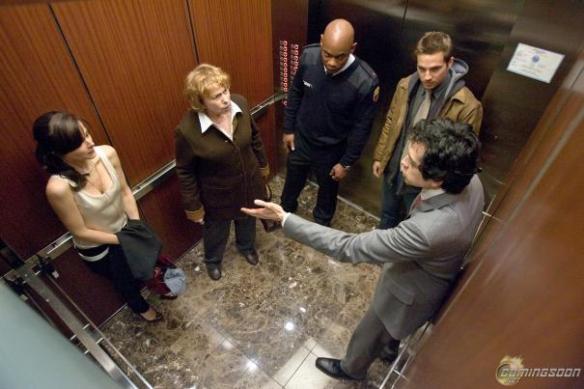 Something smells bad on this elevator and I think it's coming from YOU!

Five strangers get on an elevator in a Philadelphia high-rise. Midway through their trip up, the elevator gets stuck. Not an unusual situation, granted, nor one that’s generally more than inconvenient. However, one of the people aren’t who they say they are, and what’s going on in the elevator is nothing natural at all. This is the first in a series of Night Chronicles, movies produced and conceptualized by M. Night Shyamalan but not directed by him.

See the trailer, promo and a clip here.

Rating: PG-13 (for violence and disturbing images, thematic material and some language including sexual references)

(Lionsgate) Starring the voices of Justin Long, Hayden Panattiere, Dennis Hopper, Danny Glover. Two Canadian wolves – one an Alpha, one not so high up in the pack – are tranquilized and delivered to Idaho to repopulate the wolf population. That is so not happening, so the two make their way back to Canada and find they have to work as a team in order to make it back in one piece – and they make a pretty darn good team.

Rating: PG (for rude humor and some mild action)

(Sony Classics) Ben Mendelsohn, Joel Edgerton, Guy Pearce, Jacki Weaver. After a young man’s parents die, he goes to live with his grandmother, who turns out to be the doyenne of a Melbourne crime family. Not only is she the nastiest piece of work since Ma Barker, she and her three cold-blooded sons are also deep in a war with the Melbourne police, some of whom are more unscrupulous than the crime family itself.

(Sony Classics) Anna Mouglalis, Mads Mikkelsen, Elena Morozova, Natacha Lindinger. In the Paris of the Jazz Age, an unorthodox fashion designer and a controversial Russian composer meet and begin a torrid affair that will mark the most fertile creative period for both parties. This covers a different period in the life than that of the earlier biopic Coco Before Chanel.

Rating: R (for some strong sexuality and nudity)

(Screen Gems) Emma Stone, Penn Badgley, Amanda Bynes, Patricia Clarkson. A high school girl who has no reputation whatsoever pretends to have sex to help out a gay friend, which changes her reputation – and the way she’s viewed by her peers – overnight. Unfortunately, there are unintended consequences as other guys who are getting picked on are lining up to have their reputations enhanced by having the world think they’ve slept with her. It’s “The Scarlet Letter” for the Nickelodeon generation!

See the trailer, interviews, promos, a featurette and clips here.

(Warner Brothers) Ben Affleck, Rebecca Hall, Jon Hamm, Jeremy Renner. When an attractive bank manager is taken hostage for a brief time by a group of bank robbers, she thinks her ordeal is over. However, she didn’t count on one of the robbers falling for her and pursuing a relationship. Not that she knows it’s him – she was blindfolded at the time. Oh, and an FBI agent who looks a lot like a Mad Man is on his tail and she might be the key who can connect the dots, which might make the bad guys nervous enough to bump her off. Did I mention Affleck also directed this movie? What was I thinking?!

Rating: R (for strong violence, pervasive language, some sexuality and drug use)