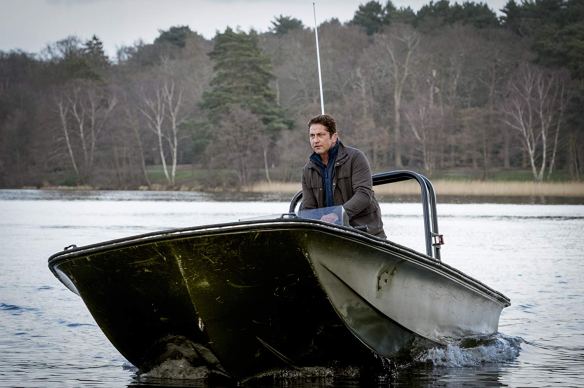 An assassination attempt on the President leaves his trusted Secret Service agent and confidante Mike Banning wrongly accused. He is forced to go on the run to clear his name, keep his family safe and root out the real threat to the country and stop it before it’s too late.

See the trailer, video featurettes and a clip here
For more on the movie this is the website
Genre: Action
Now Playing: Wide Release
Rating: R (for violence and language throughout)

(Sony Classics) Michelle Williams, Julianne Moore, Billy Crudup, Abby Quinn. The administrator of an orphanage in India gets an unexpected and generous donation from a mysterious benefactor in New York. She must go to the Big Apple to accept the gift in person but there is much more going on there than meets the eye.

See the trailer and video featurettes here
For more on the movie this is the website
Genre: Drama
Now Playing: Regal Winter Park Village
Rating: PG-13 (for thematic material and some strong language)

(NEON) Naomi Watts, Octavia Spencer, Kelvin Harrison Jr., Tim Roth. Ten years after adopting their son from Eritrea, a pair of suburban white parents believe their son has a bright future ahead of him. An academic all-star, well-regarded in the community and an example for his peers, Luce turns in a term paper with a troubling point of view. His African-American teacher begins to fear the worst which puts her into direct conflict with his parents.

See the trailer, clips and video featurettes here
For more on the movie this is the website
Genre: Drama
Now Playing: Regal Winter Park Village
Rating: R (for language throughout, sexual content, nudity and some drug use)

(IFC) Aisling Franciosi, Sam Claflin, Baykali Ganambarr, Damon Herriman. In early 19th century Australia during the penal colony days, a woman suffers repeated sexual assault at the hands of a British officer. When her husband intervenes, the officer murders both her husband and her infant. Destitute and bereft, she goes on a journey to exact revenge. This previously played at both the Miami Film Festival and Florida Film Festival; you can read the review by clicking on the link in the “Scheduled For Review” section below.

See the trailer, a video featurette and a clip here
For more on the movie this is the website
Genre: Historical Drama
Now Playing: Enzian Theater
Rating: R (for strong violent and disturbing content including rape, language throughout and brief sexuality))

(Affirm) Alex Kendrick, Priscilla C. Shirer, Shari Rigby, Cameron Arnett. When a small town is devastated by a plant closing throwing thousands out of work, the local high school basketball coach wonders what sort of future he has in the town. Pressed into service to coach the girl’s cross country team, he encounters an extraordinary athlete whose faith may very well move mountains.

See the trailer here
For more on the movie this is the website
Genre: Faith-Based Drama
Now Playing: Wide Release
Rating: PG (for some thematic elements)

(Roadside Attractions) Shia LaBeouf, Dakota Johnson, John Hawkes, Bruce Dern. A young man with Down’s Syndrome and a yen to become a professional wrestler, confined to a nursing home because the State doesn’t have an opening at a proper facility for his care, runs away to find his wrestling hero who runs a wrestling school. He falls in with an ex-con on the run from some angry fishermen as the two search for a place where they can live life on their own terms.

(Fox Searchlight) Samara Weaving, Adam Brody, Andie MacDowell, Henry Czerny. A young woman marries into a wealthy family who have an eccentric tradition; a game must be played at midnight on the night of the wedding to welcome the new member of the family. When she selects a game of Hide and Seek, she discovers that the game is no laughing matter and she is in a fight for her very survival.

See the trailer and video featurettes here
For more on the movie this is the website
Genre: Horror
Now Playing: Wide Release
Rating: R (for violence, bloody images, language throughout, and some drug use)

The Best Summer of My Life
Comali
Tel Aviv on Fire

Here's another plan coming together.

Adapting a beloved television show into a major motion picture carries its own pitfalls as well as a built-in audience. That makes it something of a double-edged sword for the filmmakers; how to keep fans of the original show satisfied while delivering something that stands apart from the original.

Colonel Hannibal Smith (Neeson) heads up a team of Army Rangers who specialize in tackling jobs that most covert teams would run away from screaming like little girls. They never fail because of their specialized skills; Cpl. Faceman “Face” Beck (Cooper) is a smooth lady’s man who is second in command on the team; Cpl. B.A. Baracus (Jackson) is as strong as an ox and is the team’s driver while Capt. H.M. Murdock (Copley) is just on this side of insane (and maybe on the other side) and is the team’s pilot.

They are in the process of leaving Iraq when they receive a visit from two separate people; one is Captain Charissa Sosa (Biel) who has a past with Face, but has come to warn the team to stay out of Baghdad. The other is a smarmy slimy CIA Agent named Lynch (Wilson) – one of many, apparently, with that name – who has a mission for the “Alpha” team; to retrieve plates from the U.S. mint that renegade Iraqis have stolen to print their own U.S. currency. While Hannibal’s superior officer, General Morrison (McRaney) has some reservations, ultimately he decides to allow Hannibal to go, even though it violates direct orders so this mission is strictly “off the books.”

It also pisses off a mercenary from the Black Forest Corporation by the name of Brock Pike (Bloom) whose team was originally set to retrieve the plates but is now being moved aside for Hannibal’s cast of characters. It’s a very tough job involving getting aboard a moving semi while avoiding a convoy of heavily armed trucks escorting the semi, but the A-Team pulls it off.

Unfortunately, when they return to base General Morrison is killed when his jeep explodes and the Black Forest team absconds with the plates. Despite their protests of innocence, the A-Team is accused – and convicted – of colluding with the mercenaries and get sent to prison.

Of course, no prison will hold them for long and with the help of Lynch – who wants to retrieve the plates – the A-Team escape from the four separate penitentiaries that are incarcerating them and go about the business of retrieving the stolen plates, find out who set them up and clear their names in the process. How? Hannibal has always got a plan in mind…

Director Joe Carnahan has a history of quirky movies like Smokin’ Aces to his credit. This is his biggest assignment to date, and he doesn’t do a bad job at all, considering the limitations he has to work with and they are the ones that came with the property.

One of the problems with any television series is that they have a tendency to have a very similar modus operandi for each episode; the details may be different but they tend to follow the same plot outline. When a big budget movie remakes a TV show, generally the film wants to retain many of the same elements of the show in order to establish continuity between the show and the movie; this is to attract the original audience to the movie. However, this can lead to the movie feeling more like a retread than a re-imagining.

To be honest, there is some of that here; however, enough of the movie is fresh and new enough to distance it from the show and make it a little more 21st century, a little different.

Part of the reason for that is the cast. There was some criticism of the casting in online circles which doesn’t make a whole lot of sense to me. Neeson is one of the finest actors in the world and while this is a role he doesn’t usually tackle, he is excellent in creating a Hannibal Smith that recalls George Peppard’s character but is completely Neeson.

He’s solid but Copley, so tremendous in District 9, makes Murdock fascinating; you want to see more of him every time he’s onscreen. Like the Dwight Schultz Murdock, he’s crazy like a fox; just sane enough to make you wonder how crazy he really is. Copley plays the character as a cross between Scott Bakula and Robin Williams. Cooper further cements his standing as a rising star; Face is not only a lady’s man but also a brilliant military strategist. Cooper makes both sides of the character believable and does it with leading man charisma.

Patrick Wilson, impressive as a middle-aged hero in Watchmen, plays a very different character here and he’s quite good. He’s shown some real versatility in his performances and is moving into the territory of actors I look forward to seeing in whatever role he might be cast in. He makes for a terrific villain, almost to the level of my favorite bad guys Alan Rickman and Sean Bean.

As summer movies go, The A-Team is a perfect fit. It’s frenetically paced, light-hearted, well-acted and above all, fun. When I go into a theater on a hot summer day (or even a warm summer evening), I want to forget my cares and be taken on a delightful ride. Here’s a movie that fits that bill to a Mister T.

REASONS TO GO: This new A-Team does surprisingly well. The action sequences are seriously fun and the pacing is fast enough to keep us off-balance. Wilson makes a great villain.

REASONS TO STAY: The same problems the TV show the movie is based on haunt the adaptation.

FAMILY VALUES: There are a lot of big bang explosions which may frighten the tykes; there is some bad language as well as a good deal of sexual innuendo and Hannibal smokes cigars throughout. In other words, probably mature pre-teens and above for this one.

TRIVIAL PURSUIT: The head judge at the court martial of the team is named Carnahan after the director; also an actor credited for “The Greater Escape” movie shown during the Murdock escape sequence is Reginald Barclay, the name of a character played by Dwight Schultz who played Murdock in the original television show.