Dreams serve a therapeutic purpose, allowing the demons of our subconscious to stretch their metaphysical legs, as it were. Nightmares, though, are mostly just unpleasant and while they serve their own purpose, I think it’s safe to say that most of us would rather do without them. Nightmares are a pain in the ass; for some, however, they take over, become obsessions and perhaps imperil our sanity – and perhaps our lives.

18-year-old Canadian high school graduate Sarah Dunne (Stone) is one such. Every night she finds a different place to sleep – a friend’s house, the playground at her local park and so on. She is subject to sleep paralysis and vivid, terrifying dreams that have begun to take over her life. She has had a falling out with her mom and generally avoids her, stopping by her home only to shower and grab a change of clothes.

When she is given a flyer advertising a sleep study, she’s intrigued. A safe place to sleep where she will be monitored, where she’ll be paid and best of all, perhaps a cure for her affliction can be found. It’s a win-win-win situation. But right away, she senses that there is something not quite aboveboard in the study. The man running it, Dr. Meyer (Heatherington) seems to be way creepier than she would like, and the questions his assistant Anita (Ryski) asks following her night’s sleep are invasive and troubling. Worse yet, there is creepy nerd Jeremy (Liboiron) who may or may not be stalking her nd who may or may not be willing to tell her the dirty little secret behind this particular sleep study.

But things take a lurching turn for the worse when it begins to feel like Sarah’s waking life and dream life are beginning to merge, with frightening consequences.

Burns, in his second feature film, has some really promising ideas here, which sadly don’t quite add up to a completely satisfying film. The moody dream sequences are seriously underlit, which while atmospheric also makes it hard to figure out what’s going on at times which gets frustrating when repeated several times throughout the film. He also has a good sense of style; the movie becomes more dream-like the longer it goes on until he climax which is, sadly, a bit unsatisfying.

Stone has a kind of fresh-faced appeal and while her character is made to assert her over-18 status a bit too much – probably to make her romance with an older man a little less cringe-inducing – she still comes off as a strong, charismatic lead. Some of the imagery here is truly frightening and isn’t something you will want to watch just before bedtime. There is also a bit more technobabble than I generally like – that’s more of a personal preference – and Sarah’s angst which seems to stem from a rift with her mom which is never explained can get tiresome to people who don’t really care what the latest social media app has to offer.

That’s not to say there isn’t anything worthwhile here. Burns has an original voice and some decent instincts, but I get the sense that he isn’t quite adept at making that voice audible just yet. I’m hoping that he’ll continue to develop his talents because there’s definitely a sense that he’s got something special inside him that one day is going to flower and blow us all away. While this isn’t the film that’s going to do that, it certainly has enough positives that you might want to check it out or at least keep an eye out for his future endeavors. 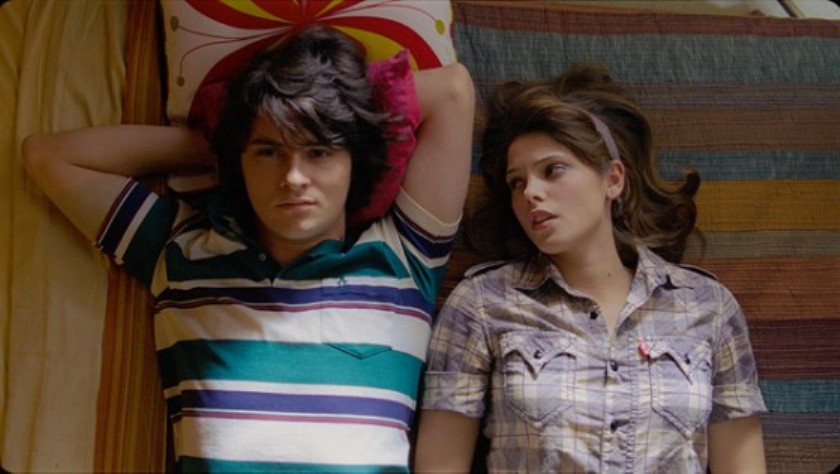 The summer after we graduate high school is a kind of a cusp between the first stage of our lives and adulthood and yet speaking just for myself I don’t even remember it very well. Different responsibilities and higher expectations are demanded of us as we enter into college, the military, the job market. The world becomes a much different place for us than it was in high school and we struggle to figure out how to adjust.

In a small Texas town in 1983 Ritchie Wheeler (Fernandez) has graduated high school and is managing a roller skating rink called Skateland. His sister Mary (Ramm) and girlfriend Michelle (Greene) are pushing him to submit college applications but Ritchie is in no hurry to go to college. He enjoys hanging out at Skateland with his friends, particularly Brent (Freeman), Michelle’s brother who has just returned to town after a stint as a motorcycle racer. There’s also Kenny (Handley) who is a rich kid who hosts frequent keggers and appears to be going nowhere.

You’d think Ritchie’s parents would be pushing him to start moving forward with his life but his Mom (McGraw) and Dad (Cullen) are having serious marital problems which take up most of their focus, leaving none upon their son who is beginning to drift aimlessly. He’s a talented writer (as most kids in movies like this are) but he’s in danger of having nobody ever find that out. And when Skateland announces that it’s closing its doors, his troubles are really beginning because Michelle, getting ready to attend the University of Texas in Austin in the fall, is beginning to suspect that she’s growing up while her boyfriend isn’t….and that they might just be growing apart.

Skateland is going for a bittersweet nostalgia which isn’t a bad thing. It definitely takes its cues from movies of the era with a kind of John Hughes-like appeal in teens who are reaching a crisis point in their lives. Whereas Hughes made those films funny and poignant, Burns has to settle for poignant.

The young cast is pretty decent here. Greene, who appeared in the Twilight films, is actually a pretty good actress and even though she doesn’t get as much screen time as the hunky Fernandez, when she is on she’s performing so confidently that you can’t help but notice her in a good way.

I do like how Burns captured the era so well – an era that I lived through, so I can attest to the look, the design and especially the attitudes. Whoever chose the soundtrack chose wisely; the songs really brought back the era nicely in my mind. One should never underestimate the importance of music to setting a scene of time and place in a movie.

This reminded me of a lot of different teen angst movies, many made in the era being depicted here. That’s not always a bad thing but sometimes you wind up asking yourself the question whether or not your time would have been better spent watching those films instead of this one. My big complaint is that it really doesn’t add anything to the coming of age genre, but it doesn’t disgrace it either. You could do worse than seeing this movie as an example of the teen rite of passage film. Then again, you could do better, too.

WHY RENT THIS: Captures the era perfectly. Some strong performances.

WHY RENT SOMETHING ELSE: Has been done better in other movies.

FAMILY VALUES: There is teen drinking, smoking and drug use as well as a little violence and sexuality.

TRIVIAL PURSUIT: The film is dedicated to the memory of John Hughes, a director whose work the movie emulates somewhat.

BOX OFFICE PERFORMANCE: $19,411 on an unknown production budget; it’s unlikely that the movie made any money.