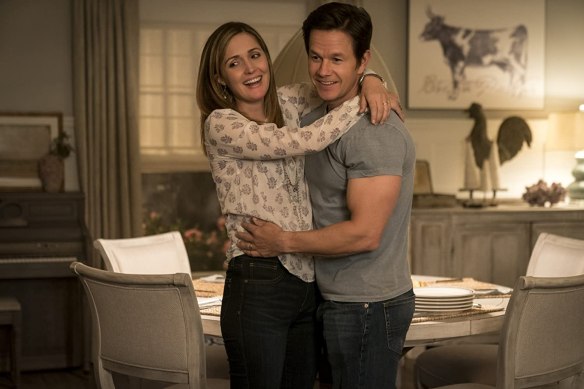 Mark Wahlberg and Rose Byrne get a little cuddle time in.

Having been an instant Dad, coming into a family in which there were already children, I imagine I have a bit of a leg up on the adoption comedy Instant Family. In some ways, the movie tackles some serious issues with the foster care system and of dealing with kids who have been through the ringer. It also has some humor which can be charitably described as weak; on top of it you have an awful lot of cursing, a fair amount of which is done by the kids themselves. This is a movie that isn’t quite sure what it wants to be.

Which is weird because writer-director Anders based the film on his own experiences adopting three Hispanic children, which is what childless Yuppie couple Pete (Wahlberg) and Ellie (Byrne) do. They end up with problematic teen Lizzy (Moner) who still harbors hope of reuniting with her birth mother, her little brother Juan (Quiroz) who is as clumsy as any anxious kid is and whose first instinct is to always apologize profusely whether he’s responsible or not, and finally little Lita (Gamiz) who is a bundle of need and a volcano when she doesn’t get what she wants.

Trying to guide these prospective parents through the process are agency workers Karen (Spencer) and Sharon (Notaro), as well as Ellie’s introspective mom (Hagerty) and Pete’s bulldozer of a mom (Martindale). When the birth mom of the kids, who has a history of drug addiction, decides she wants her kids back, Pete and Ellie, who have at times regretted their decision, suddenly realize that they need these kids as much or more than they need them.

It’s definitely a movie with all the feels, the kind of thing that infuriates a whole lot of movie critics who hate being emotionally manipulated, but in all honesty, I think Instant Family comes to its emotional high and lows honestly. Wahlberg is at his most charming here, and he has a solid cast to back him up including Oscar winner Spencer, Notaro (one of the finest comedians of our time) and particularly Martindale who over the past decade has become one of the most reliable and interesting character actresses in Hollywood.

It’s a shame that there’s so much here that doesn’t work, from Isabelle Moner doing her best to channel Selena Gomez, to the somewhat lame humor which never quite hits the mark, to the script that doesn’t really rise above its own limitations. I think the movie would have been better served to try less to be light comedy and harder to be a bit more realistic about the pitfalls – and joys – of being a foster parent can be. It’s not quite a Hallmark Channel movie, but it needed a little more firm direction in terms of what it wanted to be.