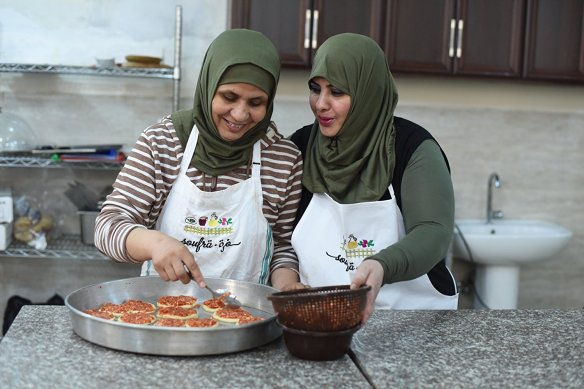 This is the joy of cooking.

The refugee crisis around the world has been heartbreaking and seems to only be getting worse. In Lebanon, the Bourj el-Barajneh was founded in the outskirts of Beirut, Lebanon back in 1948 for Palestinian refugees. It has recently swelled as Syrian refugees have joined them in the densely populated and cramped ghetto, complete with knots of electrical wires overhead that short out whenever it rains.

Life for refugees in Lebanon isn’t a kind and easy one. There are certain occupations that refugees cannot work in; there is absolutely no path to citizenship. Most residents of the camp just while away the days, wallowing in frustration and hopelessness. Into this world was born Mariam Shaar, who quit school at an early age to help her family. She got the idea that the women of the camp, particularly hit hard by the malaise that permeated the camp, could contribute the skill nearly all of them shared – cooking.

She founded Soufra, a catering company whose name approximately to “full table of bounty.” She wisely surmised that working would give the women a sense of purpose and of self-worth. At first her company catered school lunches, serving up traditional and healthy food for the children of the camp. Soon word got around of their delicious food and they were hired for corporate functions and high-end parties. The business was taking off.

But beyond that Mariam had enough native business acumen to realize that her group must continue to grow or stagnate. To that end she initiated a Kickstarter campaign so that Soufra could purchase their very own food truck. Sounds like a good idea, right?

What she didn’t anticipate were all the bureaucratic hurdles that she would need to overcome in order to make the purchase. Even with the help of a sympathetic lawyer, it seemed like the refugees were regarded with suspicion and the women even more so. However, every time she was told “no” only added to her determination to make the food truck a reality and if there’s anything I’ve learned in over 20 years of marriage, never get in the way of a determined woman.

Morgan wisely doesn’t turn this into a crusade. More than anything, this is a story about how determination and faith can move mountains. It’s an inspirational character study – not just of Mariam, who is certainly the front and center of the group, but all the women who work together and form the kind of bond that can only come with hard work and long odds. The inspiration comes from within.

I’m not really well-versed with middle eastern cuisine but the food here looks absolutely tasty. Those who recognize these recipes as comfort food will no doubt have an even closer connection to the film than I did – but even those who don’t like myself may well find themselves wanting to take a crash course in Palestinian and Syrian cuisine. I know I do.

Sometimes “inspiring” is overused when it comes to documentaries but in this case it does fit. While this is essentially on the festival circuit, I wouldn’t be surprised if it shows up on a streaming service relatively soon. Keep your eyes peeled for it. Also, if you want to give some of these dishes a whirl at home, the website (which can be accessed by clicking on the photo above) is selling the Soufra cookbook. It’s expensive but think of it as going to a good cause and not just to some celebrity chef’s offshore bank account.

REASONS TO GO: The story is very inspiring. The film is an eye-opener as to what refugees face on a daily basis.
REASONS TO STAY: Some may note that there is a gut of refugee documentaries out there right now.
FAMILY VALUES: There is some smoking.
TRIVIAL PURSUIT: One of the executive producers is actress/activist Susan Sarandon.
CRITICAL MASS: As of 6/11/18: Rotten Tomatoes: 100% positive reviews. Metacritic: 77/100.
COMPARISON SHOPPING: Any episode of Anthony Bourdain: Parts Unknown and Anthony Bourdain: No Reservations.
FINAL RATING: 7.5/10
NEXT: Funeral Day

]If the world is indeed going to hell in a handbasket, it follows that it will end with a whimper rather than a bang. Worse than everything ending in a moment is the thought that humanity will die a slow, lingering death.

In 2027, that seems to be the case. It has been 19 years since a human baby has been born and the world teeters on the edge of anarchy and chaos. Only England has a functioning government and it is barely holding on with its fingernails, resorting to a brutal totalitarian government that has banned any immigrants from entering the country, a chilling thought that resonates even more in 2015 than it did when this was made.

Theo (Owen) works at the Ministry of Energy in a London that is beset by terrorist attacks and open revolt. Immigrants are captured by draconian police, put in cages and forcibly deported. Plagues and famine have made things even worse. One morning he barely escapes a bombing in a cafe that shakes him to the core. He is then kidnapped by the Fishes, a radical Immigrant’s rights group that is led by Julian (Moore), Theo’s ex-wife from whom he separated when their child died 20 years previously.

She offers him a large sum of money to use his connections to get transit papers for Kee (Ashitey), a refugee. He obtains these from his cousin Nigel (Huston) but the papers require someone to accompany her, so Theo is paid to do this. Accompanied by Kee, Julian and her right hand man Luke (Ejiofor), they head for the coast but are attacked. In the chaos, Theo gets Kee to the home of his old friend Jasper (Caine), a former political cartoonist living out his days in isolation, caring for his wife who was left catatonic by government torture.

Pursued by both terrorist forces and the government, Theo and Kee must make their way to the coast and meet a ship from a group of scientists calling themselves the Human Project who would take Kee to safety. Getting there, they must run a gauntlet of hatred as armed conflict breaks out between the government and the refugees with Kee and Theo both caught in the crossfire. Kee however carries a secret that may mean the revival of hope, something that has been thought completely lost.

While the movie was an unabashed critical success (many ranking it on their ten best lists that year), it only received three Oscar nominations mainly for the technical end. That’s a shame, because Owen gave what is to date the best performance of his career. Far from being a typical action hero, he careens from situation to situation, often frightened by what was happening to him, trying to survive by his wits in a situation that was rapidly disintegrating. It is to be noted that while bullets fly in the movie, Owen never even touches a gun.

Moore, a perennial contender for Oscar gold, showed why she continually is in the mix for Best Actress or Supporting Actress. Julian is a strong leader with an iron will, not above manipulating someone she once cared about for the greater good of her cause. Still, the movie does reveal a softer side to the character and Moore plays both well. Caine gets a meaty role as a hippie-like character who smokes a lot of strawberry-flavored pot and has removed himself from society, yet brims with wisdom. It’s as charming a role as Caine has ever played and he’s played some good ones.

The tone here is almost uniformly grim, although the movie really is about hope. Its absence is what plunged the world into chaos; the merest glimmer that it might reappear leads people to sacrifice everything. The ending is open-ended and leaves the viewers to decide whether the ending is bleak or the opposite; I suppose that how you interpret it will largely depend on whether your outlook tends towards optimism or pessimism.

The production design is one of decay, crumbling buildings and streets of fear. There isn’t a lot of gleaming, futuristic set design here; this is a world that is falling apart and the sets show it. The fact that it looks real and familiar is a testament to the production design team and Cuaron. Also, some of the action sequences here are absolutely scintillating, particular the attack on the car alluded to earlier and a final battle between the government and the rebels. They are realistic and for the most part shot with a single camera, lending even more of a “you are there” feel to the film, which many have described as a documentary of things that have yet to happen. There is definitely that kind of feel here.

This is not a masterpiece in my opinion; the mood can get oppressive and considering the state of the world, it can truly make you question whether humanity is worth saving. But questions like that are important to ask, even if we all agree the answer is “yes” (which most of us, I would hope, do). This is a truly impressive movie that may not necessarily be the sort of thing you’ll want to watch as light entertainment, but it’s one that will give you pause. Movies like this are what make science fiction a compelling genre, particularly when it rises above space battles and monsters. Here, the only monster is ourselves.

WHY RENT THIS: Smart and chilling. Fine performances by Owen, Moore and Caine. Extraordinary action sequences.
WHY RENT SOMETHING ELSE: May be too dark and dystopian for some.
FAMILY VALUES: Plenty of violence, brief nudity, some drug use and some profanity.
TRIVIAL PURSUIT: P.D. James, author of the book the movie is based on, makes a cameo as the old woman in the cafe with Theo in the opening scene.
NOTABLE HOME VIDEO EXTRAS: There’s an interview with Slovenian philosopher Slavoj Zizek on the questions raised by the movie, some of which also appears in the featurette The Possibility of Hope which examines how the current global situation (circa 2007) was leading to the future of Children of Men.
BOX OFFICE PERFORMANCE: $70.0M on a $76M production budget.
SITES TO SEE: Netflix (DVD/Blu-Ray Rental only), Amazon, iTunes, Flixster, Vudu, Google Play, M-Go
COMPARISON SHOPPING: The Hunger Games: Mockingjay Part 2
FINAL RATING: 8/10
NEXT: The Chaperone