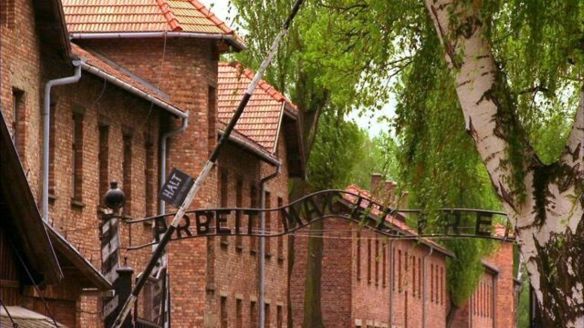 The silent sentinel that is Auschwitz.

The Holocaust remains one of the defining moments of the 20th century. Not because of its brutality, or the horror of it, but because it reminds us that we can be led by the nose to ignore atrocities that are happening in our very midst. Certainly people in Poland had to be at least somewhat aware of the nightmare going on at Auschwitz, Treblinka and Birkenau and yet not a voice was raised in protest. Of course if any were, those voices were as likely to be stilled permanently.

Every year, concentration camp survivors and teenage Jews from all over the world march from Auschwitz to Birkenau, the route of the infamous Death March – except this is a March of the Living, not just a middle finger to the Nazis and the Holocaust deniers but also an affirmation of life. This is a demonstration that the human spirit overcomes and survives. It is hope.

In 2008, the documentary filmmaker Jessica Sanders was recruited by a Brazilian production company to document this event, known as the March of the Living. She followed several teens and several survivors from Los Angeles, Sao Paolo and Berlin. Before the actual March, the participants were taken on a tour of the various Camps, some of which are still standing – and at least one simply a monument to the hundreds of thousands of voices stilled there forever.

We see the gruesome detritus that was left behind; thousands upon thousands of shoes, stacked neatly floor to ceiling; dolls and toys, never to be played with again and human hair, to be used by the Nazis as carpet fiber. The sight of the hair seemed to be particularly disturbing to the teens, many of whom broke down inconsolably. It’s an unforgettable moment.

The problem I have with this 75 minute film is that it’s too short; we don’t get a sense of the journey these teens take. The survivors, we hear some of their horror stories and we are made well enough aware of their justifiable fear that once they are gone (and they are in their 80s and 90s now) there will be nobody to tell their story, nobody to answer the questions of the young. This is the last generation that will have direct access to living Holocaust survivors and the thought is chilling.

But the kids, as is the nature of kids, don’t have the experience and perspective to see it as anything other than what it isn’t – about them. “This could have been me, sixty years ago” says one teen girl in way too much make-up. Some of the teens – to their credit – get it. One makes plans to study at the Hebrew University in Jerusalem after she graduates from high school; she also arranges for the survivors to participate in their graduation ceremony because, as she points out, none of them got to graduate high school because they were in the camps. You can see the delight in the faces of the elderly grads.

But we get no sense of the personal growth these kids experience. One moment their just ordinary kids dealing with ordinary issues, the next they’re seeing the gas chamber at Birkenau. It just feels like we got to that point cheaply, without getting a sense of how this affected them. Some talk about their culture but few seemed to get much out of it more than a sense of accomplishment, that they went to the camps and are somehow better for it. That’s not how it works.

I recognize the difficulty in doing any sort of film about the Holocaust, be it a documentary or a narrative feature. After all, the subject has been tackled in many different ways by many different filmmakers. There really isn’t a lot of new material to add to the conversation. Yes, it is true that this generation and those following must take up the mantle of remembrance, to be the keepers of memory when those who originally lived those memories have moved on, and to pass those memories down to succeeding generations. It is, after all, important that we never forget.

But sadly, this movie has forgotten – that the Holocaust isn’t just something to be blared out at us in capital letters. It affects people differently, like the German girl who felt ashamed of her country because of the atrocities committed in the name of politics. And of course, we can see similar demagogues whipping up the masses against Muslims and Middle Eastern people in general. The sad fact is that we have learned nothing from the Holocaust and despite the best efforts of those who survived it to act as living reminders of the barbarity of our species and its ability to inflict mind-boggling suffering upon each other, the potential for another one is slowly looming it’s shaggy head even as we speak..

REASONS TO GO: Some unforgettable albeit unsettling images.
REASONS TO STAY: Don’t get a sense of the journey these people take.
FAMILY VALUES: There are some disturbing images having to do with the concentration camps.
TRIVIAL PURSUIT: Sanders was nominated for a documentary short Oscar for Sing in 2002.
BEYOND THE THEATER: Amazon, iTunes, Vimeo
CRITICAL MASS: As of 6/28/16: Rotten Tomatoes: No score yet. Metacritic: No score yet.
COMPARISON SHOPPING: Shoah
FINAL RATING: 6/10
NEXT: What’s In the Darkness?