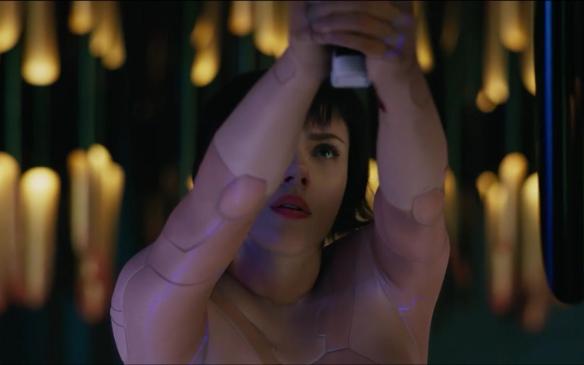 Scarlett Johansson in her skinsuit; adolescent boys of the world, you’re welcome.

Technology is a part of our everyday lives. For the most part, it makes our lives easier although in many cases it complicates things. Biomedical advances have allowed people who would ordinarily have been disabled or worse to live full productive lives. As technology integrates itself more and more into our lives and even into our own bodies, at some point we must re-examine what it means to be human.

Mira Killian (Johansson) wakes up in the hospital with little memory of how she got there. Her physician, Dr. Ouelet (Binoche) informs her that she was the victim of a terrorist attack; her body was so torn up that her mind, spirit and personality have all been transferred into the body of an android. She will be stronger, faster, more powerful – and able to fight terrorists the way most humans could not.

A year later she is better known as Major (for her rank) and she and her partner Batou (Ashbæk) work for Section 9, a shadowy elite government strike force that takes on terrorists. A specific terrorist known as Kuze (Pitt) has been targeting scientists and executives of the Hanka Robotics Corporation, the conglomerate who happens to employ Dr. Ouelet and who were responsible for saving Major’s life.

Kuze seems to know more about Major’s past than the Major herself and the deeper Major looks into the CEO of Hanka, a smarmy man named Cutter (Ferdinando) to whom the head of Section 9, the honorable and imperturbable Aramaki (Kitano) seems to report, the more suspicious she gets of his motives. She begins to realize that she is in a nightmare from which there is no waking – and she might just be fighting for the wrong side.

Based on a 1995 anime (which was in turn based on a popular Japanese manga), Sanders has done a fine job in bringing that anime to the live action scene. Often the shots are literally perfect reproductions of the anime. The cityscape is absolutely breath-taking and while the overhead flyover shots get a little dizzying after awhile, the CGI background never lets the audience down.

Neither does Johansson. Already a fan favorite due to her work in the Marvel Cinematic Universe, she has become one of the biggest stars in the world and this role is really perfect for her abilities. She exudes both grace and strength as well as intelligence and sensuality; it’s no wonder that a lot of fanboy types consider Johansson the most desirable woman in Hollywood. In some ways Major is one of the most complex roles she’s taken on; there is a machine-like coldness to her but at the same time she is tormented by tantalizing glimpses of her past. She is relentless looking in directions her employers don’t want her to explore, and when push comes to shove is willing to risk anything to find out the truth about herself and about Hanka.

Kitano, one of the most revered action stars in Japan who while little known to the general public in the United States is nonetheless held in high regard by those buffs of Asian action movies, shows us why he is the source of such affection. I am always a little leery of using the adjective “inscrutable” in connection with Asian actors but that word best defines his performance here. Partially paralyzed in the face due to a scooter accident 20 years ago, his expression is generally unreadable and when he explodes into action during a glorious sequence there is little warning. It is one of the most satisfying sequences in the movie.

There are a few problems here though. The plot is pretty convoluted and following it isn’t always easy. I get the sense that Sanders and the writing team were trying to make a film that was visually overwhelming (which it is), chock full of exciting action sequences (which it is for the most part) and also thought-provoking (which it is in places). While it is possible to be all of those things at once, it is a very difficult balancing act and Ghost in the Shell doesn’t quite achieve it and as I recall, neither did the original anime although it came closer than this.

Brilliant in some stretches, flawed in others, the film lacks consistency which makes it hard to appreciate those sequences that do work well – and there are more than a few of them. The sensory overload of the cityscape may be troubling to those who are easily overwhelmed but to those who appreciate the detail in the crafting of the futuristic landscape it will be an absolute dream come true. The detail in those backgrounds is truly astonishing but they’ll disappear in the wink of an eye. Never has a movie that looked like it belonged on a theater screen ever needed the benefit of a remote control so that viewers could pause the film just to take in the details. If only there could have been a little been more conciseness in the screenplay; this could have been the first peg in a tentpole franchise but sadly, the box office numbers don’t really support one.

REASONS TO GO: The special effects and action sequences are dazzling. Johansson is a natural action heroine.
REASONS TO STAY: The plot is a bit muddled. The film tries too hard to be all things to all people.
FAMILY VALUES: There is frequent violence, some disturbing images and a few moments of sensuality.
TRIVIAL PURSUIT: The city depicted in the film, although not mentioned by name, is based on Hong Kong although with heavy digital additions.
CRITICAL MASS: As of 5/22/17: Rotten Tomatoes: 45% positive reviews. Metacritic: 52/100.
COMPARISON SHOPPING: I, Robot
FINAL RATING: 6/10
NEXT: David Brent: Life on the Road