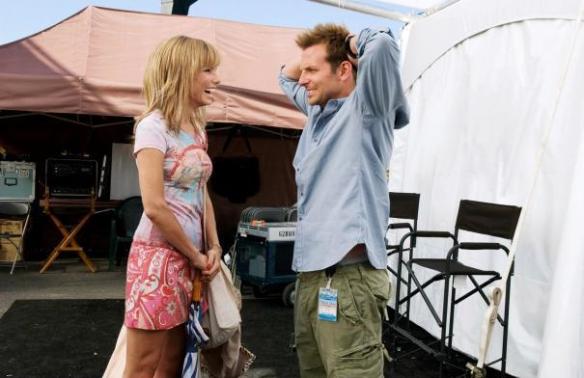 It starts out with a blind date. Cable news cameraman Steve and trivia expert Mary are very different; Mary is socially awkward and very bright, Steve is down-to-earth. The date is over and so is the relationship; at least, Steve thinks so. Mary, on the other hand, thinks she has found the one she’s meant for and she’s willing to go anywhere – and everywhere – no matter what to be with “her man.” Steve wants nothing more to do with her, much to the amusement of reporter Hartman Hughes, who thinks any opportunity to torture his cameraman is a good one. So is it true love? Or is it stalking? I think you can guess the answer.

(Miramax) Jason Bateman, Mila Kunis, Ben Affleck, Kristen Wiig. Director Mike Judge goes from the white collar workplace of Office Space to the blue collar battleground here. The sexually frustrated owner of a culinary extract factory concocts an elaborate scheme to get his frigid wife to cheat on him so that he is free to pursue the hot temp working for him, unaware that his temp is a con artist looking for a big payday and finds one – just as his business is about to be sold for millions. Is this going to be more like Office Space or Idiocracy? Looks more like the former, judging on the trailer.

Rating: R (for language, sexual references and some drug use)

(Lionsgate) Gerard Butler, Michael C. Hall, Ludacris, Kyra Sedgwick. In the near future, mind control technology allows gamers to take control of actual people and play out duels to the death in reality in a game called Slayers. The most successful Slayer of all is Kable; a man ripped from his family and forced to fight in the arena of death. He must convince his player, Simon, to help him escape the game, free his family and stop the billionaire responsible for the carnage.

(Magnolia) Marc Duplass, Joshua Leonard, Alycia Delmore, Lynn Shelton. Two old college buddies get drunk one night and decide to enter an amateur porn contest, but what could they do that will go so far as to push the boundaries of decency that hasn’t already been done before? It’s a sticky question, and the answer is for the two very straight, very heterosexual guys to have sex on-camera. How will they make it work? And who will tell the wife of one of the buddies? Director Shelton pokes at buddy-film conventions while exploring the vast underbelly of the male ego.

Rating: R (for some strong sexual content, pervasive language and a scene of drug use)