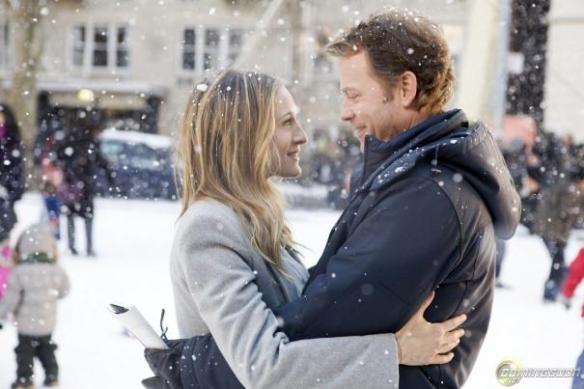 It just doesn't get any more romantic than a loving embrace in snowfall.

There are few people I have more respect for than the working mother. It is very much like juggling alligators; if you mess up even on one gator, you can find your whole world crashing down around you.

Kate Reddy (Parker) is just such a creature. She works as an executive at an investment bank’s regional office in Boston; she has a crusty boss (Grammer), an overqualified assistant named Momo (Munn) who disdains Kate’s commitment to her job, and a backstabbing co-worker (Meyers).

Outside of work she’s got a bitchy mother-in-law (Curtin) and a devoted friend (Hendricks) who thinks Kate has it all together but like most moms, does a lot with smoke and mirrors. She also has a saintly husband named Richard (Kinnear) who is an architect who is just getting a major promotion at his job. She too is working on a big promotion – by coming up with a brand new retirement fund that will appeal to both investors and the bank’s brass as well. She is given a hunky partner to work with – Jack Abelhammer (Brosnan). It also means that she’s going to be traveling to New York a whole lot.

That means guilt for missing her kids life and further guilt for neglecting her husband. It means being made to feel less of a mom by the stay-at-home supermom (Philipps) that works out while her kids are at school and takes advantage of party planners for her kid’s birthdays. Does anybody remember when getting pizza and a cake was enough for a child’s birthday party?

Of course, we all know that sooner or later the gators are going to come crashing down and take a bite (or several) from Kate whose two children are precocious and adorable and well-adjusted which doesn’t sound like any kids I know. We also know that her work career will take off and promise even more travel, putting more strain on her marriage. Isn’t that how it works for all working moms?

This is a movie that has been taking enough lashings from critics to make a Roman galley slave blush. I would venture to guess that most of the critics taking shots at it are not working moms. I was with one when I caught it in the theater and she was quite affected. She thought that the issues that Kate faced were very relatable. That’s a big plus in my book.

I’ve never really warmed to Sarah Jessica Parker as an actress. She’s always seemed shrill and a bit too neurotic for my tastes. She still is here, but the role really calls for it. Kate has a great deal of stress on her and sometimes stress makes us do desperate things, like buying a pie at a deli and trying to disguise it as homemade.

Greg Kinnear is one of the more likable actors out there right now, and he does saintly husband as well as anybody. Despite Kate consistently leaving him holding the bag at home and seemingly dismissing his career as less important as his own, he continues to support her in every way imaginable.

Pierce Brosnan is another solid pro who pretty much always delivers. Here he’s a sweet and respectful colleague who rather than taking credit for her work gives her props. Yeah, sounds like a lot of investment bankers I know – not that I know many. Still, the moral and kindly businessman is not one we see in the movies much these days.

The movie is purportedly a comedy although there is a lack of laughs here (although to be fair, Da Queen found many things funny that were well out of my experience range). It also lacks the gravitas and depth to be a decent drama, which kind of leaves the movie in this limbo of neither one nor the other and not be satisfactory overall.

This definitely has limited appeal which is just fine. If you’re a mom and you work, you’re going to find a lot to love in this movie. If you love a working mom, you might see a bit of insight in there. If you don’t have a working mom in your life, you might want to pass this by – there’s not a lot here for you. That’s all good, but just a word to the wise – be aware that this movie is definitely skewed to a specific demographic and if you don’t fall within it, you might wind up wondering if the local multiplex still gives refunds.

REASONS TO GO: Kinnear and Brosnan are awesome. This is definitely a role well-suited for Parker. The issues that come up for Kate are very relatable for working moms.

REASONS TO STAY: Not funny enough to be a comedy nor does it really have enough depth to be a good drama either.

FAMILY VALUES: There are some sexual references and a bit of innuendo.

HOME OR THEATER: Certainly this will do just as well at home as it will in the theater.

A Hollywood couple – a screenwriter and his actress wife – go to the Deep South to prepare the family home for sale after her father passes away. What appears to be idyllic and down home on the surface bubbles over into a cauldron of emotion and sexuality when her ex-boyfriend decides to give their relationship one last chance, leading to a violent conflict. Based on the controversial Sam Peckinpah 1971 thriller of the same name.

See the trailer, clips, interviews and a promo here.

(FilmDistrict) Ryan Gosling, Carey Mulligan, Bryan Cranston, Ron Perlman. A seemingly mild-mannered Hollywood stunt driver moonlights in a far more dangerous profession – getaway driver for whoever is willing to pay him. He drives, no questions asked, through nearly impossible odds. When he agrees to take on a job for a friend, he finds himself being chased by some of the most dangerous men in the criminal underworld and it’s going to take all his skills if he’s to get away clean.

Rating: R (for strong brutal violence, language and some nudity)

I Don’t Know How She Does It

(Weinstein) Sarah Jessica Parker, Greg Kinnear, Pierce Brosnan, Kelsey Grammer. A Boston mother of two tries to juggle family, marriage, school and career while maintaining her sanity. When she bags a new account for the firm she works for, necessitating frequent trips to New York, things get further complicated when the charming business associate she’s working with proves to be more tempting than she realized.

See the trailer, clips and a promo here.

Rating: PG-13 (for sexual references throughout)

(Disney) Starring the voices of Matthew Broderick, James Earl Jones, Nathan Lane, Jeremy Irons. Disney’s accountants are hoping they’ll be singing “Hakuna Matata” if the brief 3D version of their classic animated hit does well. Shortly afterward, the movie will be making its debut on 3D Blu-Ray so Disneyphiles prepare to unlimber your wallets.

(Sundance Selects) Joyce McKinney, Kent Gavin, Peter Tory, Troy Williams. Acclaimed documentarian Errol Morris takes on a 1977 tabloid scandal, the lurid “Case of the Manacled Mormon” in which a former Miss Wyoming flew to England to, depending on whose account you believe, abduct an upstanding Mormon missionary into sexual slavery or liberate him from a cult. Something this unbelievable could only be a true story.