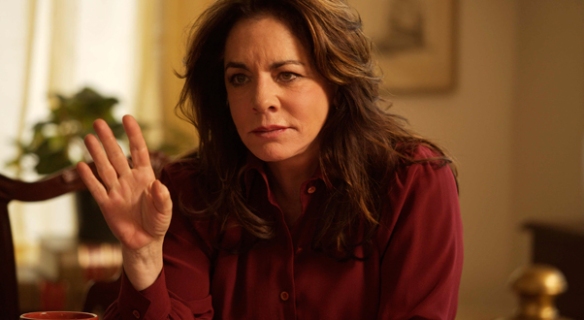 Stockard Channing reluctantly admits how many times she laughed in the movie.

Mid-life crises are nothing to sneeze at. It is a time when we feel the most self-doubt; a sinking feeling that things are as good as they’re ever going to be, that the things we haven’t yet accomplished never will be. Self-doubt becomes our friend and we often make sweeping changes as kind of a last hurrah to our youth.

Gabriel (Hutton) is a successful architect who is married to Annie (Delaney), a devoted wife and has a wonderful daughter, Elizabeth (Ennenga) who is full of joy. He lives in a beautiful home in Manhattan and has everything going for him. While it’s 1979 and the Reagan era is just about to begin, things are looking good for Gabriel.

Except he isn’t happy. While all the elements (you would think) should add up to happiness, the equation just doesn’t work. He is moping and feeling somehow unfulfilled and decides to write a play about it. He finds himself an agent (Channing) and at her urging, begins writing, using incidents from his own life and family to act out his misery.

This brings on some resentment, particularly in his patient wife who has put up with his moping for some time. Gabriel is also finding some attraction to his long-time platonic friend Cari (Sorvino) who runs a hip CBGB-esque nightclub. She feels much the same way but rejects his advances, knowing that an affair between the two of them would be bad for both of them.

As Gabriel places more and more of his attention on his project, he loses his job and his relationship with Annie crumbles. Will his mid-life crisis lead to him losing everything in his life that matters?

There is a decent movie to be had here but what we kind of end up with is a mess. While Hutton is normally a fine performer and he has a strong supporting cast behind him, he is given a role which while it harkens a bit to the films of John Cassavetes lacks the depth of character that Cassavetes was known for. Here, Gabriel’s general despondency feels more like a plot contrivance than anything genuine.

It seems reasonable to assume that Gabriel feels that he is married to the wrong woman; certainly that’s not uncommon among men of middle age. It is also true that men going through the middle age blues tend to do incredibly dumbass things. In that sense, Branch (who also co-wrote this) gets it right. What he fails to do is capitalize on it. The events aren’t organic; it’s like the writers wrote an outline of the story, decided what they wanted to do and never gave a thought as to how to get there properly.

That’s a shame because there is plenty of fertile ground to explore. Branch also lucked out in getting a lively performance from Ennenga, who might turn out to be the most memorable aspect of this film. She lights up the screen whenever she’s on. I do hope that she attracts some notice for it but in all honesty this micro-indie didn’t get much of a release and while it’s been popping up on Showtime from time to time, hasn’t been on the radar for many and for good reason. With a more polished script and a bit more insight, this could have been marvelous instead of mediocre. Maybe the next one will be a better bet.

WHY RENT THIS: Hutton is fine and Ennenga is marvelous.

WHY RENT SOMETHING ELSE: Overbearing at times, preposterous at others. Gabriel’s mid-life crisis feels more like a plot point than a genuine issue.

FAMILY VALUES: There are plenty of sexual references as well as a bit of foul language.

BOX OFFICE PERFORMANCE: $29,731 on an unreported production budget; I’m quite sure this failed to recoup its costs.