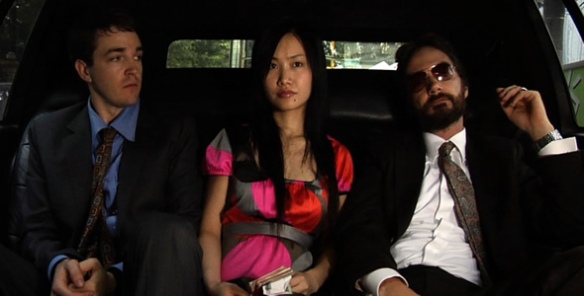 Jackson Kuehn and Dan Sumpter ignore the elephant in the room...or is it a beautiful Chinese woman?

The American Dream is no longer exclusively the property of Americans. The rest of the world has caught up with us in that regard. In fact, it could reasonably be said that given the global economic climate, the American Dream has become de facto the Chinese Dream.

Johnson (Kuehn) dreams of being a multi-millionaire. He has brilliant ideas in the novelty field and is well-versed on how ideas like the Slinky, the ant box and fake dog poop catapulted their inventors into wealth and privilege. Johnson has an idea for a household hygiene product that could do the same for him.

The trouble is, finding investors for his idea is no easy task. The American economy is in a shambles and people are not investing so much these days, so the would-be entrepreneur has to look farther afield for seed money. He sets up a meeting with a Chinese investor on Craig’s List and despite the objections of his family, gathers up his life savings and jets off to Shanghai.

When he is stood up by his prospective investor, he meets instead Magnus (Sumpter), a Brit who knows people and can actually help Johnson achieve his dreams. Johnson impresses him with his pluck and never say die attitude, but Magnus has his own agenda. Can Johnson’s product become the next Pet Rock? Or is Johnson’s naiveté going to sink his dreams like one?

Krant, who played Chang on the “Total Recall” TV series, approaches her first feature with a kind of gung-ho attitude. She takes her camera to locations not normally visited by Westerners in China’s most Western city, the back alleys and side streets. Whether or not she got permission to shoot there is likely problematic. It gives the movie a much more authentic look than had they just stuck to the iconic skyscrapers and amazing buildings that make up Shanghai’s distinctive skyline.

It also makes for seat-of-the-pants filmmaking. One gets the impression that some of the script was written to fit the circumstances. While the overall story is stuck to, certain scenes and vignettes seem to come completely out of left field as if Krant had exclaimed “this is an awesome place to film! let’s write a scene around it!”

Kuehn has a kind of offbeat charm and Sumpter has some charisma as well; the acting overall is more or less solid. Nothing here is going to impress one way or the other in that regard. What you will remember is the movie’s overall charm, it’s devotion to novelty items (and yes, there was certainly some research done into the subject) and its use of Shanghai locations very effectively. For a movie that is virtually unknown other than by those who saw it on the Festival circuit in 2009 and 2010, it’s surprisingly well-made and enjoyable.

WHY RENT THIS: Shot guerilla-style on the backstreets and skyscrapers of Shanghai. Endearing lead character.

WHY RENT SOMETHING ELSE: One gets the feeling it was written on the fly.

FAMILY VALUES: There are a few sexual situations as well as some bad words here and there.