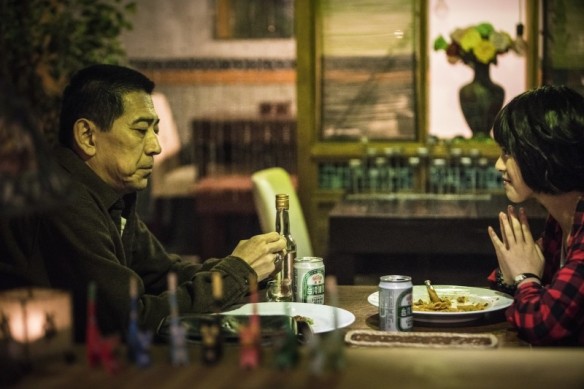 We all lament lost opportunities. When those rare occasions come along that give us second chances, the smart thing to do is to grab them with both hands. The thing about second chances though is that they aren’t always easy.

Keigo (Kao) is a gangster in Taipei. It’s a life that garners him success and respect but costs him his marriage; eventually his wife and daughter Shaowu move to remote Kinmen Island, a county I Taiwan that is geographically closer to mainland China than it is to Taipei. The two women move in with Keigo’s former mother-in-law who has nothing but contempt for her ex son-in-law.

Years later Shaowu is a hard-to-handle teen. Her mother has passed away unexpectedly, leaving her with her grandmother as sole adult guardian. She has a brief meeting with her dad at her mom’s funeral but returns to school where bullies pull a mean prank on her best friend. Shaowu reacts by dumping a pail of manure on the head of her tormentor. Unfortunately, the boy is politically connected and grandma is forced to reluctantly call in Keigo to handle the situation. Realizing she can’t handle her granddaughter who has been expelled from school, she entreats Keigo to take her to Taipei.

Keigo mainly runs a karaoke club where his girlfriend Coco is hostess. At first, Shaowu has a hard time adjusting but soon she makes friends at her school and Keigo’s crew takes a liking to her, particularly Coco who acts like a surrogate mom. He begins to allow himself to dream that he can have a normal life with Shaowu, opening up a restaurant with her someday.However the idyllic family in the making is disturbed by two events; the return of Keigo’s boss from an extended trip to Thailand with plans on extending his interests into narcotics, and a feud between some of Keigo’s younger gang and a corrupt cop. When a shoot-out leaves two of his closest friends dead, Keigo knows he has to act, even if it will leave Shaowu an orphan. Shaowu for her part has strongly identified with her dad and yearns to take up his criminal career, something her dad definitely does not want for her. Something has to give.

This Taiwanese film was a big hit at the box office in Taiwan but has struggled to find an audience outside of where it was made, a troubling trend in Asian movies as of late. The movie recalls some of the great gangster movies of Hong Kong of the 90s with a certain reverence for the criminal lifestyle which many in Asia equate with true freedom. We rarely see Keigo doing anything criminal other than getting into an occasional bar fight and he takes a definite stand on selling drugs which most true gangsters wouldn’t hesitate to do.

Kao, who has been called “the Asian Al Pacino” has an engaging smile and a brooding demeanor. He’s not above losing his temper with his men or his daughter for that matter. He’s made a lot of mistakes in his life and he wears every one of them on his face. Most of all, he doesn’t want his daughter to follow in his footsteps and dissuades her at every opportunity. There is a soft side to him that comes out unexpectedly at times but when he need to be hard, he’s like iron.

Chiu and Kao have a very realistic relationship and the two have a chemistry that would be enviable in almost any film. The heart of the movie is the bond between the two and the veteran Kao and the ingénue Chiu bring it to life. Chiu is an expressive actress with a face that shows an array of emotions even when she isn’t doing much physically. She has a truly bright future as an actress and I hope more of her films make it to the States.

This isn’t what I’d call action-packed even though the title contains the word “gangster” but it isn’t typical of that genre. There are a few scenes that are violent but by and large the criminals are just chatting amongst themselves or chilling in the karaoke bar. There is the shoot-out we spoke about and a reckoning late in the movie but mostly, this is about a slice of life more than it is about a slice of death.

The acting can be a bit stiff for American tastes particularly early on in the film and the movie might be a little longer than American audiences can tolerate in a movie that is paced this slowly but it is certainly worth the patience to check out. The characters are richly drawn and there is a sweetness at the core of the film that I liked very much. This is certainly a film to hunt down and check out.

The New York Asian Film Festival is a wonderful event that exposes the cinema of Asia to an appreciative audience; I only wish that more non-Big Apple residents could experience some of these films, few of which will make it to neighborhood art houses let alone VOD. Hopefully a few of them will get some wider exposure somewhere down the line; otherwise interested viewers will have to do some digging to find an online service that specializes in streaming Asian films like Fandor and AsianCrush that might carry some of these fine films down the line.

REASONS TO GO: Kao and Chiu have a remarkable chemistry. Chiu is certainly a star in the making
REASONS TO STAY: The acting is a bit stiff in places. The film is drawn out a bit too much.
FAMILY VALUES: There is plenty of profanity and some violence.
TRIVIAL PURSUIT: Mei-Juin Chen is best known for her documentaries; this is her first stab at a narrative feature.
CRITICAL MASS: As of 7/1/17: Rotten Tomatoes: No score yet. Metacritic: No score yet.
COMPARISON SHOPPING: Mr. Six
FINAL RATING: 6.5/10
NEXT: Look & See:A Portrait of Wendell Berry