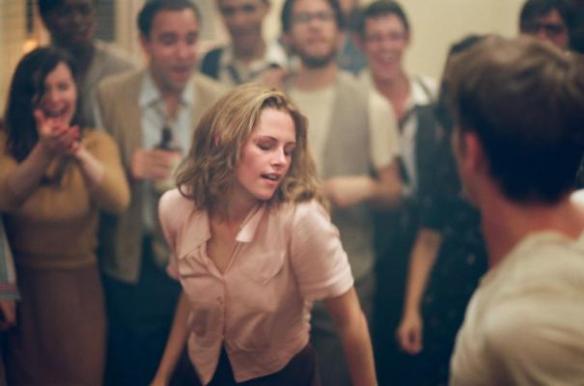 Bella Swan, you’re all grown up!

The classic Jack Kerouac Beat Generation novel On the Road has literally been in development for decades. Nobody really knew quite what to do with the book. It finally got made and was released in late 2012; was it worth the wait?

Young Sal Paradiso (Riley), a stand-in for the author, meets Dean Moriarty (Hedlund) – who stands in for Neal Cassady – through mutual friends. Sal, grieving for his father and a writer stuck in a horrible case of writer’s block, is instantly taken by this young man who is full of life and not especially concerned with convention, rules or…well, anything that gets in the way of him having a good time. Charming and literate, Dean and his 16-year-old wife Marylou (Stewart) serve up alcohol, sex and marijuana with equal enthusiasms. When it’s time for Dean and Marylou to head back to Denver, Sal is invited to come visit.

It takes some time for Sal to get together the gumption and funds to go – even in postwar New York there aren’t a ton of jobs – but he finally does. He rides busses and hitchhikes across the pre-Interstate America and eventually gets there, only to find that Dean is cheating on Marylou with Camille (Dunst). Sal heads back, stopping briefly to pick cotton and have an affair with Terri (Braga).

Later, after Sal has returned to New York, Sal and his mother (Guay) are visiting Sal’s sister and her husband for the holidays in North Carolina when Dean turns up with Marylou and friend Ed Dunkle (Morgan) and offer to drive Sal and his mom back up to New York in exchange for a place to stay for the night and a meal. Sal’s staid sister and family aren’t quite sure what to make of the intruders.

After getting back to New York and spending some time partying, Sal decides to accompany the three back to Denver. On the way they stop in New Orleans to pick up Ed’s wife Galatea (Moss) and to visit Old Bull Lee (Mortensen) and his wife Jane (Adams). They continue crisscrossing the country and as they do Sal noticed that women are getting left behind quite regularly both figuratively and literally not only by Dean but by all of them (the lone exception is Carlo (Sturridge) who is gay and is one of those left behind by the bisexual Dean). After a disastrous trip to Mexico in which Sal contracts dysentery, at last he will see Dean for who he truly is – and find inspiration in the process.

In all honesty I’ve been less a fan of the writing of the Beat Generation and more of…well, admirer isn’t quite the right term. The Beat writers were full of bullshit, but it’s an honest bullshit, a young man’s bullshit. This is a movie about self-fulfillment in all its forms. I have to admit I haven’t read the book; okay, I might have but it was so long ago that I don’t remember it and so it adds up to the same thing.  Therefore, I’m not really the one to evaluate whether the spirit of the book was captured so we’ll leave that as a N/A for now.

Salles, who is no stranger to road movies having directed the Che Guevara quasi-biopic The Motorcycle Diaries has a firm hand here and allows the allure of the road to shine through; the endless stripes passing by through landscapes mostly desolate but wonderful in their emptiness. However, keeping in mind that the movie runs about two hours give or take, that can only sustain a film so much.

The characters here are so incredibly self-involved that it’s difficult to find a lot of sympathy for the lot of them. Mostly they’re about indulging whatever hedonistic pleasure grabs them at the moment, and Dean is the mainstay in that regard. For Dean, friends and lovers are to be exploited, discarded when the need for them diminishes or when boredom sets in. He wants to meet people who have something to say that isn’t the usual postwar pabulum of pandering prattling polemic, empty of soul and emptier of head. That’s all well and good but what does interesting companions really do for you if you make no connection to them?

Admittedly the relationship between Dean and Sal is the centerpiece here in that there is more or less a relationship of mutual respect and debauchery but in the end Dean uses Sal just as thoroughly and just as despicably, maybe even more so than the others. Hedlund gives the performance of his career thus far in capturing Dean’s natural charisma and sensual charm that attracted both women and men to him like moths to a flame. Riley, a British actor who’s turned in some really incredible performances in his young career, is solid here as the yin to Hedlund’s yang, and to my mind it’s a generous move because by not shining quite so bright he allows Hedlund’s glow to be more noticeable and the movie benefits from it.

You can only take so much self-indulgent behavior and there’s really a whole lot of it here. There’s an amazing amount of smoking and drinking, not to mention a ton of sex and drug use. I don’t begrudge anyone who partakes in any of those things but it’s a bit more boring to watch than you’d expect.

This is a generation that is not unlike the 20-somethings that are out there right now; people trying to find their own way in a world that doesn’t really get them much, so they are forced to reinvent the world to fit their view. I can commend the ballsyness of the strategy but it doesn’t always make for good cinema unless of course these are your people too.

They aren’t really mine. There just isn’t any appeal in watching people indulge their most hedonistic and basic whims while forgetting to make any connection to other people. It’s an ultimately empty and meaningless pursuit. Life is about connections, not so much about carnality. It’s a lesson that the young learn as they get older, although some never learn it at all.

Some will look at these characters and see heroes bucking the system and living life on their own terms. I see people who screw their friends over and whose only concern is having a good time. One must grow up sooner or later (you would hope) and to be honest, watching this is like watching children acting out. Been there, done that, got the t-shirt – sorry if that means I fail the coolness test.

REASONS TO GO: Some good performances, particularly from Hedlund. Captures the allure of the road and the essence of the era.

REASONS TO STAY: Characters far too self-indulgent to connect to.

FAMILY VALUES:  A whole lot of sex, swearin’ and smokin’ of weed.

TRIVIAL PURSUIT: Producer Francis Ford Coppola originally bought the rights to the novel in 1979 and has been attempting to get the film made since then. 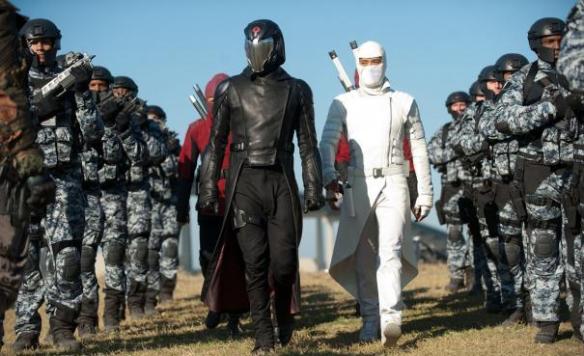 The Joes are decimated by a sneak attack but are shocked to discover that the strike was ordered by their own government – by the President, in fact. It becomes clear that the government has been infiltrated by Cobra, their arch-nemesis and at the highest levels. In order to survive and stop Cora from his evil plan they’ll have to call on some extra help – the man who started it all, G.I. Joe.

Rating: PG-13 (for intense sequences of combat violence and martial arts action throughout, and for brief sensuality and language)

(Open Road) Saoirse Ronan, Max Irons, Diane Kruger, William Hurt. The Earth has been invaded by parasites that take over the human body and erase their memories; the parasites are winning as the free human numbers are dwindling. A brave young girl will risk everything for those she loves and in doing so give hope to the human race that love can indeed conquer all. From the novel by Twilight series creator Stephenie Meyer.

See the trailer, interviews, featurettes and a clip here.

Rating: PG-13 (for some sensuality and violence)

(Sundance Selects) Garrett Hedlund, Sam Riley, Kristen Stewart, Amy Adams. A young writer’s life turns upside down when he meets a brash Westerner and his girlfriend. The three of them embark on a cross-country road trip to escape a world growing ever more conservative and conformist. Based on the classic Jack Kerouac beat novel.

Rating: R (for strong sexual content, drug use and language)

(Lionsgate) Jurnee Smollett-Bell, Lance Gross, Kim Kardashian, Vanessa Williams. A marriage counselor whose own relationship is rocky decides to be with another man. The repercussions of her choices send a ripple effect from her life to the lives of those around her. Based on Perry’s stage play Confessions of a Marriage Counselor.

See the trailer and a filmed version of the play the film is based on here.

Rating: PG-13 (for some violence, sexuality and language)