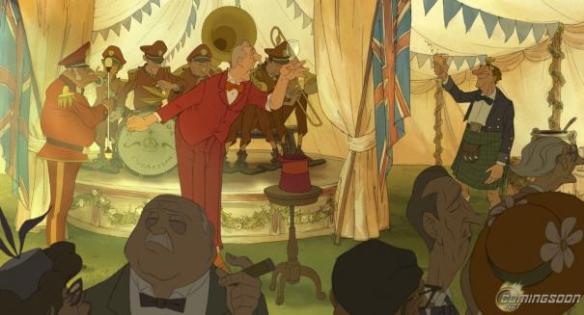 The Scottish audiences were most pleased when the Illusionist conjured Scotch out of thin air.

There comes a time in life when we realize that the world has moved on without us. Very few of us can keep up with progress, particularly when the careers we’ve labored at all our lives have been rendered obsolete, either through technology or simply through changing tastes. It is bittersweet; the sadness that which we have labored at no longer matters, but there is also a freedom in it as well.

Monsieur Jacques Tatischeff (Donda) is a stage musician and a good one. He has played all the finest music halls and vaudeville theaters in Europe. Now, it is the 1950s and the 1960s are right around the corner and the audience for his kind of entertainment is shrinking. Once a headliner, he is reduced to taking whatever bookings he can and has found himself in Edinburgh.

He has caught the attention of Alice (Rankin), the young chambermaid at the hotel he is staying in. She is dewy-eyed and innocent, her eyes wide and open, amazed by the illusions Monsieur Tatischeff conjures. His act has convinced her that there is real magic in the world and that Monsieur Tatischeff has access to it.

For his part, Monsieur Tatischeff is touched at the attention he is receiving – one last true fan. He looks upon Alice as the daughter he never had and showers her were gifts – new shoes, new dresses. He can’t afford them on the meager pay of his bookings, so he works odd jobs when he’s not onstage so that he can buy these things for Alice, who thinks he has conjured these fine things out of air. He wants her to continue thinking that.

But this is one illusion even a master Illusionist like Monsieur Tatischeff can maintain indefinitely and soon he is faced with the wrenching choice of revealing the truth to Alice or continuing the lie. Reality is fast catching up to him as it does with us all.

Chomet was the auteur behind the much-acclaimed The Triplets of Belleville. The script he’s working off of here was written by the great French comedian and actor Jacques Tati, who wrote this back in 1959 but for some reason never got around to filming it as a live-action film although there is evidence that he intended to. This is said to be a highly personal work for him; the Alice character may represent a daughter that he abandoned, although Chomet has said that Alice was really Sophie, the younger daughter who first gave Chomet the script to produce as an animated feature.

The movie is hand-drawn rather than computer generated. This process is tedious and labor-intensive and rarely used since Pixar took over the animation market. It also renders the movie more beautifully, resembling paintings more than anything else. This is animated art folks and is as beautiful looking (even in its tedious Edinburgh scenes) as you’re likely to see.

There is almost no dialogue – Chomet prefers to make his work more universal, so most of the sounds you hear are wordless, like acrobats exclaiming “Hep! Hep! Hep!” as they bounce around the screen. There are sighs and cries, but few words. In many ways this is like a silent movie, relying on the characters to tell the story without using extraneous words.

Tati was inspired by Charlie Chaplin (and there are those who consider him France’s Chaplin) and in a sense, this is a movie that Chaplin would likely have approved of. There is some pathos and the comedy is quirky and well choreographed. There is a definite melancholic air however that might be off-putting for some; after all, this is supposed to be at its heart about a father-daughter relationship. However, it is also about the end of an era, about a man having to accept that what he had done for a living all his life was no longer meaningful. There is nothing funny about be rendered obsolete, but there can be a catharsis in it and Chomet finds it.

This is a beautiful movie, if you can find beauty in sadness. There is some joy here as well, but I walked away from it feeling like you do after you’ve had a good cry although I shed no tears while I watched. It is certainly different than the offerings of Pixar and Studio Ghibli, the two leaders in modern animation. It didn’t connect with the audience sadly, although it did get an Oscar nomination. It’s one of those movies that a lot of people kind of turned their noses up at, but it is also one of those films that if you give it half a chance you are likely to fall under it’s spell.

WHY RENT THIS: Beautifully hand drawn with a marvelously bittersweet story on aging and growing irrelevant.

WHY RENT SOMETHING ELSE: Almost no dialogue and a melancholic feel.

FAMILY VALUES: Some of the themes here might be a bit difficult for smaller children to work through. There are also numerous depictions of smoking.

TRIVIAL PURSUIT: The Illusionist’s stage name, Jacques Tatischeff, is the real name of Jacques Tati who wrote the script.

NOTABLE DVD EXTRAS: There is an interesting feature that shows a scene being animated from storyboard to finished product.

NEXT: Attack the Block 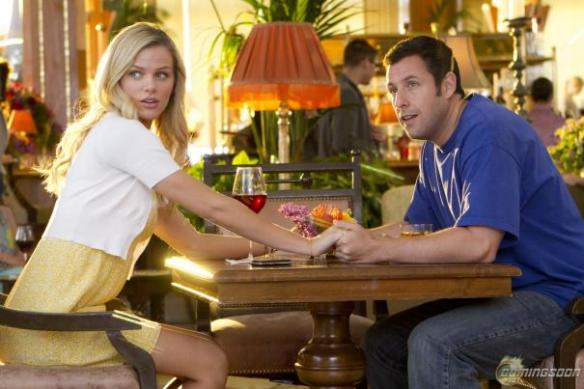 JUST GO WITH IT

An aging lothario who was once jilted at the altar is able to romance women by convincing them he’s a good guy in an awful marriage by wearing a wedding ring. This all works out nicely for him until he finds a girl he wants to marry – and she finds his ring. In order to save the relationship, he convinces her that he’s getting divorced but she wants to meet his ex. Desperate, he turns to his best friend to play the part of his ex. Cue comedy.

(Focus) Channing Tatum, Jamie Bell, Donald Sutherland, Mark Strong. A young Roman centurion is assigned to Briton, determined to discover the fate of his father who commanded the fable Ninth Legion which disappeared north of Hadrian’s Wall. Obsessed with restoring the family honor and retrieving the Eagle, symbol of the Legion, he ventures north to investigate rumors that it had been seen there, accompanied only by his slave, whose identity may tie in with the secret of his father’s fate.

Rating: PG-13 (for battle sequences and some disturbing images)

From Prada to Nada

(Lionsgate) Camilla Belle, Alexa Vega, Adriana Barraza, Wilmer Valderrama. Two spoiled Latina sisters find their world turned upside down when their father passes away suddenly, leaving them penniless. They are forced to trade their Beverly Hills mansion for a Boyle Heights home with their lively aunt. They will learn the meaning of family, the importance of their cultural heritage and how to live without Gucci.

Rating: PG-13 (for brief drug use and a sexual situation)

See the trailer, clips, interviews, featurettes, a promo and a music video here.

(Sony Classics) Starring the voices of Jean-Claude Donda, Elidh Rankin, Duncan MacNeil, Raymond Mearns. The newest animated film from the director of The Triplets of Belleville is based on an unproduced screenplay by the great French comedian Jacques Tati. It concerns a down on his luck stage magician in the 1950s who finds his profession being eroded by rock and roll. In a remote Scottish village, he encounters a young girl who will change his life forever.

See the trailer, clips and an online review here.