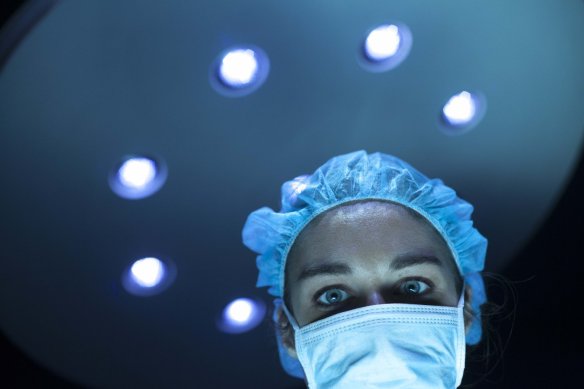 There aren’t a lot of things we can be sure of in this life but one is that our thoughts are our own. However, technology is coming in which perhaps we cannot even be sure of that any longer.

Holly Kane (Averton) is a psychiatrist in Brighton who has come up with a means of implanting thoughts into the heads of other people, using sensory deprivation tanks and subliminal audio. She may seem a beautiful, competent professional on the surface but just below she is deeply terrified of becoming like her sister Rosalyn (Barker) who is committed to a mental institution.

Her technique is too much like brainwashing and after being invited to help a patient undergoing an appendectomy do so without anesthesia strictly utilizing her technique, she finds herself being sued by the hospital that asked for her help. No good deed will go unpunished, right? However, her savior comes in the form of Marvin Greenslade (Henson), a pioneer in the field of subliminal communication and a personal hero of hers. He offers to fund her research and gives her office space in his building to do it. Although he’s 70-something, he is clearly attracted to the much younger Holly.

Holly’s personal life is pretty much a mess; her best friend is Jeannie (Campbell) who in addition to being a brilliant chemist is also a bit of a party girl. She is the one who is supplying Holly with the highly illegal substances she needs to concoct a liquid that opens up the mind for adjustment. It also provides a psychedelic trip that while it wouldn’t do Kubrick proud is nonetheless fun to watch.

She’s also getting into the handsome young Scot Dennis MacIntyre (Rose) who although a bit on the scruffy side is nonetheless quite into Holly. However, she calls it off with him when she finds out from Greenslade that he’s a former spy; she lambastes him for lying to her – a lie by omission but still. In any case, as Dennis begins to dig deeper into Greenslade, it turns out that Marvin isn’t the wonderful guy he makes himself out to be. He’s got government connections at the highest levels and might be looking to use Holly’s technique as a means of brainwashing terrorists. He also is using her own technique against her to make her believe that she wants to have sex with him and she eventually does although judging from her expression she’s clearly not enjoying it. He also uses the subliminal audio to tell her to trust only him and to distrust Dennis. Using some nasty spy sorts like, for example, Carl Gower (Neal) who also messes up MacIntyre’s mind when he starts to get too close, Greenslade has eyes and ears everywhere. Can the two escape the clutches of Greenslade before he wipes out their minds permanently?

What I liked the most about this film is that it really evokes a 70s espionage film vibe from the pulsating electronic score to the paranoia to the plot twists and turns. While the suspense for the climactic chase isn’t built up as much as I would have liked, nonetheless this had a distinct cold war feel to it You were never quite sure who you could trust.

The character of Holly Kane is written a bit strangely. At times she’s emotionally closed off; other times she’s very emotional as when she visits her sister after a long absence. Averton plays her as well as can be expected, particularly during one of the most curious sex scenes in movie history when she has sex with Greenslade; her face is so emotionless and her body is so rigid that Greenslade may as well have been schtupping a plank. Otherwise Averton plays Kane cool which goes along with the overall vibe. Even when she’s partying Holly is a bit on the reserved side. There’s a scene in the deprivation tank in which Holly is masturbating which kind of comes from left field; even there her expression is almost clinical.

I’m not sure why the psychiatrist has to look like a super-model. I am also not sure why that she has to be saved from rape and brainwashing by a man who is at least as in trouble as she is. After going to the trouble of establishing Holly Kane as a strong, independent and brilliant woman, writer Mick Sands then turns her into a typical victim. Just once I’d like to see a woman like Dr. Kane not need rescuing from a guy but be able to take matters into her own hands.

The chase scene as Holly and Dennis try to escape the clutches of Greenslade and his goons is oddly flat. One doesn’t get the sense of imminent danger that should go with a scene like this. Time and time again, goons burst into the place where they think the two are only to find them gone. I don’t remember seeing their pursuers in the same frame as them at any time during the chase. It could have used a little more of a thrill factor.

Despite the flaws this is a satisfactory film and even a little bit more. It gets the tone right and although it could have used a bit more oomph in the suspense generation, it nonetheless keeps you guessing until the final chase. Considering the miniature budget for this thing, there’s a lot of bang for your buck here.

REASONS TO GO: The atmosphere and paranoia of a 70s espionage film is recreated here in a good way. The concept that both the heroic leads may be clinically insane is interesting.
REASONS TO STAY: The film feels anti-climactic towards the end. The surveillance photo stops get to be annoying after awhile.
FAMILY VALUES: Sensuality, some nudity, rape, drug use, violence and profanity throughout the film.
TRIVIAL PURSUIT: Tom Sands directed his first feature, Nazi Vengeance (2014) at the age of 24. His brother Mick wrote both of his features to date.
BEYOND THE THEATER: Amazon, Google Play, iTunes, Vudu, YouTube
CRITICAL MASS: As of 4/26/17: Rotten Tomatoes: No score yet. Metacritic: No score yet.
COMPARISON SHOPPING: The Parallax View
FINAL RATING: 6/10
NEXT: Bang! The Bert Berns Story