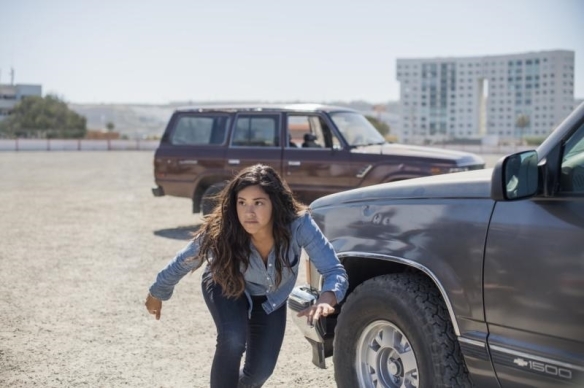 For those in the know, Mexico has a thriving cinematic scene that has produced such luminaries as Guillermo del Toro and Alfonso Cuaron, as well as some amazing films, like Y tu mama tambien and Amores perros, not to mention a stark thriller called Miss Bala.

That movie, Mexico’s official submission for the 2012 Best Foreign Language Film Oscar, had a lot going for it but was ultimately flawed, largely due to the somewhat one-dimensional nature of the lead character, although the actress playing her did a pretty good job considering that she didn’t have a whole lot to work with. In the American remake, Gloria Fuentes (Rodriguez) is an American make-up artist who returns to the place of her birth, Tijuana to help her best friend Suzu (Rodio) with her make-up for the upcoming Miss Baja pageant.

They go to a local nightclub so that Suzu has an opportunity to mingle with the judges, particularly Police Chief Salazar (Alcázar) whose vote is crucial to winning the pageant. However, while Gloria has excused herself to the bathroom, a group of heavily armed cartel thugs shoot up the nightclub. Gloria escapes but in the confusion can’t find Suzu. When Suzu hasn’t appeared by the next morning – and is not among the dead – she realizes that Suzu has been taken, but by who?

Gloria is kidnapped herself by the Las estrellas gang whose leader Lino (Córdova) who wants to make use of Gloria and promises to find Suzu if she does what she’s told. There are, as you might expect, plans within plans, plots stirring and double crosses across the board. A gruff DEA agent (Lauria) also wants to use Gloria to infiltrate the gang, and an American gangster (Mackie) warns that there is a DEA mole in the gang. What’s a girl to do?

Rodriguez, who was so good in Jane the Virgin in a comic role, shows leading lady presence not to mention some pretty decent action chops, although I kinda wish she had more opportunity to use them. She has “star” written all over her; unfortunately, in the time period we are currently enduring, her Hispanic background may be an issue with a segment of the moviegoing crowd which is a shame; she is absolutely terrific here.

The rest of the movie is basically a pretty rote action film which gets points for getting made with a predominantly Hispanic cast in the age of “Build that wall” but loses points for not displaying a ton of originality. A lot of the best elements of the original film were taken out, but one critical new element was added in; Gloria is no victim, regardless of her circumstances. That’s pretty refreshing to see a female in an action movie as strong and as capable as this one and not be played by Sigourney Weaver or Linda Hamilton.

REASONS TO SEE: Rodriguez is a terrific action star/leading lady.
REASONS TO AVOID: Would have been more effective with an “R” rating.
FAMILY VALUES: There is a fair amount of violence, drug and sexual content and plenty of profanity.
TRIVIAL PURSUIT: A remake of a 2011 Mexican movie of the same title.
BEYOND THE THEATERS: Amazon, AMC On Demand, AppleTV, Fandango Now, Google Play, Microsoft, Movies Anywhere, Redbox, Sling TV, Starz, Vudu, YouTube
CRITICAL MASS: As of 6/8/20: Rotten Tomatoes: 22% positive reviews, Metacritic: 41/100
COMPARISON SHOPPING: Columbiana
FINAL RATING: 6/10
NEXT: Parkland Rising